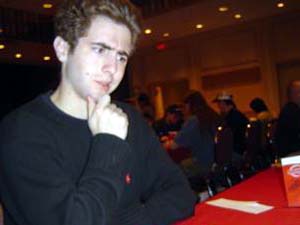 hailed as the Canadian savior of the Tournament Report, Vancouver's Jeff Cunningham has been keeping a low profile of late. This may be partly because of the scandal some have called "ModoGate". His reserved demeanor hides one of the country's best gamers. Unfortunately, his Nationals hasn't gone according to plan, and he finds himself starting the second day at 3-3, needing to win out for a place in Top 8.

Faced with a choice of Lightning Greaves, Nim Shrieker, Neurok Spy and Predator's Strike, Cunningam was torn. At the last possible second he put the Spy down in front of him and shipped the rest. Later he would describe this as an uncharacteristic move for him. He likes to draft very aggressive red-black decks, but acknowledges that they can be a gamble. Needing to win out, he decided a shift to blue-based affinity was in order. Reports that blue was underdrafted yesterday further convinced him this was the right move.

His next pack gave him an easy choice of Granite Shard over Aether Spellbomb, another Shrieker, and a Skyhunter Cub. The third pack was decision time: The best non-black card was Wizard Replica, but Irradiate was in there too. Cunningham stayed the course and shipped the instant. He also wasn't distracted by a pack with both Skyhunter Cub and Blinding Beam, opting to ship them and confuse his neighbors, taking a Mirror Golem for himself. He took Frogmite over Disciple of the Vault and Neurok Familiar, then a Talisman and Steel Wall. He rounded out the packs with some cycling Artifacts and mediocre creatures, until his Neurok Familiar came back to him thirteenth! Now he was cemented in blue.

Cunningham opened a busty Darksteel pack with both Echoing Ruin and Dismantle, Nurok Prodigy, Bola, and more white goodies than you could shake a stick at. He took the Dismantle. He didn't have to think hard before taking Barbed Lightning over Vulshok Morningstar in pack two, nor was it a stretch for him to take Arcbound Stinger over Neurok Prodigy. After an Arcbound Hybrid he got passed a pair of Vedalken Engineers that he took over a Stinger and Prodigy. Another Hybrid, Unforge and Prodigy followed.

Going into Fifth Dawn, Cunningham was optimistic. With two Engineers he could get some pretty savage Sunburst action, not to mention the overall strength of Fifth Dawn blue. He started off right, with an Energy Chamber that was downright goofy with his Modular men. Next he took Healer's Headdress over Advanced Hoverguard, a pick he justified as a combination of his dislike of the Hoverguard and his ability to get tricky with the Headdress thanks to the Engineers. Next came Baton of Courage, Thought Courier, and finally a Skyreach Manta. He scored some late Conjurer's Baubles and watched as two Cackling Imps and two Lose Hopes got shipped his way.

Overall Cunningham was pleased with the way his deck turned out. His one regret was that he hadn't taken the Irradiate early, because of its splashability in an affinity deck. He mused that if he had stuck to his red-black guns, his deck would have been insane. As it was he had a great curve, plenty of synergy and a few game-winning cards. He was confident he'd be able to 3-0