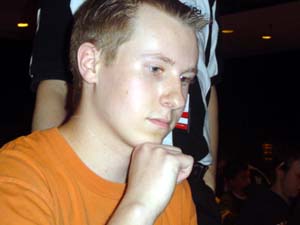 years ago, these two players were "young stars on the rise". After proving themselves, they've become mainstays of the Canadian pro scene. They've already rumbled this weekend, facing each other in the first constructed portion yesterday, with Evans emerging the victor. He needled Boileau about a suspect play in an attempt to get a mental edge, but Boileau would have none of it.

"So, why are you still getting Feature Matches?" - Louis Boileau

Boileau won the flip, giving him the critical ability to play first. He led with Forest and Oxidized a Vault of Whispers after Evans played a Disciple of the Vault. He untapped and Scryed up a second Urza land to go with his Mine. Evans hit for one with his Disciple and considered his next move. He chose to imprint a second Disciple on Chrome Mox and power out a Cranial Plating with a second Vault.

Boileau untapped and started thinking. After a minute's consideration he showed Evans Oxidizes numbers two and three, relieving him of his land and Mox. Evans attacked again and dropped another Disciple courtesy of City of Brass. Boileau cycled a Thicket and got back Oxidize with Eternal Witness. Both Disciples hit and the Witness took one down. A second Plating was hardly threatening. Boileau Scried up another Urza land and got ready to Oxidize.

Evans hit, lost a Plating, and played Night's Whisper. Even his minor beats were enough to put Boileau in a hard place. Boileau Mindslavered Evans to Fog and deal him two with his Cities of Brass. Boileau brought things back to manageable by chain-Witnessing two 2/1's into Mindslaver. On his next turn he activated the Slaver and then played a second Witness. That was enough to convince Evans to pack it in.

Evans kept a reactive seven-card hand and watched as Boileau mulliganed down to six. He drew cards with Night's Whisper then Stifled Boileau's fetchland on the third turn. When Boileau failed to play a replacement the following turn, Evans knew he was in the driver's seat. Between Ornithopter, Vault of Whispers and Blinkmoth Nexus he was able to power out a Thoughtcast with his lands.

Boileau watched as he dropped Frogmite and Disciple. His Wayfarer's Bauble was very sad to have only one untapped land. It turned out he had a lot less time than he tought. A turn later Evans was levelling two Shrapnel Blasts at his dome.

Boileau led with Power Plant. Evans put his Disciple on his Mox and put out a Ravager. Boileau made a second Plant and hoped for the best. Evans busted up a second Ravager and hit for three. Then, a Tower for Boileau, and a mighty Oblivion Stone. Evans put out a Disciple to punish him and ate another monster for more quick damage. 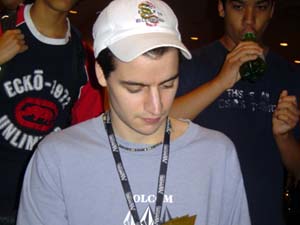 The slowness with which Boileau peeled his card indicated that he needed the fourth land. He peeked at it.

Evans devoured his board, powering up Ravager with an Arcbound Worker, and with help from the Disciple was able to kill Boileau that turn.