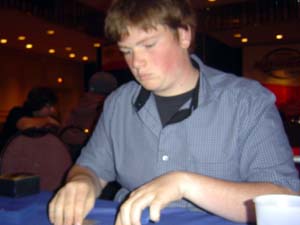 of these players won other tournaments to get to this point. London player and Magic community fixture, Mike Viner, won the right to play in this tournament during the first grinder on Thursday. He was trying to get maximum usage out of his invite after picking up three early losses. If he could win this round with his blue-white control deck he would be in a decent position to draw into the Top 8 next round.

Jason Gray is part of a group of solid young players from the Vancouver Magic scene. He is also the Vancouver Regional Champion and seemed somewhat awed to be playing on the feature match stage. He was playing Tooth and Nail.

Both players kept their opening hands. Mike opened on a Wayfarer's Bauble while Jason played an Urza Land. He had a Talisman on the second turn but stalled there. Jason Condescended a Sylvan Scrying and had a Mana Leak for one Solemn Simulacrum and Rewind for the next. He had already put five soldier tokens into play two turns back and when he Rewound the spell he made another six.

Jason grumbled some about his mana-screw but it was more or less an enforced mana-screw with Mike laying down the law.

Mike Viner reached over and flipped the tile next to his name over to indicate he was up one game to zero. Jason watched enviously. "I gotta win the next game. I want to change that." Jason opened on Urza's Tower and Forest into a Sylvan Scrying for a Power Plant. Mike cycled a Dragon for his third land. Jason's completed his set on the fourth turn and found another basic land with Solemn Simulacrum--he had eight mana on turn four.

Jason's Solemn got in for two points and he set Mike back with a Reap and Sow on an Island to find another Tower. He Sylvan Scryed for another Tower on the next turn but he had no action. Mike resorted to Bribery to get something into play and decided on one of Jason's Darksteel Colossus. Jason ripped another Colossus off the top and put it into play. He was able to sneak in two points with his Simulacrum since Mike did not want to give him any cards.

He blocked it on the next turn and Jason continued to thin his deck with a Foothills and a Sylvan Scrying. Mike bought back his Eternal Dragon and passed the turn. Jason tried to fire off a Mindslaver but when he activated it Mike had the Stifle. He played the Eternal Dragon and sent the turn back with the Colossi in the midst of a fierce staring contest.

Jason pumped the fist when his friends reminded him to flip over the tile next to his name. "If you beat Mike Viner you will be the best magic player in Canada."

"The guy you are playing!"

Mike mulliganed his first hand and frowned at hand number two before pitching it back. "No lands?" asked Jason.

Jason looked at his own hand a shrugged, "You're at five cards. I can keep anything."

Mike opened on Plains and Flooded Stand while Jason had the Sylvan Scrying for Urza's Mine. Viner had to snap his Strand and main phase cycle an Eternal Dragon for land number three. Jason played out Talisman and Vine Trellis. Jason continued to develop his mana with Solemn Simulacrum. Mike's Thirst for Knowledge found him the fifth land he needed to turn on a Temple and Mike Vengeance away the board.

Jason's Eternal Witness brought back a Sylvan Scrying and he found another Tower. Mike returned a Dragon. Jason tried to slow him down with a Reap and Sow on the Temple. He played a Triskelion on the next turn. Mike more than undid his mulligan with double Thirst for Knowledge EOT pitching a Bauble and Scrabbling Claws.

He untapped and Wrathed away the board falling to twelve from the Trike. When Jason attempted to pick something up with Eternal Witness he was Stifled. His Solemn Simulacrum shuffled his deck but could not find any basic lands left in the deck.

When Jason sent in his two guys a cycled Decree of Justice for three tokens took them both out. Mike returned an Eternal Dragon and played Scrabbling Claws. When Jason passed the turn back he cashed the Claws in for a card.

Mike played his Dragon and put Jason's deck on the clock. He tried a Witness but it was Rewound. His deck offered up a Mindslaver on the last possible turn before he would die to the Dragon but Mike was able to triple Mana Leak and Condescend for four. Jason was able to pay but it left him just shy of the necessary mana to activate the artifact. 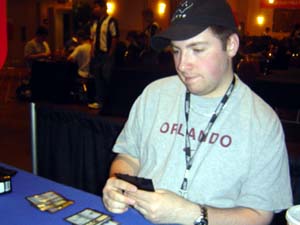 Mike was elated and a cheer went up for the popular player. Jason lowered his head to the table and reeling from coming so close to Day Three in his first major event and losing after his opponent double mulliganed on the play in the deciding game. Mike Thicke was confident that the young player will be a force in the coming season but that offered him little solace today.

Final result: Mike Viner defeated Jason Gray two games to three and was in an excellent position to draw into the Top 8 provided he did not get paired down.