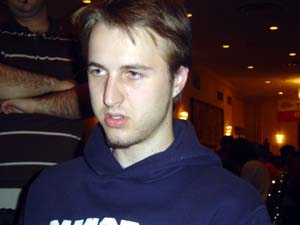 Regional Champion Sacha Bakht and Montreal's Guillaume Belanger sat down in the Feature Match area at 8-3. They consulted the pairings and standings, and Belanger was convinced that a draw would put them both in Top 8. Bakht was not confident in his tiebreakers, and forced a playoff.

Bakht was undaunted. He Thoughtcast, then used Night's Whisper. He dropped Ornithopter and Disciple before handing it back. Six damage from each Plating was bad news for Belanger. He played Thirst for Knowledge looking for a solution. Three Seat of the Synod was not his idea of help. He untapped, drew Discombobulate, and slumped. He put out Jens and passed it back.

Bakht played another Glimmervoid and a Pyrite Spellbomb. After paying for a Condescend for one he had seven artifacts in play, enough for a free Enforcer. That put the double Plating well above lethal.

A nearby Josh Rider couldn't help but cheer for Bakht's Game 1 victory. Bakht remained impassive, showing grace under pressure. You'd think this was round one of the tournament, not the match to decide Top 8.

Belanger mulliganed into two blue, two mana leak, Magma Jet and Thirst for Knowledge. He Leaked Bakht's two Ravagers, then after Disciple of the Vault, a Cranial Plating. By turn five he still had just island and Seat of the Synod in play. Pounding his deck was useless. 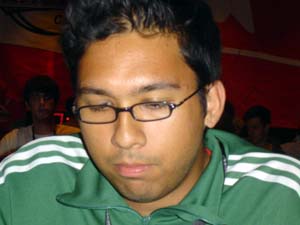 Bakht hit for one, Thoughtcast, and passed it back. Belanger drew island. Bakht domed him with Shrapnel Blast at end of turn. He untapped and swung in with his Disciple. Belanger thought, then fired Echoing Truth at it. In response, Belanger showed him two more Shrapnel Blasts. That put him to one.

Belanger untapped, drew Electrostatic Bolt, and went for Thirst for Knowledge. He needed mountain to stay alive. He drew Bolt, Bolt, island, and extended the hand.