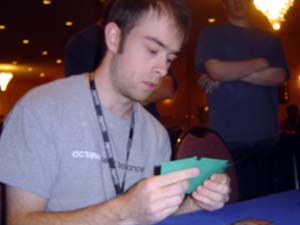 was the last player with an unblemished record coming into today's action. He defeated Mike Thicke in round six yesterday to accomplish that feat. The Ottawa based player qualified for this event after he finished in second place at the Montreal Regionals. He had never participated in a tournament of this magnitude before but had acquitted himself quite nicely to this point. His deck was red-white with a smidge of blue to make his Cobalt Golems fly.

Mike Thicke was hoping to avenge his loss and secure a spot in the Top 8 with a run through the first three rounds of play today. You could not ask for much better opens in three packs than what Mike snagged in the draft. Mirrodin gave him Looming Hoverguard which he followed with Fireball and Grafted Wargear. His deck was white-blue touching red.

Both players kept and Thicke got things started with an Auriok Bladewarden. It got in for a point of damage and then Mike stalled on lands--he did play a Vulshok Morningstar. Kai played Goblin Brawlers while Mike's land continued to evade him. He equipped the Auriok and swung for three. Kai cracked back and then considered committing more critters to the board or Arresting the Bladewarden--he played another Brawler.

Thicke was glum as he tapped out to play an Alpha Myr on turn five. Kai Arrested the Bladewarden and stayed back with his brawlers when it pumped the Myr. Mike found land number three and slapped a grafter Wargear on his Alpha Myr.

Kai could not attack without losing a Brawer and merely played a Copper Myr. Thicke found a fourth land--and his third Plains--and forged a Razor Golem without an attack. Kai used his Copper Myr to pay for his Vulshok War Boar and passed the turn with the two growing armies in a Mexican stand-off. Thicke blinked first and put the Morningstar on his Alpha Myr and sent the 7/5 critter into the red zone. Kai considered blocking but took seven. Thicke moved the Morningstar over to his Golem post-attack.

Mike was still stuck on four mana while Kai had enough to play Rustmouth Ogre and still have mana to spare. Thicke played his fifth land and sent both his guys into battle. Kai double blocked them both--two Brawlers in front of the Myr and the two five power guys in they way of Razor Golem. Mike killed everything but the War Boar when he Stirred the Pride.

Kai attacked back with the War Boar and Mike fell to thirteen--Kai was at nine but had no play. Mike thought about moving the Morningstar back to his Myr but was concerned about Soul Nova--Kai was seated to his right in the draft and he had no idea about the Mirrodin or Fifth Dawn cards Kai might have picked up. After much deliberation he moved the equipment and attacked, Kai tapped six mana and…doubled his life total to eighteen with Beacon of Immortality. He dropped to eleven after damage. Mike made a 2/2 Suntouched Myr.

Kai attacked for five. Mike took it and nodded at the post attack Cobalt Golem. The Suntouched Myr tried to acquire a Healer's Headdress but Kai Electrostatic Bolted it in response--he was out of cards. Mike attacked and the Cobalt Golem stepped off the curb into the path of the oncoming truck.

He took Mike to three with his War Boar and used his just drawn Unforge on the Wargear--killing the creature to boot. Mike reeled at the top deck, "Why am I not surprised?"

Mike was frustrated and had to play a Titanium Golem that was on chump detail. Kai top decked a Brawlers and Mike had to scoop with blue cards in his hand and only Plains and Mountains on the board.

Mike led things off with a Leonin Squire. He had three types of land by turn three when he made a Suntouched Myr. Kai had a Brawler for turn three but it could not stop the Myr from getting in there. Mike played an Alpha Myr after combat.

Kai clogged up the ground with Auriok Salvagers and followed it with a Thermal Navigator when Mike remained stuck on three for two turns. He followed with Loxodon Mystic and when Mike found land number four it offered no help.

Kai passed with six mana up. Mike announced his attack but did not have any to declare when Kai passed. The Ottawa player doubled his life to thirty EOT. He had no play on his turn but was holding a grip of removal. Mike played a Trinket Mage after a null attack and found an Aether Spellbomb. Kai tapped the 3/3 Myr EOT.

Kai decided to send his three men into Mike's army and Thicke considered his blocks while Kai leaned his head back and looked at the ceiling. Mike triple blocked the Mystic with Mage, Squire, and Navigator. Kai Rain of Rusted the Navigator and Electrostatic Bolted the Mage and took out all three gray ogres.

Mike attacked back for five and played a five-mana Razor Golem. Kai tapped it and attacked for four. He played a Copper Myr. Mike's Grafted Wargear was picked up by an Alpha Myr and Mike got in for eight despite an Unforge in Kai's hand.

Kai made a Pentad Prism and passed the turn. When Mike announced an attack step Kai had no response and Mike sent in the Alpha Myr. Kai pushed his Brawler in front of it and cast Stand Firm. With first strike on the stack Mike cast test of Faith and his Myr became a 5/4 and an 8/6 with Grafted Wargear…but Kai was still hording his Unforge.

Kai tapped the Razor Golem EOT and the Suntouched Myr on his main phase and attacked for three. He then took out the Wargear and the Alpha Myr with the Unforge. Mike cracked back for six and was confused when Kai took six and put a white mana into his pool from the Prism. He killed both men with Retaliate. Mike chose not to save one of his men with the Spellbomb and played a Titanium Golem instead. Kai played a Cobalt Golem and Mike Fireballed the Mystic on the next turn. He was a turn or two from stabilizing.

He grew nervous when Kai removed the last counter from the Prism to fly over for two but he still had the Spellbomb as a security blanket. He finally found a sixth mana and was able to Looming Hoverguard the Cobalt Golem. Kai replayed it and sat with his head in his hands--Mike's hand was chock full of spells while he was down to one card.

Mike sent in both his men and Kai considered a block. He put Copper Myr in the way of the Golem and Mike Stirred the Pride to gain ten life. The race had swung in his favor with Mike at fourteen and Kai at six. Kai drew another Cobalt Golem and played it but was not happy about how the game had turned. Mike attacked in the air and built up his air force with a Skyhunter Patrol. Kai had a War Boar but it did not prevent five points in the air and they were on to the rubber game.

Kai quickly announced he would keep his hand while Mike could not stand pat on five lands and no creatures. He sent it back and Kai looked back nervously at the clock which was ticking down under six minutes. He kept the next six.

Mike's turn two Pteron Ghost was followed by a Whispersilk Cloak from Wang. Mike's draw was pretty saucy though and he used a Trinket Mage for Aether Spellbomb. Kai played Frogmite but took three. Mike stumbled on his mana development for a turn but still played Healer's Headdress and the Spellbomb.

Kai cracked for two with Frogmite and played a Loxodon Mystic. Mike bounced the Mystic, attacked for three and dug up the trinket with his Leonin Squire. He replayed it. Kai tried to slow down the ground assault with a Goblin Brawler and equipped his Frogmite for two points of unblockable beats.

Mike came back over for five and Kai fell to eight. Time was winding down and the game was going to come down to extra turns. Kai had turn zero meaning Thicke would get to have the last turn of the game if it went that far. Kai passed without a play. Mike attacked with everyone. Frogmite went toe to toe with the Squire while the Brawler tussled with the Mage. Both players cast Stand Firm. Mike considered his scry cards. He pushed one and left a Morningstar on top. First Strike went on stack and Mike cast Test of Faith. Kai had Barbed Lightning in hand but could not use it without Mike saving his guy with Healer's Headdress. He chose to Lightning with entwine the Squire instead and Mike moved the equipment there instead. Mike lost the Squire but still had a 5/5 Mage and 1/1 flier with a Morningstar coming. 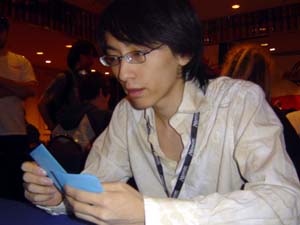 Kai cast and cloaked his Loxodon Mystic but it needed to block the 5/5 Mage. He one turn to draw Beacon for the tie but when he peeked at his card on the fourth of extra turns he congratulated Mike on a good match.

Final result: Mike Thicke defeated Kaixin Wang two games to three. There were no longer any undefeated players in the tournament. There were less than a half dozen players left with only one loss and a horde of players trying to crawl up the standings with two and three losses.