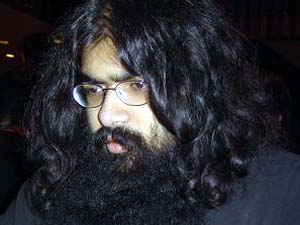 round saw Newfoundland's Rahul Chandra square off against Ontario PTQ regular Jingpeng Zhang. Chandra's weekend has been exceeding expectations: He ground in on Thursday and then managed a 5-1 Day 1. Zhang was no slouch either, with 4-1-1. Both won their first round today.

Chandra led with Viridian Longbow after Zhang showed him Wayfarer's Bauble. That let him accelerate into a third-turn Rustspore Ram on the Longbow. Chandra, meanwhile, wasn't going anywhere, as his deck had decided that two mountains were all that he needed. He watched as Zhang spilled Spikeshot Goblin and Pteron Ghost onto the board. Then came Ingot and Auriok Glaivemaster, increasing the anemic beats.

Chandra pulled up a Talisman of and was beaten down to thirteen. Zhang added Hematite Golem to the board. Chandra played a Stoker and traded with a Glaivemaster, but without another play, was forced to scoop.

"I suppose I had this coming to me after my last draft. Yesterday I was playing the six land destruction draft deck." - Rahul Chandra

Chandra started the beats with a third-turn Battered Golem that earned a Purge from Zhang. He replaced it with a Dross Prowler. Zhang put down a Clockwork Condor but refused the trade. Chandra's parade of misfits continued with Krark-Clan Stoker. Zhang hit with his Condor and passed on five mana, waiting on Soul Nova.

Chandra didn't give him any tasty targets, merely hitting for four. Zhang allowed it. Chandra showed him a Nuisance Engine. Zhang untapped and locked things up with an Ensouled Scimitar on his Condor. Chandra could only play an Alpha Myr and wait on his Engine. Together with his Stoker he could finally get past the four mana mark.

Zhang hit for three and passed it back. Chandra swung in with Myr and Prowler, forgetting about the Scimitar's ability. Zhang ambushed the Prowler. Chandra shrugged it off. He powered out a Vulshok Sorcerer and through the Stoker a Fireball for three, finishing off the Scimitar and the 1/1 Condor. Zhang was on the back foot.

He untapped and dispatched the Sorcerer with Barbed Lightning, then raw-dogged Rustspore Ram before passing it back to Chandra. With a hint of a smile he played Cranial Plating, getting an exasperated sound out of Zhang. He swung in with the equpped stoker and left Zhang at six. Zhang made no play, but chose to chump with his Ram rather than Soul Nova, for fear of Chandra countering by activating his Stoker.

Zhang tried to steady his defenses with a 3/3 Suntouched Myr and an Arcbound Bruiser. Chandra untapped and chuckled. He activated his Engine and then revealed the Barter in Blood he drew. The remaining Alpha Myr hit for six exactly.

"You can't have a Feature Match not go to six games. They're here for the show." - Rahul Chandra

The show shortened considerably as Chandra went down first to six, then to five cards in hand. Zhang led with Wayfarer's Bauble while Chandra played a late Myr Moonvessel, getting a laugh from Zhang and the onlookers. 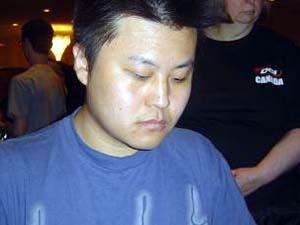 He did have a Lose Hope to stop Zhang from getting busy with Auriok Glaivemaster and Horned Helm, then busted out the Stoker that had served him so well in Game 2. Zhang showed him what a real creature looks like when he played a 3/3 Suntouched Myr and put the Horned Helm on it. Chandra played Darksteel Pendant and accepted the beats. Zhang put out Talisman and Thermal Navigator. Chandra went looking with his Pendant but didn't find what he was looking for. He had no play on his turn.

Zhang brawled in with the Myr, and Chandra blocked with Moonvessel. After stacking damage (forgetting about the Helm's trample), Chandra Unforged the Helm. Zhang showed him the mighty Hallow for the save. Chandra's next play of Nuisance Engine wasn't looking up to the task of beating Zhang's 3/3's. He fell to seven. A turn later he succumbed.