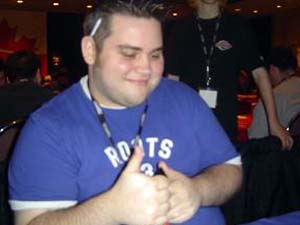 Rood is most well known as a member of 2020 the team that went to the finals against Phoenix Foundation two years ago and then lost to PS2 in the finals of the Masters event at Venice. He is widely regarded as a Limited specialist. His reputation has been reinforced after he started out his tournament with an 0-2 skid. He knocked Gary Wise to an 0-3 start in the third round of Constructed and looked forward to righting his ship on the more familiar waters of Limited. He had gone 5-0 in Limited to this point and was facing off against Geordie Tait's foil, Phil Samms.

Phil also got off to an inauspicious start during the constructed portion of the event with an unlikely 1-0-2 record. Phil is most well known for his regular appearances in Geordie's columns. He has also been the subject of several barbed T-shirts that Geordie had made up for this event--not all of them fit for print on a family website. He was not bothered by that as much as by being in the feature march area. "Oh dear…now everyone is going to know how bad I am."

Samms had a turn one Bola and Rood came back with an Engineer. Samms' second turn saw a Thought Courier land in play or "Looter" as Samms announced it. Rood played a Krark-Clan Grunt and when he tapped his Engineer Samms announced, "No blocks" and adjusted his life total but Rood was tapping for mana and making a Skullclamp for his Grunt.

Samms passed the turn and Rood cast Aether Spellbomb. He was suspicious about the fact that Sams chose not to put the Bola on the Thought Courier. "Why didn't you equip. What is going on?"

Rood was wary and played a Neurok Transmuter before attacking with Grunt and Engineer. Samms took four and looted EOT. He played a Vulshok War Boar and sacrificed the Spellbomb. Rood stared at his mana and tried to figure out how to do everything he wanted to this turn. Finally he brightened and used one of his blue sources to make his Transmuter into an artifact creature. He then was able to make two more blue with the Engineer to activate the Transmuter and take the War Boar with Domineer. He attacked and sacrificed the 5/5 to his Krark-Clan Grunt.

Rood grinned, "That was pretty sick. I almost missed it."

"I can lose now. I am just glad I made that play."

Samms cast Goblin Replica and equipped the Courier. He tapped the Grunt when Rood announced his attack step. Rood sent the Transmuter and before blocks he killed the faux-goblin with Barbed Lightning.

Samms played another Thought Courier and equipped the original. He fell to five on Rood's next attack and found himself staring down the barrel of a Goblin Dirigible at the end of the turn. He attempted to Electrostatic Bolt the Dirigible but Rood responded by activating the Transmuter and the Dirigible took two. Samms looked down at the on table trick and at the Transmuter he should have killed instead, "Yeah, don't write that one down."

When Rood cast Trinket Mage for Aether Spellbomb Samms nodded, "I'm not even going to slow play you. Scoop."

"I have to 6-0 Limited," declared Rood. He explained that his strategy was to not draft green--no matter what he opened. "I passed the guy next to me Troll Ascetic. I would even pass Molder Slug at this point rather than draft green. When I saw the Troll I was hoping for anything else to be there even an Iron Myr."

Samms had a turn two Leaden Myr with no play from Rood. He cheered when the Myr got though for a point of beats. "Yes, damage!" He played a Thought Courier and Rood came back with a Grunt. The players were whipping through their turns briskly and Samms tapped out for a 3/3 Skyreach Manta.

When Rood Trinket Maged for Seat of the Synod Samms shook his head, "Not even Skullclamp."

"Skullclamp is not any good," joked Rood. He actually needed to make a land drop. He played the Seat and sent in the Grunt. "No blocks," announced Samms.

Rood raised an eyebrow, "You sure?"

Samms was indignant, "I may be bad but c'mon." He played a Goblin Replica on his own turn. Rood sent in Grunt and Mage and Samms fell to fourteen and Annulled a Goblin Replica from Rood. Rood got all old testament on him and Shattered the Skyreach Manta.

Samms got in for two with the Replica and Rood went to fourteen. He played a Bola and equipped the Myr. The Grunt got tapped during the attack and he took two from the Mage. Rood played an Aether Spellbomb and Synod Centurion.

Samms looked at his life tally and tried to figure out his blocks. He put the Replica in front of the Mage and Thought Courier in front of Grunt. He looted away Sword of Fire and Ice and added two mana to mana pool. There was a life discrepancy and Rood turned out to be at fourteen not twelve. That changed things for Samms who floated two more mana and killed the Centurion. 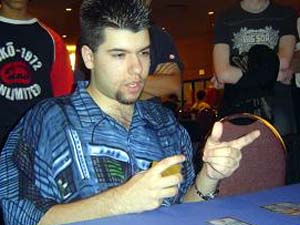 He was holding Pulse of the Forge. If Rood had actually been at twelve he could have burned for two, Pulsed once and then burned for two more during his upkeep to Pulse twice for the win. He needed one more land off the top for that to be possible. Rood was at fourteen though and he could only get him to two with the Pulse.

"Pulse is kind of scary," noted Rood as he pantomimed wiping seat from his brow.

Final result: David Rood defeated Phil Samms two games to none and managed a perfect 6-0 record in the Limited portion of Nationals. He needed to go 1-1-1 in the final half of Constructed to earn a Top 8 berth. Samms was still in a position to make it at 5-2-2 but he would need to sweep his last three rounds to do so.