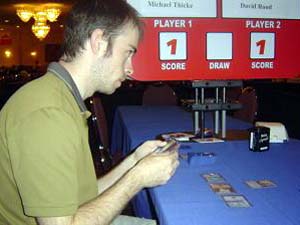 match would determine the player who would join Jingpeng Zhang and Murray Evans to represent Canada at Worlds this year. Before Rood finished his semifinal against Zhang, Thicke acknowledged that his matchup against Rood was better, but that he still hoped for Rood to win, since Rood deserves a spot on the National Team. That goes a long way to showing the kind of man that Thicke is.

Things were light as they shuffled up to begin the match. Rood was on the play and watched as Thicke Annuled a Cranial Plating that was destined for his Arcbound Worker. Thicke had nothing to do on his turn but Serum Visions, and watched as Rood played out a second Plating and hit for four.

Thicke took some more pain before hitting March of the Machines. Unfortunately for him Rood had a Shrapnel Blast to leave him at two, and Thicke was forced to scoop in the face of lethal damage.

Things went better for Thicke in the second game. He Leaked an early Frogmite, then did the same to Disciple and Annulled a Chromatic Sphere before untapping and busting out March of the Machines. Rood's Ornithopter kept him hoping for three turns, but then Thicke found Electrostatic Bolt to empty his side of the board, and he packed it in.

Rood sent back a landless hand and brought back one that was short on action. His Ravager was Annulled, then his next man was Mana Leaked. He got a Cranial Plating into play but could only watch as Thicke played a March on turn four.

Two turns later Magma Jet dispatched the Plating, and they were on to Game 4.

Rood started with Vault and Disciple, then had his Ravager Annulled. Thicke played his second land and waited on Mana Leak. Rood gave him a target in Disciple number two, but Thicke didn't bite. A Serum Visions on his turn revealed a Pyroclasm, just the thing for clearing up Rood's board. Rood hit for two and gave it back. 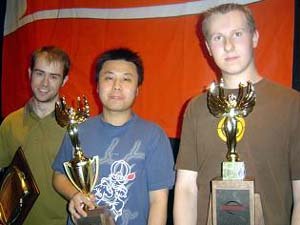 Thicke held back on his spells. Rood tried a Cranial Plating, and that merited the Leak. Rood didn't argue. Down came a Temple of the False God and Thicke Pyroclasmed with insurance against Mana Leak. Rood Shrapnel Blasted him while he could still get points out of his Disciples.

That was the last thing he would do. Thicke had found a March.