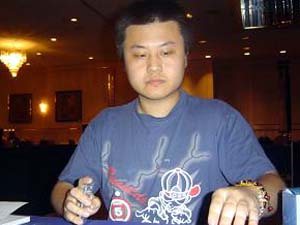 player JingPeng Zhang was playing an unorthodox March of the Machines deck with Obliterates. His deck featured counter magic, mass removal, card drawing, and Darksteel Pendants. To support all the different colors (Wrath, Obliterate, Condescend) he had to run Grand Coliseums and Mirrodin's Cores. The only card that mattered for him in this match-up was March of the Machines. It could single-handedly wipe out all of Murray's mana while giving himself an army of indestructible Pendants and Ingots.

Murray had faced down more than his share of artifact hatred all weekend long and the 2001 Canadian National team member (and 2004 member for that matter) had the extra advantage of playing with a handful of non-artifact lands to fight through a March and Mana Leaks to keep it off the table.

Both players were already locked in for the National team. The Captainship of the team and a small matter of a $1,000 difference between first and second place. Across the hall, Mike Thicke and David Rood were fighting out a similar match-up to determine who would join them in San Francisco.

The Mauler came roaring out of the gate after a mulligan form Zhang. He had an Ornithopter, Frogmite and Cranial Plating on turn three while Zhang had only a Darksteel Pendant. He played a second Cranial Plating on turn four. Zhang counted the artifacts in play and hesitantly allowed it to resolve. Murray gently placed a Great Furnace into play and attacked for a lethal eighteen points.

Murray kept a one land hand in the second game and led off with an Arcbound Worker. He missed his next two land drops and conceded when Zhang played a turn four March of the Machines.

Murray kept an opening hand that featured a pair of City of Brass and zero artifact lands. He decided to keep it and took some pain to cast a Worker. Zhang had a Grand Coliseum. Murray took two to play Cranial Plating and attacked Zhang to nineteen. Zhang played a Talisman.

Murray did not have a third land and fell to sixteen to equip his Worker and crack for three. Zhang played a Flooded Strand and both players fell to fifteen when he sacrificed it and Murray took one to Stifle. Zhang was frustrated and played an Ingot. Murray was still scuffling for land and took Zhang to thirteen. He fell to thirteen himself when he Mana Leaked a second Ingot from Zhang.

Murray attacked for three more and glared at the top of his deck. When he attacked on the next turn, Zhang Echoing Truthed the Plating and took one. He attempted a Disciple and it was Condescended. He played a second Disciple and that one resolved.

Zhang fell to six when he sacrificed a Strand and played March of the Machines. Murray tried to Shrapnel Blast for the win but Zhang had one more Condescend.

Murray reached into his sideboard box and took out a sleeve with an old piece of gum in it and worked the tacky confection free and popped it in his mouth. "Lucky gum," he explained.

Zhang mulliganed and kept a one-land hand featuring multiple Annuls and a Mirrodin's Core. He missed three land drops while Murray attacked with a doubly-Plated Worker and killed him on his five. 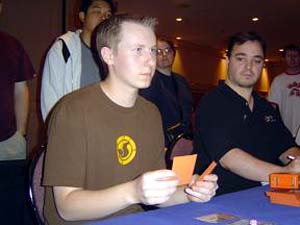 Zhang was still exhausted from his grueling five game match against David Rood in the previous round. "I am going to five again!" Despite the five game status this match was still faster than any other I have ever covered. Murray tapped out on his turn three to Thoughtcast and Zhang had a clear window to cast a turn four March of the Machines. Murray offered the hand.

Final result: JingPeng Zhang defeated Murray Evans in a dizzyingly fast five game match. The Toronto player was excited to be leading the Canadian National team and was looking forward to the rare opportunity to see friends from China who qualified for the Chinese National team.