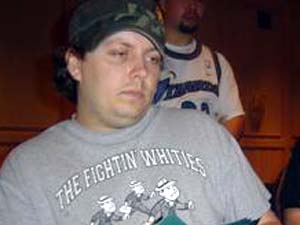 Howden came within a match of Top 8 in this building two years ago, but Boyd Hardie crushed his dreams. This time he had his berth secured before the final round. He's playing a very interesting blue-white control deck that sports the combo of Raise the Alarm and Proteus Staff to power out a surprise Darksteel Colossus. It's also got a strong suite of tools against Affinity, too bad for his opponent, Murray Evans. Evans was once called The Mauler, a JSS dynamo that could tangle with the big name pros. He's no kid anymore, and has become a Pro Tour Regular.

"I don't know if I'd call Alberta the Prairies. I figure it's just Saskatchewan and Manitoba." - Jason Howden

The match started with an air of friendly rivalry.

"I'll mulligan until I find the Raise the Alarm, you know that, right?" - Jason Howden

Howden won the flip and took his time considering a four-lander with Wrath of God, Mana Leak and Proteus Staff. He eventually chose to keep, as did Evans.

After a plains from Howden, Evans got himself a turn-one Ravager thanks to Chrome Mox. Howden added Flooded Strand to the table. He let Evans have a Frogmite, but when Evans tried a second one he searched up an island and Leaked it. Evans played Thoughtcast, City of Brass, and hit for one.

Howden made his third land and cast a Proteus Staff. Evans hit for three, played a fourth mana source and a Cranial Plating.

"Two mana open? For Mana Leak? I guess I better not Wrath then!"

Obviously he went for it, and no-one was surprised when Evans showed him Mana Leak. With Howden tapped out, Evans was free to swing in for ten and finish the job with Shrapnel Blast.

"Aside from one game where I cast four Night's Whisper and took a bunch of City damage, I have never seen your deck win." - Murray Evans

After shuffling, Evans noticed a dollar coin lying on the table and went to take it, but it belonged to the table judge.

"Look at this guy, always trying to mise. Did you think you were a big enough sack to get that draw AND find a loonie?" - Jason Howden

"I know you're well prepared for me this tournament." - Jason Howden

"Well, half of my testing was against various versions of Proteus Staff decks." - Murray Evans

Howden led with a Flooded Strand and fetched an island right away, before Evans could get any Stifling online. He allowed Evans a Cranial Plating on his second turn, then Annulled an Ornithopther. Evans had a second in hand. Howden was displeased. He took five on the next turn, and then Evans looked to make it five more. Howden's fourth land was a Flooded Strand and he sent it off, but Evans had the Stifle. Howden Condescended for one to keep Evans off Mana Leak for his next turn.

After Scrying and cycling a Secluded Steppe, Howden was set up for his Wrath. Evans rebounded with Arcbound Worker, and after Howden played a Temple of the False God he made a Frogmite and charged. Howden cycled Decree of Justice, but Evans was ready with a second Stifle. Howden sighed and took the Worker down with his Nexus. He untapped and Vengeanced, leaving Evans with only a City of Brass.

Now Howden was in control. He found another Nexus and started hitting, then Annulled a Ravager and Wrathed a Frogmite. By this point he was holding two Condescend and a Pulse of the Fields. When Evans's draws didn't turn up miracle cards, he scooped to inevitability.

Between games, Howden criticized Evans's decision to bring in Stifle against him.

"I could definitely be wrong, I only played six games and I don't really play Magic anymore, but it seems like a poor decision on your part. It's not like you're going to Stifle one of my lands." - Jason Howden

"It's not like it mattered. A threat would have been better there." - Jason Howden

"If I Stifle your land turn one, you're in trouble." - Murray Evans

"That's why I activated during my main phase, just in case you mis-sideboarded." - Jason Howden

Evans opened with Arcbound Worker and spent his second turn on Night's Whisper. When he attacked again into Howden's two mana, Howden dropped Raise the Alarm. Evans allowed it, lost his Worker, and followed up with Ravager. With only two land, though, he didn't want to have to sacrifice one protecting his Ravager from Howden's soldier token, so he didn't attack the following turn. He played Cranial Plating and passed it back. Howden continued to play lands.

"I doubt that." - Murray Evans

"Well I didn't draw Darksteel Colossus, like in your playtesting." - Jason Howden

Evans busted out Frogmite and then Thoughtcast. Howden didn't counter. Evans added Blinkmoth Nexus to the table and swung in with his Ravager. Howden blocked. Evans rescued by sacrificing his Frogmite, then went one more and ate his Cranial Plating. Finally he turned on his Nexus and piled the Ravager counters on it.

He started hitting for four. A Disciple forced a Wrath from Howden, but his life total was tumbling. Raise the Alarm gave him some pressure. Soon it was eleven to ten for Evans and the Nexus was swinging in again. Howden tapped four.

Evans fought with Leaks, but Howden paid for the first and Leaked the second one. He untapped and made an Angel with Decree of Justice. Evans played Thoughtcast, then conceded.

Evans started the fourth game with Disciple of the Vault and Cranial Plating, then Mana Leaked Howden's attempt to ambush with Raise the Alarm. Howden played a plains to go with his Secluded Steppe and Blinkmoth Nexus and passed it back. Evans played a Ravager and a free Frogmite before swinging in again.

"No way do you have dubs Raise the Alarm." - Murray Evans

Howden did not, and when he activated his Nexus to block Evans cracked it with the Big Shraps. That busted Howden down to two lands, bad news when facing down a board like Evans's. He cycled a Renewed Faith on his turn, then packed it in.

"You're a nice kid, Murray. I don't mind you. You deserve it more than I do. Not that that counts for anything." - Jason Howden

"Maybe I should have found some testing partners over the age of fifteen." - Murray Evans

Evans dropped an early Disciple and fearlessly swung in against Howden's two lands. Howden had no Raise, and accepted the damage. Evans followed up with Arcbound Worker and then tried a Frogmite, but it was Condescended. Howden's mana was a Coastal Tower and two Nexuses.

Evans couldn't attack, and so just Thoughtcast and then played Night's Whisper. Howden allowed them both. Howden played a Temple and passed it back. Evans dropped a second Disciple and swung in with Worker and Disciple, fronting his Shrapnel Blast. Howden was obliged to take it.

Finally his deck co-operated and gave him a second Coastal Tower, turning on his Temple. Evans gambled and swung in with is men. It was costly. Howden cycled Decree of Justice and Evans had no Stifle, and lost both of his Disciples. Evans set about rebuilding. He hit for one and added Frogmite to his team, and tried not to cry when Howden bought back Pulse of the Fields. He started mana burning to turn it off, and Howden cashed it in for an extra four life.

On Evans's next attack Howden turned on his Nexus and blocked the Frogmite. After Howden pumped to 3/3, Evans sacrificed his Worker to Shrapnel Blast Howden, putting the modular counter on his Frogmite and enabling the trade. Both players did nothing for a turn. Howden's Thirst for Knowledge got him a pair of Raise the Alarms, and he cast one. 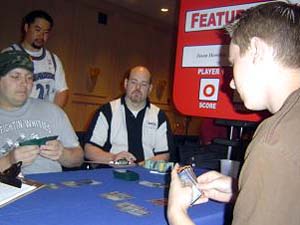 He untapped and swung in, including his Blinkmoth Nexus. He was holding Altar's Light and planning to take down Evans's Nexus. Unfortunately, by swinging with his own Nexus he'd left himself a little light on mana. Evans was able to Leak twice, and pay for Howden's Leak. His Nexus lived, and best of all, Howden was tapped out.

It was a huge opening for Evans. He played Night's Whisper, then Cranial Plating. He turned on his Nexus, equipped it and swung. With all his artifact lands it was enough to put Howden in Shrapnel Blast range. He showed Howden the red instant, and the crowd applauded.