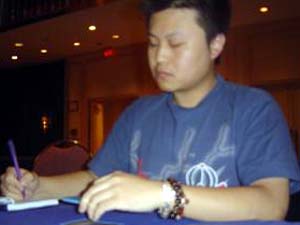 Jingpeng Zhang is definitely playing the deck of the tournament. His Obliterate deck worked wonders against the control-heavy field, and with March and a solid board, he has plenty of game against Affinity. The same can't be said about Rood's Affinity. His appearance in the Top 8 was won in the Limited portion, where Rood swept all six rounds. Before the match, Rood's 2020 teammate Elijah Pollock confided that it was a tough match for Rood.

Rood won the critical coinflip and opened with Arcbound Worker. Zhang played Mirrodin's Core and passed it back. Rood hit for one and then showed that he had the draw to beat: Double Frogmite, Disciple of the Vault. Zhang charged up his Core, then played a Talisman of Progress and took a point to set up with Serum Visions. He was short on lands, and facing a heck of a clock. He kept Wrath of God on the top.

Rood stared at his hand, calculating a play, then suddenly did a little jig in his chair. The math had worked out in his favor. He played Great Furnace, Ornithopter and Arcbound Ravager. He swung in and sacrificed the Worker and all his other Non-Frogmite artifacts. The Disciple damage plus the modular counters did exactly enough damage to finish off Zhang.

Zhang turned up a seven card hand of mana and two Echoing Truths. He shuffled it back and forth, but couldn't convince himself to keep it. His next six were three lands, Thirst for Knowledge, Mana Leak and Echoing Truth.

"That's only the second time my opponent has mulliganed all weekend. They must have been keeping bad hands." - David Rood

Rood took one look at his opener and shipped it back.

He stayed on his six. He led with Worker and Ravager. Zhang let them in, then countered Rood's attempt at a Cranial Plating. Rood considered his next play, then made an Arcbound Worker. He attacked and sacrified it, putting a counter on each of his creatures, dealing four.

Zhang played a fourth land and a Talisman, then gave it back to Rood. Rood hit and sacrificed his Darksteel Citadel for an extra point, leaving Zhang at ten. He had Seat and Glimmervoid open. Zhang Thirsted at end of turn, pulling up Condescend, Pyroclasm and Wrath of God. He pitched Pyroclasm and Grand Coliseum. He untapped and drew March of the Machines.

Fearful of a Mana Leak, Zhang passed it back to Rood. Rood bashed for another five to leave Zhang at five life. Zhang Truthed the Ravager at end of turn, and Rood jumped the gun with Shrapnel Blast. Zhang Leaked it, untapped, and dropped March of the Machines. He had his Talisman left over, and so could block the big Worker. Wrath of God left Rood without permanents, and from there Zhang was able to win easily. 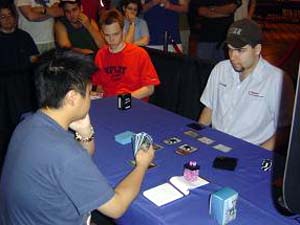 The worst part was that if Rood had just waited on his Shrapnel Blast until Zhang had showed the March, the game would have been his. Zhang could have Leaked, but would have had to tap his Talisman, and would have been unable to stop the Worker.

Rood went down to six cards for the third game. He opened with Vault and Disciple, but could only swing for one on his second turn. He had an Arcbound Worker on his third turn, but still no second land. Zhang cleared the board with Pyroclasm, then when Rood did nothing else, Marched him right out of the game.

Rood started the third game off right with Worker and Cranial Plating off two Artifact Lands. Zhang was on two plains, and could only drop his Talisman of Indulgence. Rood made a Ravager and hit for six.

Zhang, holding Wrath and March, failed to draw a land. Rood bashed him for nine, then played a Disciple and sacrificed enough permanents to finish him off.

Zhang had to send back a one-lander, but got a strong six that included Mirrodin's Core and a pair of Pyroclasms, along with some other lands. Rood opened with Arcbound Worker off a Citadel, then played a second Citadel and Chromatic Sphere. Zhang played lands, waiting on his countermagic and sweepers.

On his third turn Rood tried a Myr Enforcer and was Annulled. When Zhang didn't play March of the Machines on his fourth turn, just a Talisman of Progress, Rood breathed a sigh of relief. He untapped and Thoughtcasted after playing his fourth land. He dropped a Disciple of the Vault.

Zhang was finally convinced to 'Clasm his board. Rood cracked his Sphere for mana and sacrificed his Worker to Shrapnel Blast. Zhang Condescended and saw Wrath and Condescend. They both stayed on top. Rood came back with Arcbound Ravager and Slobad, Goblin Tinkerer, leaving him with two cards in hand. Zhang Pyroclasmed after drawing the Wrath. Rood sacrificed two lands to keep his Ravager as a 3/3. He untapped, swung, and ate one more to make it four damange.

Zhang drew his Condescend and accepted another four. Rood sat on three lands. With only six lands, he couldn't protect Wrath from Mana Leak if Rood had it. He took four more and fell to three. He ripped a land and Wrathed. Surprisingly, Rood had no response. He untapped and tried a Thoughtcast, but because it cost three Zhang was able to Condescend and send two lands to the bottom of his library.

He drew Mana Leak, Wrath of God and Echoing Truth while Rood pounded his deck but received no help. 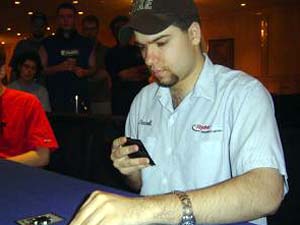 He played a pair of Cranial Plates while he begged for a Shrapnel Blast to go with his five lands. Finally Zhang found a March to take command, and Leaked Rood's Leak. Rood failed to draw a Disciple to go with his pair of Plates, and after Zhang blocked with his Talisman he was at one. Echoing Truth sent the other one home and took out Rood's Glimmervoids.

Rood watched as Zhang drew into Ingot and started hitting. When he played Ornithopter and Glimmervoid, there was a moment where the spectators thought he was going to show Disciple of the Vault and steal the win, but he only had Arcbound Worker. A Wrath from Zhang gave him the game and match.