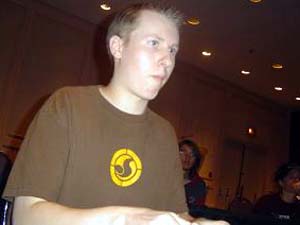 "The Mauler" is a popular fixture on the Canadian Magic scene. He was a member of the National team in 2001 and was the most experienced player in the Top 8 after David Rood. He had a vocal row of supporters along the rail and they teased him after a coin toss. Let's just say they accused him of a less than manly coin toss.

Murray wheeled around and fired the coin into his startled friend's chest, "How about this coin toss?"

Mike mulliganed his opening hand. Murray opened on a Nexus and Worker. "Need a counter Murray?" offered a friend. City of Brass powered out a Ravager. He had another Ravager on the next turn. When he attempted to Thoughtcast Mike Condescended. Murray played a second Blinkmoth and attacked with the first and the rest of his squad. Thicke Echoing Truthed a Ravager and Murray sacrificed it to put a counter on the Blinkmoth and one on the Ravager.

Mike's play was only an Ingot. Murray bashed in with everyone. Mike missed his fourth land drop and had to try to Mana Leak a Frogmite. Murray Mana Leaked back and attacked with everyone. Mike tried to Echoing Truth a Ravager but Murray pushed all his chips onto the Blinkmoth and Mike reached for his sideboard.

Mike opened with Serum Visions and Murray hired a Worker. Mike had a second cantrip for his next turn and Murray had another Worker. Thicke played and Ingot ad Murray took three--one from his City of Brass--to draw a pair of cards with Night's Whisper.

Thicke Pyroclasmed and played another Ingot. Murray had more Workers where those came from and played another. He tentatively put a Ravager out and Thicke allowed it to resolve. He had the Electrostatic Bolt and Murray responded by activating a Blinkmoth Nexus. He sacrificed his Worker and a Seat of the Synod and put four counters n his Nexus. Mike took five.

He shook his head and took another five--there was nothing in his deck he could do about it save Obliterate. It didn't come in time and he quickly found himself down two games to none.

Mike was tight on land for the third game and had to Serum Visions on his first two turns. Murray led off with Worker and it was Bolted when he played a Ravager on the next turn. Mike's third land was a Temple. Murray had a Frogmite and it powered up his Thoughtcast. He attacked for one. Magma Jet took out the Frogmite--Murray sacrificed it to Ravager…no scry. No land either for Mike.

Murray offered a Plating and when Thicke had Mana Leak he sprung a leak of his own. Murray attacked for two. Thicke found an Island and used Echoing Truth on the Ravager while Murray was tapped out. Ravager was met with Annul but Murray was content to activate Nexus and equip attacking for seven.

No land for Thicke. Thoughtcast and Night's Whisper swelled Murray's hand. He activated his Blinkmoth and made a free Myr Enforcer. He went to equip his land but Thicke had the Magma Jet..

Finally a land to turn on the Temple was on top of his deck and he Electrostatic Bolted the Enforcer. Night's Whisper. He played a Worker and Mike tried to Condescend but Murray had another Mana Leak. On the next turn he equipped the worker played a land and Ravager attack for lethal damage.

"Good luck," was all Mike could do in response. 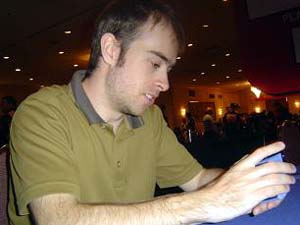 Final result: Murray Evans defeated Mike Thicke three games to zero and would advance to face the winner of JingPeng Zhang/David Rood.. Murray shook his hand and wished him luck in the loser's bracket, "I really hope you win the playoff. I would like you to be on the team."

Mike was torn about who he preferred to play. On one hand he had a better match-up against David Rood but on the other hand, "I would really like to see David Rood on the National Team."