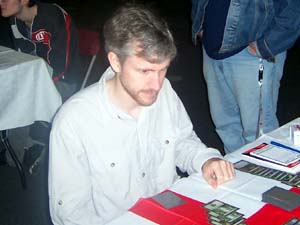 John is noted English deck builder and is running his own variant of mono green tooth. Dave is one of England's top players and has attended PTs and worlds before.
The game started slow with nothing for the first few turn as John assembled a set of Urza lands for turn 5 and Dave matched this with 2 Cloudposts. John resolves a Mindslaver and both plays went back to draw go. After Dave played out an Eternal Dragon and an Exalted Angel, he got slavered. Dave was then forced to cast another dragon counter it and Wing Shards both his own guys. John the follows up with a Darksteel Colossus which is able to finish the game before Dave can draw another Shards.

Dave boarded in 2 Stifle and Disrupting scepter, a card a number of English players are running for the expected control field while John just made a few minor changes.

Dave gets for to a relatively fast start with a turn 3 Scepter applying pressure on John straight away. John tried to play out Slavers before his hand was striped but Dave Stifled two in a row and even had a 3rd for an Oblivion Stone to deal with the Scepter. After removing John's hand of Duplicants and Tooth Dave was able to finish him off with ease. 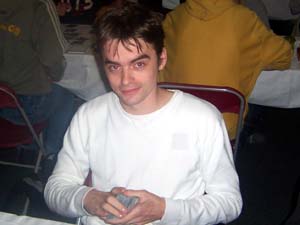 The third game started even slower with no plays until turn 6 when Dave cycled a Decree and then next turn discard stopped at 5 lands. John however has unable to assemble his land set and this limited his mana leaving him un-able to cast more spells around mana leak or make multiple threats. The game dragged on with another Decree making 2 putting John on a significant clock as he still failed to draw his land searchers. An oblivion stone only delayed the game and with an another Decree Dave finished the game.

This match favors the tooth deck however John's draws were too weak to let him play out his powerful spells.