Share Article
Share Tweet Share
is it. One more game to decide who goes home as champion of England. Despite being relatively unknown Paul Willis is no lummox. He's competed in two Pro Tours, made money in one and has had a lot of success on the country's PTQ circuit. His opponent is the formidable John Ormerod. Despite not putting as much time into the game in recent times John can still hold claim to the most accomplished English player with top 8 finishes on the Pro Tour and at both Worlds and the European championships.

Fifth Dawn was predicted to make a splash but sometimes the script doesn't get followed. No Ironworks decks in the top 8 for some reason (probably some idiot forgetting to make a second land in round 12 I guess) and this matchup sees Affinity (Willis) playing off against a supposedly dead archetype - Tooth and Nail.

Ormerod won the die roll and kicked off with a turn two Vine Trellis. Willis matched with a Welding Jar, Worker and then an Arcbound Ravager. Ormerod took his mana off into orbit on the third turn as he laid the second piece of the Urzatron, fetched the third and dropped a Talisman. And the Vine Trellis was still untapped to defend.

Willis drew some cards off a Thoughtcast and summoned a second Worker before sending in his machines. Vine Trellis blocked a Worker and was eaten by the Ravager for its impertinence. The Ravager munched itself to make a Worker bigger on the following attack as Ormerod had made an Oblivion Stone. The Stone blew and the board was cleared of everything except a 5/5 Ravager (saved by a Welding Jar).

Ormerod took it out with a Duplicant and dropped a Darksteel Colossus onto the table. Who needs Tooth and Nail.

Willis had recovered with Disciple, Frogmite and Skulllclamp's replacement - Cranial Plating. With a Nexus for evasion Willis looked equally as threatening.

Ormerod attacked and fetched a Stalking Stones out with a Sylvan Scrying to hold the fort. A Shrapnel Blast upset the maths and Willis was able to end the game when the Nexus and Disciple slipped through.

Ormerod started out with a turn two Talisman while Willis' deck did what Affinity does and dropped a 4/4 monster on the table. Ormerod followed his deck's plan and used Reap and Sow to fetch the final piece of the Urzatron lands.

Willis bashed with the Enforcer and followed up with a Ravager. In his turn Ormerod used the freshly active Urzatron to bust out a Mindslaver and sac' it to take control of Willis' next turn. The Ravager ate itself as a defence and on his stolen turn Willis revealed a hand of two land and then drew a third to make the Mindslaver look less than devastating.

Ormerod didn't have much better to do than waste two Welding Jars and then use an Oxidize to kill the Enforcer.

'Do I have any responses?' Willis asked, bringing some laughter from the audience.

Ormerod was looking in control this game although his deck hadn't found any truly massive threats. He started hitting with a Triskelion and Stalking Stones.

Willis dug like crazy with a couple of Thoughtcast and now all of a sudden Ormerod's assault was brought to a halt in the face of a Frogmite and Arcbound Worker packing a natty piece of Cranial Plating each.

Willis sent them in and the Triskelion lost a couple of arms to assassinate a Worker and force Willis to expend a Welding Jar. A Frogmite replaced the lost Worker and Ormerod was reeling on the back foot against a 10/2 and 11/3 Frogmite.

'This is definitely a good time in the game to cast Tooth and Nail with entwine,' Ormerod said, finally drawing a substantial threat.

Ormerod was facing down a 20/2 Frogmite and decided to match that with two indestructible 11/11 monsters. Unfortunately, Willis' Frogmite's toughness didn't match it's power and the two Colossi trampled it into the floor on the way to finishing Willis off.

No monsters for Willis at the start of the second, but that wasn't too much of an issue as he had Blinkmoth Nexus and Cranial Plating. It had worked in the Quarters but wasn't about to work here as Ormerod picked it off with an Oxidize.

Willis followed up with a Myr Enforcer and watched on as Ormerod hit the magic nine mana on his fourth turn with a set of Urza's lands, forest and Talisman. No Tooth and Nail though, just a Viridian Shaman that couldn't do much more than eat a Welding Jar.

The Enforcer picked up two pieces of Cranial Plating to make it something ridiculous/4. A Mindslaver showed up for Ormerod, but as Willis had nothing but land in hand and a land on the table. At least the Enforcer 'forgot' to attack this turn.

The match theme of ludicrously massive monsters continued as Ormerod bust out an 11/11 Colossus. Unfortunately for Willis the Enforcer didn't have trample and it also wasn't indestructible. An Oblivion Stone blew up the world and the Colossus loomed out of the ashes to put Ormerod one game away from being national champion.

Willis mulliganed and then accelerated out of the blocks with a Welding Jar and Arcbound Worker. Thoughtcast dug for more fuel and a Frogmite hopped onto the table.

A Cranial Plating forced Ormerod to use an Oxidize on it to slow down the damage. He drew his next card and then thought for a while. He fetched the missing piece of the Urzatron with Sylvan Scrying and laid it.

Willis emptied his hand to add a Disciple and Enforcer to the board. Ormerod hit the magical 9 mana on turn 4, but didn't have anything better to do except oxidize an Enforcer. Willis replaced it with a freshly summoned Somber Hoverguard.

Ormerod blew up a Frogmite with a Shaman and gave himself a blocker. Not really enough though as the Disciple and Hoverguard finished him off.

The match was going all the way to the fifth and deciding game.

'Ugh, what do you do with this,' Ormerod said, showing the crowd before hastily throwing back a hand that included 5 basic forests.

Willis also mulliganed, only the fourth time this match.

With all the shuffling out of the way the last game of the English Nationals began. Ormerod made a Talisman on turn two but was facing another quick start from Willis as a Worker was followed out by Cranial Plating.

Ormerod laid part two of the Urza land set and then dug out part three with a Reap and Sow.

Facing a monstrous amount of mana on his opponent's side of the board Willis cast Thoughtcast and then bashed for 5 with a plated up Worker. He added a Disciple.

'Haven't got enough mana,' Ormerod said, fetching a second Urza's Tower with Sylvan Scrying and then both casting and activating a Mindslaver. 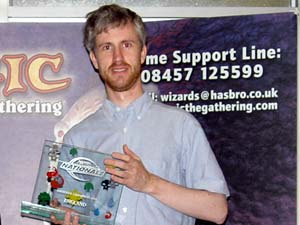 Ormerod took control of Willis' next turn and it was horrific to see. I'm not quite sure how I can describe exactly what that Mindslaver did to Willis without straying into the realms of the vulgar and profane. At the end of it Willis had no land, a Shrapnel Blast in hand and two Disciple on the table.

An Oblivion Stone got rid of those and then Ormerod sealed the match a couple of turns later with an entwined Tooth and Nail to fetch two Colossi.