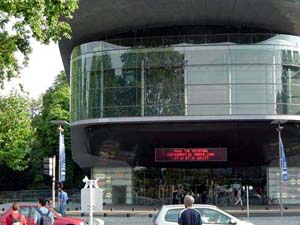 The city of Tours, around 200 kilometres from Paris plays host to this years French Nationals. It is held in the Vinci congress centre, the same venue that saw Alex Shvartsman triumph in a Grand Prix many years ago. The highest finishing Frenchman that day was Franck Canu in 4th, it is likely that a French player will win this weekend. But not certain ! That itinerant Argentinian, Jose Barbero has managed to secure an invite to play in this Nationals by virtue of having lived in Paris for the past fifteen months or so.

Last year in the Alpine town of Chambery, relative unknown Stephane Damizet defeated Farid Meraghni in a tense battle to become French National Champion 2003. All of today's 200 or so players will be attempting to wrest his crown from him. Among the favorites to take it must be Gabriel Nassif, although he is concentrating more on the PT Player of the Year award. Others with a PT top eight this year such as Nicholas Labarre, Yann Hamon, Alexandre Peset, and both Olivier and Antoine Ruel must figure to have a strong chance.

The format is three rounds of Standard followed by two three-round pods of Booster Draft using the Mirrodin block, and then a final three rounds of Standard. After this the players are cut to a top eight who'll play single elimination to decide a champ. French Nationals is the first event where the competitors will have had a chance to practice the Mirrodin-Darksteel-Fifth Dawn format on Magic Online. Let's see if this raises the standard, there was some 'nice' drafting last year.

The players are starting to stream through the doors : keep checking back over the weekend for Feature Match coverage, interviews, decklists, and all-around buffoonery as we see who will be French National Champion 2004 !