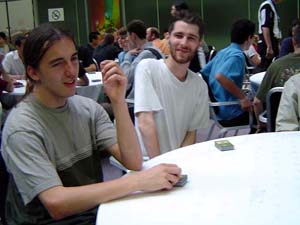 all the pods containing 3-0 players, Olivier's was by far the hardest. It contained, Yann Hamon, Pierre Baussaron, Olivier Ruel, and Benjamin Caumes as players with significant Pro Tour experience, and two of the other players had been to at least one Pro Tour. Olivier was being passed to by one of the amateurs, and passing to Ben Caumes. Before the draft Olivier was fairly scathing of the standard of Limited Magic in France.

" The first draft pod is usually easier than a 4-3-2-2 " he said, referring to a notoriously easy tournament on Magic Online. " Outside of Paris most of the players don't get to draft at all "

His opening pack contained an easy first pick in Spikeshot Goblin, other notable cards being Deconstruct and a Talisman. Off-color Talismans and Myrs have become even more important now that you only get one pack to grab them, and also with the addition of the Sunburst mechanic in Fifth Dawn making them more useful than ever. Regardless, Spikeshot was still clearly the best card . Soubrier, to his right, had first-picked a Megatog out of a fairly strong pack which would almost certainly lead to problems later on.

The pack was still strong, Olivier taking an Electrostatic Bolt. Olivier's third pack contained that rarest of Mirrodin cards, a Krark-clan Stoker. Once this was exchanged for a card legitinately found in the set, Ruel had a tough choice between Krark-clan Grunt, Fatespinner, and Taj-Nar Swordsmith. In the end he decided to make a second color choice and took the white card. Pack four was again strong, with a Gold Myr, Viridian Shaman, Viridian Longdow and a couple of other notable cards. He took the Longbow.

Unfortunately this was where the quality dried up. In fact he didn't get any cards that you would be happy playing in your deck after this point, a Soul Nova and a Goblin War Wagon being the best of a bad lot. In fairness the packs were very weak and the players around him also had miserable-looking decks.

Pack one of Darksteel featured some classy buffoonery from Olivier. He opened another weak pack with Thunderstaff as the best card and Pteron Ghost a distant second. He counted the pack - it was sixteen cards. A judge came along and randomly took the Thunderstaff, so Olivier was stuck with the Ghost. He then laid out his booster to pass it and there were only thirteen cards so he had miscounted initially. Unfortunately instead of the Thunderstaff the judge gave him back a different random card - Magnetic Flux !

At least his subsequent picks were better, a Leonin Battlemage (there was also a Purge and a Razor Golem in this pack), then Unforge, Darksteel Ingot, Razor Golem and Loxodon Mystic. He picked up another couple of playables such as Darksteel Gargoyle in the late picks in this set. It was noticeable that the packs were fairly shallow, most of his picks were clearcut due to the absence of any other good cards in his colors. Going into Fifth Dawn he was just two colours with only an Ingot to produce any other colour. This meant he would miss out on some of the Sunburst highlights of the set.

His pack-opening hadn't improved and he got the broken Wayfarer's Bauble as his first pick. Second was a far superior card, Magma Giant, and then Healer's Headdress and Lokodon Anchorite. An Auriok Windwalker came along surprisingly late. Sadly a lot of Skyreach Mantas, Suntouched Myrs, Clearwater Goblets and the like had to be passed as he couldn't legitimately support them.

For those of you who like 'amusing' picks, let me just remark that the gentleman took a Goblin War Wagon over Viridian Longbow at one stage. While Hill Giants are all very well, some might say this was a bad choice

His deck was pure two-colours and certainly not spectacular, but not disastrous either. It looked to me like a solid 2-1 deck. With a significant amount of quality players in his pod, Olivier wouldn't be too unhappy if he manages that 2-1 : Let's see what happens.