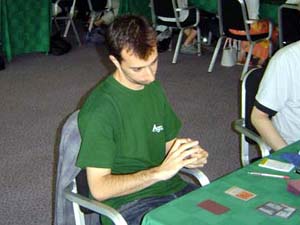 the well-known players managed to avoid getting paired against each other in the large field at the start of day one, the first feature match contains France's most succesful current player, Gabriel Nassif, who is currently second in the Player of the Year race to Norway's Nicolai Herzog. In stark contrast, Olivier, playing in his first Nationals, has only played in one event where he could have picked up Pro Tour Points, but didn't make day two in Grand Prix Lyons.

Olivier is playing a blue-white control deck, and Nassif has a mono-red land destruction deck which Jose Barbero is also playing.

Nassif started out with a turn two Blastminer, and a turn three Molten Rain which was Mana Leaked. With no non-basic lands on Olivier's side Gab wass forced to swing for one. Marmet didn't play a third land , and set off his Wayfarer's Bauble. Nassif Demolished his Island and attacked again.

Marmet found a land and another bauble but still only had three in play as Gab continued to blow them up. In contrast Gabriel had seven lands allowing him to activate a Stalking Stones, and then a second, creating a quick clock. A Wing Shards from Olivier only killed the irrelevant Blastminer, and after Nassif had Stone Rained him down to two lands, they moved on to Game 2.

Olivier brought in COP : Red and Sacred Ground, and Gabriel sided in Culling Scales to deal with them, as well as Flashfires

Olivier made the spectacular decision to go second in Game 2. Nassif played a morph on turn three (a Blastminer), and started to attack. Marmet tapped out on turn five to play a Circle of Protection : Red, and a face-down ExaltedAngel. Tapping out was an opportunity for Nassif to play his Flashfires, which reduced the rookie to three islands as his only mana-sources. He played a Culling Scales which was sure to kill the Angel before it could be unmorphed. 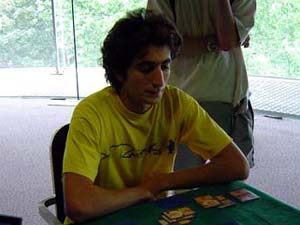 When a Stalking Stones joined the attack, Olivier needed to find an answer quickly, but he was unable to draw any more white mana after the Flashfires. Nassif made sure of the match with an Arc Slogger.

3 Decree of Justice 3 Wrath of God