the field at 9-1 after defeating Alexandre Peset last round, Damien needs only a draw to make sure of top eight. Steven was two points back at 8-1-1, needing a win in either of his last two rounds. Damien is playing Big Red, and Steven is playing Affinity

Steven took a mulligan but was happy with his six card hand. Damien played a Guardian Idol on his second turn and Molten Rained a Seat of the Synod on his third. Steven's draw was pretty good, he made a Worker on turn 1, a Ravager on turn 2, and a Plating on turn 3 although he couldn't equip due to the land destruction.

Reabourg dropped an Arc Slogger but it wasn't enough. Steven untapped, played a Disciple and an Ornithopter, equipped the plating to his Arcbound Worker and attacked with it and the Ravager. Damien was on 16 and Steven had exactly 16 points of damage in play if he sacrificed everything to his Ravager. He spent a good five minutes counting and recounting the damage. He had a 2/2 Ravager, 6 other artifacts of which one was a Worker. This would make the Ravager 9/9. Seven artifacts in total sacced to the Disciple would make 16. Eventually Steven came to the first conclusion, and Damien scooped in reply to the first sacrifice.

This time Steven had a first-turn Disciple and second turn Ravager and Ornithopter. Damien again had a Guardian Idol. He missed a third land drop which meant that he could only cast a Molten Rain, rather than an Electrostatic Bolt as well. Steven didnt have another land either so he just attacked with the Disciple and the Ravager.

Damien drew a Chrome Mox, and said go. Gouin drew another non-land and attacked with his Disciple and Ravager into an active Guardian Idol ! The Idol blocked and killed the Ravager, Reaubourg Bolted the Disciple, untapped and Demolished Steven's remaining land.

Gouin missed another land drop and Damien played an Arc Slogger. On to game 3. 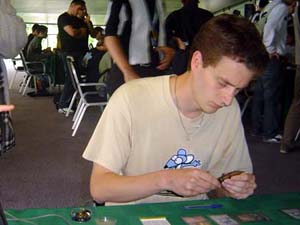 Steven had to mulligan an opening hand with five lands,a Worker and a Mana Leak. His second hand was just as bad and he sent that back too. He eventually kept a hand with one Great Furnace as it's only mana source. He drew a second on his third turn. Damien Magma Jetted it and Bolted a second.

Reaubourg dropped a Simulacrum, and then Pyroclasmed when Steven played a third Ravager and an Ornithopter. Steven used the Ravager to pump up his Ornithopter, but that was Detonated. Reaubourg played a Rorix and attacked. Steven took a hit and then Shrapnel Blasted it away. This left him with two lands and a Disciple as his only permanents. Damien played an Arc Slogger, untapped and used it, a Magma Jet, and a Pulse of the Forge to burn Steven out.

3 Night's Whisper 4 Disciple of the Vault