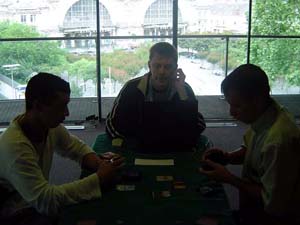 into the round, Farid is on 7-1 and Mathias is two points back at 6-1-1. Although not well-known outside France Mathias has been to a handful of Pro Tours with his best finish being 35th.

Both players had a first turn Arcbound Worker. Farid played a second turn Myr Moonvessel, Mathias had a rather better turn, playing a Viridian Longbow and an Auriok Glaivemaster. Farid saved the Moonvessel with a Ferocious Charge to dig through his deck.

He obviously didn't find anything as he disgustedly scooped on his fourth turn, throwing down a hand of two Viridian Acolytes, an Electrostatic Bolt which he had no Mountain to cast, and a Tangle Golem.

Veron wasted no time in fetching his Viridian Longbow with Steelshaper's Gift on turn one. He cast a Raise the Alarm on turn 2 while Farid did nothing until a turn 4 Tangle Golem. Veron gave it a Stasis Cocoon and made a Denguard as well.

Farid explained why he was playing Myr Moonvessels and so on when he played Skullclamp. He equipped it and then Shattered his own Golem to draw some cards. This gave him a Turn to Dust for the Longbow. He dropped a Trinket Mage, fetched the mighty Moonvessel, and Clamped it away. The Raise tokens and a Denguard had dropped him to eleven in the meantime, so he had to do something.

Veron played a Loxodon Mystic and passed the turn. Farid drew a bunch of cards with an Acolyte and a Worker dying to the Clamp, but didn't actually improve his board position. The next attack dropped him to eight. Mathias played a Glaivemaster and a Fleshgrafter. Farid used Echoing Truth on the Mystic to buy him some time and dropped a Tel-Jilad Archer, Veron didn't attack and just replayed the Mystic.

Meraghni untapped and played Memnarch. Veron no longer had any sensible attacks so he just dropped a Taj-Nar Swordsmith. He didn't fetch any equipment as Farid could just steal it with Memnarch. Meraghni only had two Islands in play, but he used Pentad Prism to produce another and steal Veron's Mystic with Memnarch. Mathias thought for a while and scooped.

These two obviously had a lot of one drops as once again they each had one. Mathias made a Glaivemaster and Farid an Arcbound Worker. Veron gave the Glaivemaster a Cranial Plating and attacked, Meraghni had Turn to Dust in hand but no Forest.

He didnt find one immediately so Veron got a hit in and played Battered Golem. Farid's next draw step yielded a Forest which let him Turn the Plating to Dust and then Viridian Shaman the Golem. The game was played at a frantic pace. Veron's Specter's Shorud was Echoing Ruined and Farid began to attack with Worker, Shaman, and a Goblin Archaeologist.

Veron dropped a War Wagon to stabilize the ground but Farid drew a Trinket Mage and fetched his Skullclamp. He put it on the Archaelogist before trying to destroy the Wagon with it. He failed to, but drew two cards for his efforts. Mathias played a Longbow and shot the Worker with it.

Farid cycled through an Acolyte with Clamp, then equipped it to his Shaman and attacked for 3, Shattered the Longbow and moved the clamp to the Trinket Mage. The card advantage for Farid was immense, but he was only on eight. Veron Terrored the Mage and attacked with War Wagon and Glaivemaster to knock Farid to 4. Farid attacked back with the Shaman to put Mathias on 6 and played a Tel-Jilad Outrider and a Tangle Golem. Veron had nothing left and conceded after trading his two remaining creatures for a Clamped Tangle Golem.