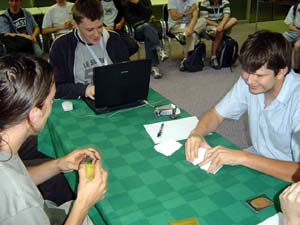 has an interesting deck, which was also played by a few others. Bastien Perez lost in a feature match to Thomas Shaw with this crazy red-green deck featuring a generous selcection of morphs. Olivier is playing a much more standard Goblin-Bidding deck. Despite the hype given to Tooth and Nail, all eight of the deck is the top eight contain at least some red cards. Tooth and Nails demise can perhaps be attributed to the number of Blastminers in sideboard's (and Nassif's main-deck)

Svlvain went first, Olivier played a Skirk Prospector and a Piledrvier that fell to a Magma Jet. Lauriol dropped a " mysterious morph ", and Olivier just played another Piledriver. Lauriol also did nothing. Olivier played a Clickslither and his Piledriver was Bolted in response. Unsure of what the face-down guy was he elected to pass the turn. Sylvain attacked and unmorphed his Blistering Firecat. At the end of turn he cast a Caller of the Claw and got a Bear token as well.

Olivier attacked to make the lifetotals 15-11 in Sylvain's favor, and played a second Clickslither. Lauriol made a Viridian Shaman and then attacked for one with a Blinkmoth Nexus, holding the rest of his team back. Olivier attacked with one Clickslither, played a Warchief and another Prospector, then said go. Sylvain's army of Gray Ogres was looking rather insufficient, but all he had was another Shaman. Ruel played a Siege-Gang Commander, and attacked for the first game.

Sylvain used Magma Jet to kill a Sparksmith, and another for a Goblin Shaprshooter. He summoned a Slith Firewalker which got only one hit in before being Bolted. Sylvain did nothing, Ruel played a Clickslither and attacked with both. Caller of the Claw ambushed his Sparksmith, letting Lauriol play a Sharpshooter.

Lauriol had nothing in hand so he could no longer attack, and neither could Olivier. Sylvain drew nothing but land over the following turns, and Ruel waited until he had three goblins in hand before casting them all and sacrificing them to the Clickslither for the win.