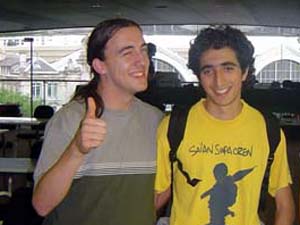 last match of French Nationals for this year is upon us, and it sees a clash between two of France's top PT players. Both are playing red, Gabriel has a land destruction deck, and Olivier is playing Goblin Bidding. Antoine Ruel asks from the spectators area whether either of them has won a tournament before. Surprisingly for all their high-profile finishes, neither of them has won a thing except for the French Team Cup, not even a pre-release.

Nassif sends back a hand with three Blastminers and a Shatter, not too useful in this matchup. Olivier starts out with a Sledder then a Piledriver. The Sledder is Bolted, but Ruel adds a Warchief and swings. The Warchief is also Bolted, and then Gabriel drops a morphed Blastminer. Ruel msummons another Warchief and attacks, this one trades for the Blastminer.

Olivier makes a couple of Skirk Prospectors and Nassif has a third Bolt for the Piledriver. The Prospectors are sacrificed to make a Siege-Gang Commander. Gabriel plays an Arc-Slogger. Olivier only has three lands in play so he raps on the top of his deck and it serves up a Mountain for his Clickslither. Gabriel blocks the Siege-Gang and drops to four. He untaps and doesn't draw anything helpful, but he isn't dead yet. He removes thirty cards to kill the three Goblin tokens, then another ten to trade his Arc-Slogger for the Clickslither which Olivier pumped with a freshly drawn Goblin. Ruel has nothing else but Gabriel has only 5 cards left in his library. He draws an Arc-Slogger immediately, but Olivier draws a Piledriver then a Sharpshooter to end the game as Nassif can no longer attack with the Slogger.

Gabriel destroys three of Olivier's lands, while taking hits from a Goblin Piledriver. On turn six he plays a Culling Scales, and Gabriel uses Pulse of the Forge to drop Olivier to 14. Olivier plays a Warchief and attacks for five. The Piledriver dies and is replaced by a Sharpshooter. Nassif is down to nine. Olivier drops a Clickslither and attacks. He calculates that he can't shoot Gabriel and sacrifice the Sharpshooter. This would put Gabriel on three and with seven mana in play he can double Pulse Ruel to 6, burn once to 2 in his end step, then untap, burn for another one to put himself at one and double Pulse Ruel out.

Therefore, Olivier does not sacrifice the Goblin to the Clickslither - Gabriel goes to six. All he can do is kill the Sharpshooter with the Scales and activate his Stalking Stones. Olivier untaps Shatters the Stones, and plays a Sparksmith. This lets the Clickslither through for the final five damage to give Olivier the title