not our dad", Alana 'platy' Burman said as she pointed to Eric "Danger" Taylor. So THAT'S where they got the name. EDT doesn't quite look old enough to have sired her and Chris McDaniel (otherwise known on the 'net as the Star Wars Kid), but perhaps it's the sequined shirt. 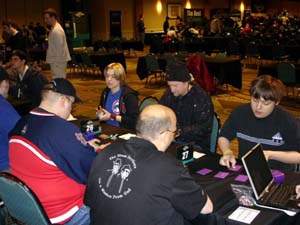 He's Not Our Dad, far, vs. Old School

At least one of the members of Old School, on the other hand, might have been able to. The three mustachioed (and goateed) gentleman from St. Louis are on their first Day 2 of a GP, though they've all been playing for at least eight years. In this round, John Parks' flyer-heavy Red/White deck would face Burman's somewhat shaky but creature-heavy Green/White, while Jason Bush and edt had the aggressive Black mirror (each player also had a single Devouring Greed), Taylor coupling it with Red and Bush with Blue.

On the other hand, young McDaniel from Richmond, Virginia, is already a veteran of a number of events, including a 9th place finish at GP: New Jersey and a .500 record at Pro Tour-- Columbus. And yes, Waymon, his opponent, at 46, actually is old enough to be his dad. It's age vs. youth! Experience vs. intuition! Something vs. something else!

SWK's defensive U/R deck featured a lot of splice spells including Glacial Ray and Consuming Vortex. He also mised the ridiculous Meloku and Earthshaker, sometimes questionable in certain matchups but a virtual bomb against Waymon's army of 2/2s. Waymon's nearly mono-Green (with a small splash for Blue) was not without threats of his own, however, as a Gale Force along with a number of untargetable Budoka and a coupla fat Moss Kami could prove quite deadly against the more defensive deck.

Game 1 began apprehensively, with Waymon on the play having nothing but a turn 4 Order of the Sacred (a.k.a. Taco) Bell. SWK meanwhile opened with a turn 2 Floating-Dream Zubera and a turn 3 Soratami Rainshaper (one of the four Rainshapers among the pair).

McDaniel swung, baiting the Order with his Zubera. Waymon refused the bait, so instead McDaniel bounced it with Eye of Nowhere splicing Ray to the dome. Waymon could do nothing but replay his Order and pass the turn.

McDaniel once again attacked for three and played a Brothers Yamazuki, declining to trade it with the Order when Waymon attacked, instead trading it and the Ray for Waymon's turn 6 Moss Kami. Stuck at four lands, Chris could do little else.

The next few turns found Larry gaining an edge with a Rootrunner and a devastating Gale Force, which blew away McDaniel's pair of 2/1s. McDaniel desperately tried to stem the flow of damage with a Soul of Magma, but Waymon's relatively large beasties eventually forced him to concede.

Chris looked a little frustrated after game 1, perhaps not expecting the depth of Larry's Green creatures. Hopefully his card advantagelicious Arcane spells could stem the flow of damage while his bombs do the rest.

Game 2 was all McDaniel, as his quick Rainshaper started whittling away at Larry's life total while a Hinder slowed down Waymon's already dismal turn 4 Orochi Sustainer. McDaniel laid down an Earthshaker, Sire of the Storm and Soul of Magma in quick succession, and even though Waymon managed to trade a Moss Kami for the 'Shaker, the eventual card advantage gained through the Sire made winning an inevitability. Waymon stalled with his Orochi Hatchery set to three, but when the Gale Force refused to come he despondently went to game 3.

With 20 minutes left in the round, theirs would be the rubber match, as Taylor already defeated Bush 2-1 and Parks trumped Burman 2-1. "Earthshaker is brutal against my deck," said Waymon. He would need a fast draw to triumph over McDaniel's deck's inevitability in the long run.

Waymon, on the play, was forced to mulligan into a turn 2 Budoka but little else. McDaniel put on the pressure with a turn 3 Rainshaper and (finally) turn 5 Meloku while Waymon was still stuck on two Islands and a Forest. A turn 6 Burr Grafter wasn't exactly what he wanted, and his next turn Venerable Kumo was bounced end of turn by McDaniel with a spliced Vortex onto Reach Through Mists. McDaniel did little else but swing with his fliers and pass the turn, so Larry's next turn Gale Force was weaker than it should have been, as SWK hardcast the Vortex and saved the powerful legend(ary creature).

With Meloku now unremovable by Waymon, SWK could merely keep her back and create some blockers until he had enough mana to make seven tokens and swing with all his fliers for the win.