Share Article
Share Tweet Share
back to the second Draft at table 1 of GP Paris! Giuseppe Reale drafted a Green/White deck in pod 1 in the first draft and used it to sweep his three opponents while dodging the two Black decks sporting several Nezumi Cutthroats. Right now he is almost guaranteed to be in the top 8 as he only needs to draw one of the remaining three rounds. Trailing him are three players with 11-1 records: Raphael Levy, Marcio Carvalho and Bastien Perez. The other four remaining players - Arnost Zidek, Davide Fenu, Julien Goron and Yoan Malmont - are sitting at 10-1-1. The cut for top 8 is either going to be 13-2 or 12-2-1 with good tiebreakers. That means those eight players are all in a really good position to make it, but at least two of them, probably even three or four, are going to fall behind. 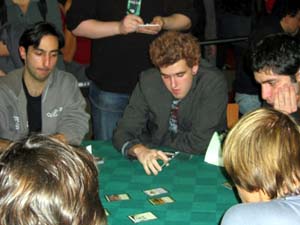 The seating for the draft was the following:

Giuseppe opened the first pack and chose a Rend Flesh over a Mystic Restraint that went second pick to Marcio. Levy opened the draft in the same way he did in draft 1, with a Hundred-Talon Kami, which was the only white card and he figured that he might be able to get a good position for the color once again. The Red and Green deceivers went next to Bastien and Davide while Julien took a Villainous Ogre. A Kami of the Palace Fields went to Arnost and Yoan wheeled a Green and a Red card.

But the next pack already spelled trouble. Marcio opened a Black dragon and while Levy was hoping that he would pass it because Giuseppe's first pick was a Black card, he obviously went for it. Raphael took a Blue card and Bastien happily scooped up a Nezumi Cutthroat while a Strength of Cedars went 4th pick to Davide. But Giuseppe and Marcio were not the only ones who were having problems settling into their colors. Arnost took a Kodamas Might out of Marcio's pack although Yoan had indicated that he wanted to be Green. Malmont did not seem very impressed either and just took two green cards out of the pack with Arnost's Kodama's Might. Arnost did not really seem to bother with what his neighbors were drafting anyway as he wound up with a few Black cards soon after while Julien sitting on his right had a Black first pick.

Yoan stayed in Green anyway but Giuseppe apparently understands the concepts of Rochester Draft a bit better than his neighbors and left Black to avoid a fight with Marcio, who would not let his dragon go anyway. His only problem was that his neighbors were Green/Red and Green/Black while he was White and looking for another color. Blue was not a good option as there were two heavy Blue drafters already and the color does not support a third most of the time, and he also never saw any good Blue cards. In the second set of packs both players on his left were not drafting Red cards and Reale went into that color although he did start a fight with Yoan once again. That put Yoan in the same position Arnost was in already: He had drafted one of the colors of both of his neighbors, something you should really avoid in a Rochester Draft. Fighting with one guy is okay and a lot of the times just unavoidable but sharing colors with both guys sitting next to you is a really bad idea.

Things worked out for Arnost anyway. He ended up with really solid Green and Black cards. His deck does not have any real bombs, but it seems good enough to give him the 2-1 record he needs. Yoan was not that lucky. His deck is a bit worse than average and I doubt that it will give him the two needed victories. Giuseppe's deck is not that good either, but he does have a few Red removal spells and Nagao, Bound by Honor. And he only needs a single draw anyway so I am fairly sure that he will end up in the top 8, although it happened before that a player with a perfect record going into the last draft did not make top 8. You can contact Frank Karsten if you want any more information on that subject.

But Marcio, Raphael and Bastien all have really good chances. They do not only have two more points than the other four, their decks also seem a bit better than the others. Marcio ended up with several Orochi Sustainers, two Sosuke, Son of Seishiro, Kokusho, the Evening Star and a Time of Need to fetch one of the Sosukes or his dragon when needed along with some really good creatures. He does not have all that much removal, but his deck should be strong enough to win one of the first two rounds and then intentional draw into the top 8.

Raphael has a nice Blue/White deck once again. This time he is a bit short on cards and has to run a few fillers but he ended up with two Nagao, Bound by Honor, which means that his deck is good anyway. 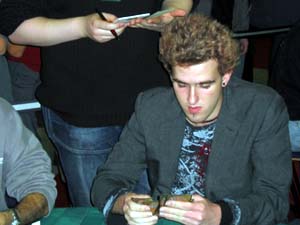 Bastien drafted a good Black/Red deck that runs two Gutwrencher Oni and a Painwracker Oni. Late in pack 3 he had the choice of Ronin Houndmaster and Bloodthirsty Ogre and for some reason he chose to go with the Red creature. Two of his three possible first round opponents are Marcio and Raphael who both have almost no removal at all and can not beat the combo of demon and Bloodthirsty Ogre while the houndmaster is a good card but it does not win games on its own. Still, the three Onis are accompanied by two Nezumi Cutthroats, an Earthshaker, a Nezumi Graverobber, a Devouring Greed and some removal spells. That should be good enough for the single needed win as well.

The remaining players are a bit in trouble as their decks are either worse or just as good as the ones I already mentioned but they need to win two of their rounds. Davide chose to go Blue/Green behind Bastien and has two Strength of Cedars, which is powerful in a deck with several flying creatures. But the two Strengths are the only highlights in his deck and the rest are just creatures. Not bad ones but they are not exciting. Julien is pretty much in the same position. He drafted a Black/White deck that is definitely okay, but other than a single copy of Devouring Greed and two or three removal spells, he does not have any outstanding cards as his first picks were rather weak.

Finally Yoan's deck seems the product of a fight with both Arnost and Giuseppe. He had to draft a few Blue cards late in pack 3 which he is probably going to splash but he is the player at the table that I would be the most surprised to see in the top 8.