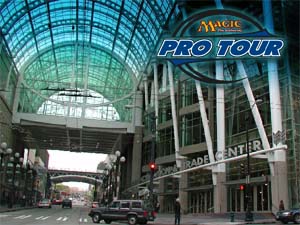 Pro Tour Seattle is underway! The clicking sound of one hundred and seven three-person teams sorting their card pools filled the Washington State Convention Center shortly after nine this morning. We will hear that sound two more times before the day is over. Teams will play two rounds of Team Sealed with their current pool of cards and then get a new set for the next two rounds. They will close out with a third set for the final two rounds of the day. They will be working with two Mirrodin tournament packs, two Darksteel Boosters, and two Fifth Dawn boosters each time.

Teams need to end the day with at least twelve points-or four match wins-to advance to the team Rochester portion of the event. Team Rochester has often been called the most skill testing format on the Pro Tour. You only need to look to the domination of Phoenix Foundation (Kai Budde, Dirk Baberowski, and Marco Blume) to see that. One of the format's best players joins the coverage team this weekend. Look for insightful deck building and Rochester Draft coverage from Potato Nation frontman, Mike Turian.

There are plenty of Magic's biggest names in attendance today including several blasts from the past. Representing the here and now are the reigning format champions, The Brockerfellers (Brock Parker, William Jensen, and Matt Linde), the always the bridesmaids Illuminati (Alex Shvartsman, Justin Gary, and Zvi Mowshowitz), and the aforementioned powerhouse Phoenix Foundation. Just stepping out of their time machines are AlphaBetaUnlimited.com (Ryan Fuller, Chris Benafel, and Noah Boeken) and The Max Fischer Players (Chris Pikula, Igor Frayman, and Josh Ravitz).

And that's just the tip of the iceberg. Stay tuned all weekend for the emerging stories, deck building, feature matches, and the triumphant return of the Coverage Blog!