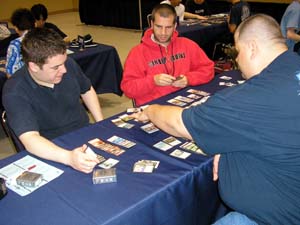 I sat down with Phoenix Foundation, the first thing I noticed was how excited Marco Blume was. While Kai Budde and Dirk Baberowski sat calmly on the other side of the table, Marco seemed like a kid in a candy store as he waited to open the Sealed Decks.

Blume took the Green and White cards as Phoenix Foundation began the deck-building process. Budde was working with the black and red cards while Baberowski had the leftovers. He seemed fine with this and worked with the blue cards while tossing in random colors of spells.

As the unplayables were being tossed aside left and right, Budde let out an "Oh!" when he came across Leonin Battlemage. In the middle of the table sat a bunch of equipment cards and artifacts left unclaimed from the grabbing of colors. A Razormane Masticore was the best of the cards left. None of the decks had developed far enough along to decide where the newest Masticore belonged. Right next to Razormane Masticore was an Iron Myr. Baberowski already had plenty of mana acceleration with an Vedalken Engineer, Pentad Prism, and a plethora of other Myrs so he wasn't interested in the Iron Myr.

Blume was fiddling with the green and white cards. Blume professed his love of the Skyhunter Prowler: "He looks so bad but yet he is so good." Two Prowlers joined the Leonin Battlemage, Leonin Den-Guard, Razor Golem, and an Arrest for the white portion of Blume's deck. Green added a lot of artifact removal with Deconstruct, Viridian Shaman, Tel-Jilad Justice and Creeping Mold. Of course there were a number of Protection from Artifact creatures as well (Tel-Jilad Outrider, two Tel-Jilad Chosen and a Tel-Jilad Archers). Blume struggled balancing the two different sets of creatures. His white creatures all wanted to be equipped while his green creatures couldn't be.

The chatter in German between Blume and Budde was non-stop. They would bounce ideas off of one another trying to figure out the different cards to place into the decks. I would have to wait until they were done building to ask Budde if they even considered trying different color combinations than RB, GW and 5cU. He replied that they did but they couldn't figure out another way to place the colors. He felt that placing red and green together placed too much artifact destruction into one deck, while placing green with black left that deck too creature-light. He would never put black and white together in MD5 so that limited their options further. They considered all of these options without even moving the cards around at all. Their first instincts were the builds that they would end up with.

Baberowski wasn't as vocal during the deck-building process. He took his blue cards and started to figure out what to do with his deck. The Clockwork Dragon was a natural fit with all of the mana acceleration his deck contained. Trinket Mage could fetch up one of five different artifact lands, Leonin Bola or Conjurer's Bauble. A five-color theme quickly emerged for his deck. With Thought Courier able to access more cards and the Pentad Prism and Vedalken Engineer to help fix his mana playing five colors was easily accomplished.

With only ten minutes gone out of the hour available, Phoenix Foundation moved onto the fine-tuning process. Budde realized that he wouldn't be able to effectively use the Shrapnel Blast and asked Baberowski if he wanted to use it. While Baberowski responded in German he let out a laugh, which indicated that he was very pleased to be receiving such a boost for his deck.

The lack of artifact removal in both Budde's and Baberowski's decks worried the team. Budde did have a Dismantle and two Rustmouth Ogres to control artifacts but Baberowski didn't have a single card that would. Blume offered to give Baberowski a Tel-Jilad Justice to help the situation. Blume appeared to have too many cards in any case and felt that the Justice was needed in Baberowski's deck. As the number of cheap instants in Baberowski's deck grew I was surprised that the Scepter never made it in. Phoenix Foundation didn't feel as if they could afford to have the black deck give up Terror in order to make Isochron Scepter good enough in Baberowski's deck.

Budde and Baberowski were tossing the mana Myr around as if they were on a merry-go-round. First, Budde switched an Iron Myr for a Talisman of Impulse then when the Tel-Jilad Justice returned to Baberowski the Talisman came with it. Of course Budde still wanted a Myr back, but now all of a sudden he had Leaden Myr instead. Baberowski needed Iron Myr to help cast his Shrapnel Blast. Baberowski then decided that he just had too many Myr and gave a Gold Myr to Blume.

Phoenix Foundation were efficient, to say the least. They had almost finished their decks and there was still more than 40 minutes left in deck building. With the time not being a pressure they struggled over more minor decisions. Making the proper choice on what the 23rd card will be can often make the difference between success and failure. For a short while Budde's deck had a Dross Scorpion, but eventually it would be cut for Dross Prowler. Although I couldn't say anything, I was really rooting for them to play the Dross Scorpion. He may not be the best creature but at least he is fun.

Even though Blume had taken the green white deck originally he now swapped it for Budde's red black deck. They felt that the A seat, Budde, would be more likely to play against black players than Blume in the B seat. Therefore, Phoenix Foundation would rather have the deck with two Terrors playing against a B seat player. 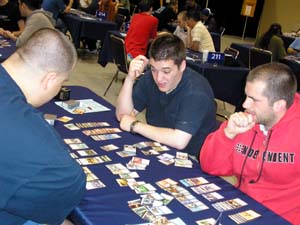 With the decks now being settled on Budde playing G/W, Blume with R/B, and Baberowski with Blue Affinity. the last thing the team worried about was how to balance their mana. Blume's deck looked like it would want to have double red on turn two for Slith Firewalker, and then lots of black mana for cards such as Consume Spirit and Barter in Blood. Baberowski had to manage five artifact lands, four colors of spells and Spire Golem. He ended up playing seven Islands, one Forest and two Swamps to go along with his artifact lands. He could only cast the Shrapnel Blast with Iron Myr or Pentad Prism. Of course, had Budde not double-checked Baberowski's registration list, Baberowski wouldn't have been playing with any artifact lands at all. Good teamwork isn't just about playing well.

Baberowski felt that overall their decks were pretty good; he liked the number of bombs and how well the decks ended up working out. Phoenix Foundation didn't find success when it came to playing out the matches, however. Despite a team consensus that Budde's decks were the worst, he won both of his matches. His 2-0 performance would have helped had his teammates won even a single match. Both Baberowski and Blume went 0-2, leaving Phoenix Foundation in the 0-2 bracket.