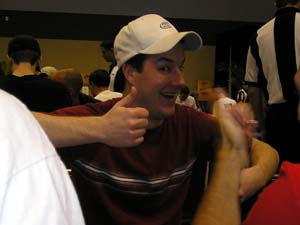 deck pools are easier to work with than others, but it's the most challenging ones that separate the top teams from the "almost" guys. Though it started out well for The American Way, by the time all the cards had been laid out it was clear these guys would have some work to do.

For those that may not be familiar with these guys, Craig Krempels recently won the whole thing in Kansas City to become the 2004 U.S. National Champion. Jonathan Sonne and Gerard Fabiano represent two-thirds of "Slay Pillage Gerard," the team that made top 4 at Boston '02 with Scott McCord.

As packs were ripped and cards were laid out, each of the players pointed out that green looked quite solid, and the presence of some great equipment along with a Crystal Shard meant that they'd have some options. The problem was that however they tried to split up the colors, one of the decks kept coming up too thin.

Fabiano, who was clearly in the leadership role during deckbuilding, asked teammate Sonne how the white looked.

"It's pretty shallow," Sonne responded. "It's going to need a lot of cards."

As they got more familiar with their card pool, other issues became clear. They had none of the typical white creatures that love equipment, the red was short on creature removal, and the white pool wasn't as deep as they would have liked. As Sonne put it, "Wow, the white just sucks."

From the start, Fabiano was working on a red/green build and though they brought up the idea of breaking that deck up to help the others, the red/green was the one deck that never swayed. Packed with solid green but a touch light on removal, Fabiano stressed that the key would be keeping a great curve.

Meanwhile, a blue/black artifact deck was shaping up in the hands of Krempels featuring Crystal Shard plus Chittering Rats, but in the current configuration they couldn't find anything to do with the white that looked solid enough for the third deck. Despite all the equipment they had to work with for the B/U and W/R (Lightning Greaves, Bonesplitter, Ensouled Scimitar, Fireshrieker, Morningstar, Cranial Plating), neither deck was coming out great. Cards could be balanced from one to the other, but either both decks looked mediocre or one of the decks was too weak.

Several color swaps were considered for the two problem decks and blue was paired with white more times than not, but as Krempels put it, "However we split these up, one of the decks keeps needing too many cards." The turning point seemed to come when they switched the white deck to W/R and moved the arcbound guys into it from the B/U deck, moving some other cards back into the B/U to compensate. For the first time, they had three decks with enough playable cards.

Fabiano first surveyed the G/R: "This one's fine, there's enough to work with. Is the W/R good?" Sonne answered simply "I don't know."

Other color swaps were considered but nothing impressed them enough to dump the G/R, B/U, and W/R strategy. As more time passed, their attention increasingly turned toward specific cards for each deck rather than what colors to pair, and once the 30-minute mark passed they all agreed this was the way to go. Reasonable decks in the hands of great players, the question is how far this 4-0 team can ride this less-powerful set of decks. If they pull it off, they will certainly have earned their record.