Team Pro Tour has a unique way of unearthing the dinosaurs of the Magic game. Players routinely retire from the game only to get dragged back in by their friends, and it's no different among the pro ranks. We thought it would be interesting to take a look at all the players that hopped in the wayback machine and showed up here in Seattle to once again sling spells with their friends (and don't be afraid to Google some of these names if you haven't heard of them recently, many of them have been gone for some time). 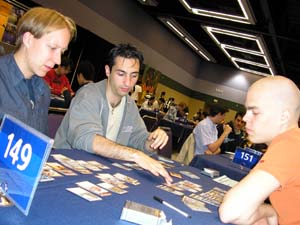 Tommi Hovi (Something Cool)
The first man ever to win multiple Pro Tours dropped away from the game for years, Tommi entered the army for a bit and came back this weekend to play with Swedish powerhouse Mattias Jorstedt and Frecnhman Raphael Levy. If this team has put in the work to return Hovi to his former skill level, they could be one to watch over the weekend.

Dave Williams, Bob Maher (Bottom Set)
After finishing second at the World Series of Poker, it was uncertain if Dave would continue playing Magic, or whether he would perhaps pursue something else that his newfound wealth would offer. After both Dave and Bob skipped U.S. Nationals, all bets were off on whether you would see either player at future Pro Tour stops, but they both showed up this weekend to play with close friend Neil Reeves.

Mike Long (Avenue Ghetto STREET BOYS)
The Pro most players love to hate, Mike has been in and out of the game over the years, but routinely makes a comeback at U.S. Nationals (as he did this year by qualifying through California Regionals). Mike is playing this year with Justin Schneider and Mike Krzywicki, his teammates from the Top 4 at Grand Prix: Pittsburgh in 2003.

Gary Wise, Andrew Cuneo (Cosmic Tones for Mental Theo)
Gary and Eugene Harvey both made the final day at the last Team Pro Tour as part of Zabuton Nemonaut, with the now-retired Mike Turian comprising their third. Eugene has been a consistent part of the Pro Tour for years (in spite of his inability to catch a flight that actually left the ground to attend this year's U.S. Nationals). However, Wise is preparing to retire from the game permanently and Cuneo (who has two Team PT Top 4s to his name as part of the original Car Acrobatic Team) routinely floats in and out of the game, and is considered one of the best Magic players in the world who doesn't play much Magic. 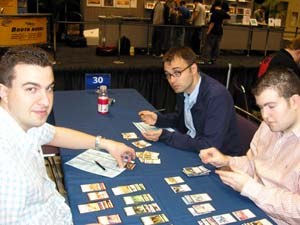 Chris Pikula (The Max Fischer Players)
The Meddling Mage qualified with the youthful Josh Ravitz while dragging another dinosaur with him -- Igor Frayman. When I talked to Ravitz earlier in the week, he said that his teammates had done a lot of work on the Sealed Deck format (Day One), but that their preparation was probably a little weak should they make Day Two.

Noah Boeken, Ryan Fuller, Chris Benafel (www.impulsemagic.com)
This team had their breakout at Tokyo in 2001, when the team won the Masters event, and both Fuller and Benafel top 8'd. Boeken is the only member of the team never to make the final day at a PT, but he has an enormous amount of Grand Prix top 8s to his credit. All three members of this team have been disqualified or banned from the game at one time or another, but are off suspension now and looking to return to their former glory.

Peter Radjonic, Terry Lau (Dead Money)
Peter is a former Canadian National Champion, while Lau made a Top 8 at PT: Los Angeles, way back in the 1998-99 season. This year they teamed up with current Canadian National Team member Michael Thicke, bringing a nice mix of old and new to this all-Canadian combination.

Katsuhiro Mori (Rendy Go!!)
The first Japanese player ever to win Rookie of the Year dropped away from the game for a while, but has made a comeback with Masashi Oiso (another Rookie of the Year winner) and relative newcomer Takuya Osawa.