Set faced off against The Brockafellers in a match as likely to be played in the Feature Match area as over a table of green felt. 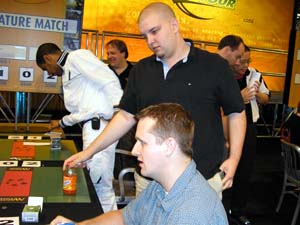 At Pro Tour Boston, The Brockafellers (William Jensen, Brock Parker, and Matt Linde) took home the PT Team title and came to Seattle looking to defend it. Bottom Set (Bob Maher, David Williams, and Neil Reeves) barely missed out on Top 4 in Boston, losing in the last round of competition to finish sixth. Maher has accomplished everything that can be done in Magic -- with his win at this year's Magic Invitational, he won the right to create his own Magic card. Bottom Set also features Magic's newest celebrity in Williams, who placed second in this year's World Series of Poker.

Williams took a quick first game off of Parker. Williams played down a Viridian Shaman, crushing Parker's Iron Myr. Parker could only sit and look at Dave's forces overwhelmed him -- without the Myr, Parker stalled at two mana.

Linde was exacting revenge for The Brockafellers, however -- Cranial Plate on an Advanced Hoverguard made for a short game for Maher. Without a flying blocker (and because Linde kept a Blue mana available to protect the Hoverguard), the seven points of flying damage a turn finished off Maher.

With Williams up a game and Maher down one, that left only the game between Neil Reeves and Jensen to see which team would take an early lead in the match.

Reeves used Condescend to stop Huey's turn three Viridian Joiner. After the Scry, Reeves spent his next turn casting Thirst For Knowledge. Jensen played down a Clockwork Condor and started to swing. An Elf Replica joined Jensen's team, and when it was blocked by Reeves' Quicksilver Elemental. Jensen cast a Ferocious Charge on the Elf.

The Elf grew to 6/6 and Jensen looked at the top two of his library. "First time I've ever Scryed," said Jensen. Reeves brought out the Limited powerhouse Triskelion, followed by a Myr Enforcer. Jensen brought out a Duplicant for the Myr Enforcer but Reeves had a second Myr Enforcer waiting. The Triskelion and Myr Enforcer continued to dominate the board for Reeves as Jensen cannot play enough creatures to save himself.

Linde was looking for the 2-0 sweep but his deck was not cooperating. He sent back his original hand and then the replacement, leaving him with only five cards to work with. Even with only the five-card hand he managed a fast start, playing a first-turn Arcbound Woker and second-turn Silver Myr. Maher has Spikeshot Goblin on turn three and the game took a turn for the worse for Linde. When Linde played out an Arcbound Bruiser Maher remarked, "I think I am out of change." But his deck had plenty of gas left. Maher played out a Furnace Whelp, proceeding to kill Linde's Specter's Shroud and Silver Myr. An Oxidda Golem on Maher's side finished off Linde.

Williams was the one having mana problems in Game 2 versus Parker, but unlike Parker, he was suffering from too many land instead of too few. After trading off creatures and spells for a couple of turns, Williams was defeated by the brothers Krark: Krark-Clan Grunt and Krark-Clan Stoker.

In the other matchup, Reeves finished off Jensen with a second win.

Because of odd timing, Parker had taken Game 3 from Williams before very much of the Linde-Maher Game 3 had taken place. That meant the outcome of the match rested in the hands of Maher and Linde. Maher needed the win for Bottom Set, but like Linde in Game 2, Maher mulliganed away his opening hand. As he kept the six cards, the deciding game got under way.

Linde started off with a Vedalken Engineer that churned out a six-casting-cost Spire Golem. Even though the Golem has Affinity for Islands, Linde only had Swamps and a Tree of Tales so he had to pay the full amount. Reeves mocked from the sideline, "See, it says six right on the card." Yet Reeves did not seemed pleased with such an early flyer for the opposing team.

When Linde's Arcbound Bruiser traded with Maher's Oxxida Golem, the Spire Golem grew to a plump 5/7 creature. Maher had brought out a Furnace Whelp but even the dragon seemed paltry compared to the Spire Golem.

Linde built his board position even further by killing the Whelp with a Murderous Spoils. Things were looking bad for Maher but he had an ace up his sleeve -- Grab the Reins. With it he took Linde's Spire Golem and threw it back in his face. 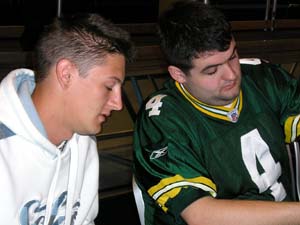 Ultimately, the match between The Brockafellers and Bottom Set came down to Maher being on one life while Linde was on two. Maher kept up the offense with a Goblin Brawler and a Goblin Replica. Linde was forced to trade his Advanced Hoverguard and to chump-block with his Engineer just to stay alive. Maher only had the Goblin Brawler out, but when Linde failed to draw a spell the Brawler ran over to deal the final two points of damage.