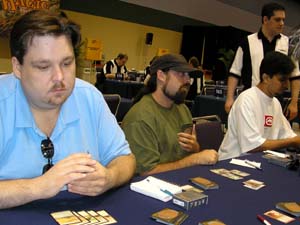 legendary Kai Budde is from Germany, although when it comes to Team Limited, many people think he and the Phoenix Foundation play on a different planet. The Phoenix Foundation's second-round matchup was against Outta Left Field, a squad comprised of solid Florida pros which has been together for two other Team Pro Tours (finishing 13th at Boston two years ago, while not making day 2 last year). Budde's team, on the other hand, needs little introduction, as they have made the Top 4 of every Team Pro Tour since 2001. Things have not gone perfectly so far for the Germans on this day, however, as they started off the tournament with a round 1 loss. A second loss would still leave them with the possibility of making day 2, but might doom their hopes of returning for yet another Sunday appearance.

Budde kept an opening hand of Leonin Battlemage, Razor Golem, Skyhunter Prowler, Viridian Shaman and some land, and drew first blood with the Prowler, and followed with the Battlemage and then the Golem. Bret Herring's board, on the other hand, was a bit short on tempo, as he played five Plains and Scythe of the Wretched before casting an unimprinted Mirror Golem. Both players got a chuckle as Herring lamented, "Worst Mirror Golem EVER." The Scythe equipped the six-mana 3/4, and an Auriok Transfixer found its way into play for Herring, but Budde crushed the Golem with Viridian Shaman, and Herring scooped up his cards and headed to game 2 with the hope he could draw some early creatures.

While Dirk Baberowski went down a game in the C seat to Wade Maraj (Marco Blume and Scott Molasky were still playing game 1 in seat B), Budde and Herring shuffled up for Game 2.

A Leonin Den-Guard and Yotian Soldier for Herring meant he had a considerably better early board than last game, while all Budde could do this time was cast a Leonin Scimitar and a Vulshok Morningstar. Deconstruct on Herring's Bola rid the German of the troublesome equipment with enough mana left over to cast Leonin Battlemage, instantly stabilizing the board. Skyhunter Prowler entered the fray for Budde and turned into a rather intimidating flier when equipped. Soul Nova on the Prowler was exactly what Herring needed to clean up what looked to be an uncomfortable situation…until Budde cast Razor Barrier. Herring's army of Den-Guard, Yoti, and Stalking Stones looked weak when compared to Budde's crew of Battlemage, Prowler and Tel-Jilad Exile and the situation deteriorated significantly when Budde cast Razormane Masticore, or as he called it, "kitty cat."

Blinding Beam from Herring slowed Budde's charge, and Altar's Light during Budde's upkeep (but before his draw) killed the kitty, but Herring's life was dwindling rapidly, and a late Titanium Golem proved far too little to stem the tide.

Dirk evened up the game count for his match, while Marco lost, meaning a possible 0-2 start for Phoenix Foundation would hinge on game 3 in the C seat.

Maraj (player C for Left Field) kept his first seven, as Baberowski was forced to toss his hand back. Maraj drew first blood with an attack of Vulshok Berserker and Sylvok Explorer, while Baberowski swung back for five with his Nim Shrieker. Wizard Replica was placed in the Shrieker's path, as Baberowski equipped the Shrieker with a three-counter Opaline Bracer and kept it back to black, only to watch it get blown out of the sky by Shrapnel Blast at the end of his turn. Maraj followed this monster play with a Goblin Dirigible, increasing the pressure on Baberowski, who was sitting dead at the moment with a hand full of blue cards and no Island. 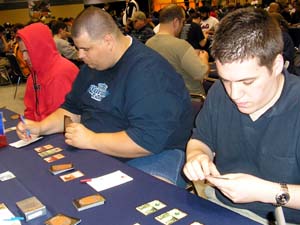 He finally found one on the top of is deck and cast Somber Hoverguard, equipping it with the Bracers and passing the turn. Maraj cast another Berserker and swung with the team, losing the Dirigible in the process, but dropping Baberowski to one. Vedalken Engineer and a second Ancient Den were not the play Baberowski was looking for, as Maraj attacked again for the final point of life.