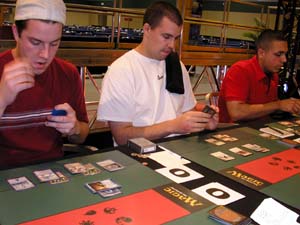 American Way is the most-recent incarnation of the team that started as Slay, Pillage, and Massacre. Jon Sonne is the only current member of that team on the new version, as he has now been joined by fellow TOGIT member Gerard Fabiano and U.S. National Champion Craig Krempels. The team (whatever its composition) has a long history of strong finishes at Team Limited events, and looks to extend that streak after a 3-0 start. Also at 3-0 is Must Be a Pro!, a West Coast team composed of two current Grand Prix winners (Ken Ho and Ben Rubin, who also own a Pro Tour and two Masters titles between them), and California pro Gary Talim. A win for either team would guarantee them a place in day 2, while the losing team would be left with some work to do to reach the drafting portion of the tournament.

Gary Talim opened the showdown with a compliment: "Congrats by the way, for Nats," referring to Krempels' recent victory at U.S. Nationals.

Both players kept their opening hands, as Krempels started off with a Talisman of Unity while Talim cast an early Leonin Bola and Raise the Alarm. A Mask of Memory-equipped Neurok Prodigy allowed Krempels to draw some cards, but Talim had a tempo trump card in Grafted Wargear and then Spikeshot Goblin. The Goblin died to Essence Drain, but Krempels was still taking five a turn from the two Soldier tokens. A second Spikeshot Goblin from Talim made things look very grim, but Krempels' hand was literally bulging with cards, so if his deck had answers, he certainly had a good chance of having found them. Wizard Replica, Leaden Myr, and Aether Spellbomb all hit the board for Krempels before he passed the turn.

The 4/3 token attacked, but did no damage as Krempels bounced it off the board. Gary then killed the Prodigy with Spikeshot and passed the turn, still stuck on three land though you would hardly notice it from the life totals. Krempels finally found an emphatic answer in the form of Reiver Demon, which cleared Talim's side of the board while leaving Craig with a myr and Wizard Replica. Talim cast a lonely Yotian Soldier, before passing the turn again. Krempels played another huge flyer in Mephidross Vampire and thought hard about blocking with it as Talim attacked him with a Wargear-equipped Yotian Soldier. Krempels took the damage, dropping to three. Talim then cast Slth Ascendant, giving him a flyer as well.

Reiver Demon was tapped, Shatter killed a Wizard Replica, but the Vampire and a myr made it through, equaling the life totals in precarious territory.

Talim cast Vulshok Sorcerer and moved his Wargear over to the Slith Ascendant, looking to end things, but Krempels had Echoing Truth to bounce the Slith, so Talim was forced to scoop.

An Alpha Myr from Talim traded early with a Gold Myr from Krempels, but Talim took command with another Grafted Wargear, this time equipping an Emissary of Hope, thumping Krempels for five. Talim then Arrested a Somber Hoverguard, and smacked Craig for another five before Essence Drain got rid of the hefty flyer. Leonin Shikari and Yotian Soldier were a strong follow-up from Talim, especially when he played a Mask of Memory and began moving his equipment at instant speed.

"You're at…?" asked Talim, inquiring after Krempel's life total.

Pewter Golem picked off the meddlesome Shikari as Yotian Soldier dropped Krempels to three, but Talim kept the pressure on by casting a Spikeshot Goblin. One turn and a pumped Spikeshot later, and the match was evened.

As Krempels was Parising to six, Fabiano evened up his match. A third-turn Dross Golem from Krempels was matched by a Raise the Alarm and Skyhunter Prowler.

"If you play that damned Grafted Wargear again, I'm coming across the table," exclaimed Krempels.

"Not this time," was Talim's response, as he merely cast a Leonin Bola, attacked with the Prowler and passed the turn. Terror from Krempels killed the Prowler, as Talim cast Electrostatic Bolt on Dross Golem in response. The board reformed with a Cackling Imp for Krempels and a Hematite Golem for Talim. Since Krempels' evasion creatures kept drawing him cards (with a little help from Mask of Memory), Talim needed to do something or run the risk of falling vastly behind. 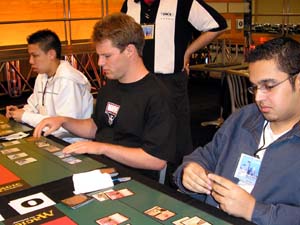 That something came in the form of Loxodon Stalwart, but Krempels countered it by sacrificing a fresh Wizard Replica. A Somber Hoverguard increased Krempels' air force, adding additional unblockable damage. Altar's Light finally got rid of the Mask, but Krempels kicked things up another notch with Mephidross Vampire. Grafted Wargear made yet another appearance, but it wasn't enough, as Krempels was able to attack Talim down to three on the next turn, and throw an Essence Drain at Gary's dome to seal the win.

As Krempels notched his victory, Fabiano busied himself with thumping Ken Ho with the combo of Troll Ascetic, Fangren Hunter, and Guardian Idol. Ho found no answers, as Fabiano removed any blockers in his army's way and utterly thrashed Ken to send American Way to 4-0. Jon Sonne scooped after Gerard won, making the final score 2-1.