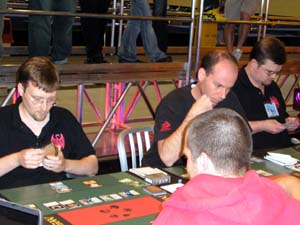 teams of legends meeting in round 5 of a tournament is usually only black or white -- meaning they usually seem to face off when they are undefeated or facing elimination. In this case it's the latter, as both teams are 2-2 right now, and one more loss would mean they would not be able to make day 2.

Arguably the highest-profile match of day one, the Phoenix Foundation-Your Move Games showdown started auspiciously for this intrepid reporter.

Dirk Baberowski: (Something in German)
Rob Dougherty: "What does that mean?"
Dirk: "I can't tell you. He's covering for a family-friendly website, so it can't be repeated."

Baberowski won the die roll as both players kept their opening hands. A second-turn Thought Courier from Baberowski gave him an early advantage, as he would be able to churn through his deck rapidly, searching out the best cards from an already strong deck and discarding the chaff. Viridian Shaman from Dougherty took out Dirk's Pentad Prism, which he just replaced with a second one a turn later. The Shaman drew first blood, and Rob Deconstructed the second Prism - earning a frown from Dirk and a "That's not very nice" retort. Dougherty wasn't done though, as he used the Deconstruct mana to cast Fangren Firstborn, giving him a very intimidating team, provided he got to untap and attack.

Meanwhile in the A seat, Kai Budde made quick work of Darwin Kastle, giving ze Germans an early lead in the match.

Back to the Baberowski -Dougherty matchup, a Sculpting Steel from Baberowski copied Dougherty's Talisman of Progress (raising a curious eyebrow), but Dirk passed the turn with no further action. Jens joined Rob's team, as Dirk said "hmm, I'm not sure if I have any outs here." He did though, as he dropped another land, cast another Talisman, and Irradiated the Firstborn. Dougherty's next attack dropped Dirk to five, but when Dirk untapped he just shrugged and cast Platinum Angel, saying, "I'm all in."

Dougherty's next attack dropped Dirk's life totals into the negative, but he had a chance as long as the Angel remained in play. A swing from the Platy marked Dirk's first attack of the game. Dougherty cast a 5/5 Skyreach Manta, which Dirk promptly Annuled, keeping the path clear for his Angel to beat down. Two more Angel swings plus some pings from his Talismans dropped Rob to six as he cast Ferocious Charge at the end of Dirk's turn, looking for an artifact kill spell, but again failing to find anything. Two more swings from the Angel and an exclamation of "How lucky!" from Dirk, and ze German had taken the lead.

"Was that Angel off the top?" asked Dirk.
"No, it was in the hand. Just needed some mana," was Dougherty's answer.

"Sadly, I'm going to have to send this one back…all colors of mana, but not a spell to be seen," lamented from Dirk, as Rob kept his opening hand. Meanwhile, Darwin smashed back against Kai saying, "I felt like I was playing Ravager Affinity in that game. I was like, 'OK, all in with my Ravager.' "

Back in our featured match, Dirk was stuck on one land, in spite of searching out an extra card through a Chromatic Sphere and holding a hand full of two-drops. Strangely, Dougherty had no pressure at all, even on turn five, though he did have four available colors of mana. A Viridian Shaman on Dirk's Aether Spellbomb meant the German would draw no additional cards, and things became very grim when a Fangren Hunter hit the board. Dirk found no more land for the whole game, in spite of drawing seventeen cards, and quickly fell to Dougherty's Team Green.

While two pairs were set to move to Game 3, it took a little time for Humphreys to even his match at one apiece with Marco.

Dirk ramped his mana quickly in game 3, starting off with three lands, two Talismans, and a Thought Courier, then casting Looming Hoverguard, returning Rob's Talisman to the top of his Library. Dougherty cast his answer with a 4/4 Skyreach Manta. Dirk attacked into the Manta, and while Rob was pondering whether or not to block, Kai finished off Darwin, putting ze Germans up a match.

Dougherty decided to take the damage from the Hoverguard, and Dirk followed up with a Myr Enforcer. Rob Deconstructed the Enforcer and used the mana to cast Ouphe Vandals before swinging with his team and dropping Dirk to thirteen. Dougherty lost his Manta to a block from Looming Hoverguard and Irradiate, explaining Dirk's earlier attack, but not leaving Dougherty with a happy look on his face. Now that its path was unimpeded, the Hoverguard went to work, taking three point chunks out of Dougherty's life total. Fangren Hunter met a Condescend, as Wall of Blood continued to hold down the ground for Dirk. 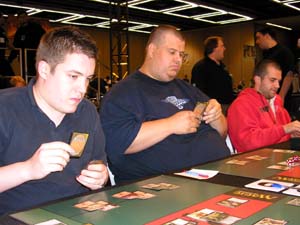 A desperate attack from Rob saw him lose two creatures to Dirk's zero, but he managed to drop Dirk's life to nine, and cast One Dozen Eyes for five 1/1s, possibly setting up a kill next turn (if Rob had Echoing Courage in hand). Dirk attacked with just the Somber next turn, dropping Rob to five, before Dougherty swung back with his team. No tricks ensued though, and Dougherty died on the next turn to a blue-flyer beatdown.