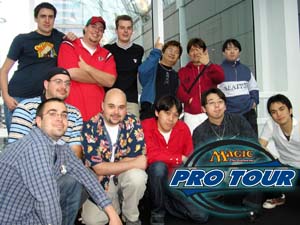 The glass is definitely half-full…

It would be very easy to focus on the big names who failed to advance to the second day of competition, but there were clearly too many big names in the hunt for Day Two to accommodate them all. Sure, Kai Budde, Nicolai Herzog, Rob Dougherty, and Jon Finkel would not be getting a chance to put their Rochester Draft skills to good use, but something had to give.

A quick look at the top of the standings should not be much of a surprise to anyone as it is full of top players. The real surprise comes at the very top where S.A.I. (Ichirou Shimura, Masami Ibamoto, and Ryuuichi Arita) sits alone as the only 6-0 team. Shimura is a Grand Prix Champion but their team is the only one in the Top 4 that does not sport a big-name player.

Cosmic Tones for Mental Therapy (Eugene Harvey, Andrew Cuneo, and Gary Wise) is the latest in a series of wining teams featuring some number of these players that goes back to Car Acrobatic Team/Potato Nation/Zabutan Nemonaut.

Bottom Set (Dave Williams, Neil Reeves, Bob Maher) is one player off -- Gary Wise, to be precise -- from the Courtney's Boys version that finished in the Top 4 of Pro Tour Boston. Yes, that is the same Dave Williams who won $3.5 million at the World Series of Poker.

The American Way (Craig Krempels, Jonathan Sonne, and Gerard Fabiano) are aptly named since they are led by U.S. National Champion Craig Krempels. This is another slightly modified team that has experienced past success. If you swap Krempels for Scott McCord, you would have Slay Pillage Gerard, the team that finished Top 4 two Pro Tour Bostons ago.

As you go beyond the Top 4, the hits keep on coming. Osyp Lebedowicz, Bram Snepvangers, Itaru Ishida, Jeroen Remie, Kamiel Cornelissen, Rickard Osterberg, William Jensen, Matt Linde, Mike Thicke, Tim Aten, the Ruel Brothers, Gabriel Nassif, and so many more are all advancing to the Rochester Draft portion on Saturday.

Of special note are a handful of old-timey players still alive. Chris Pikula, Igor Frayman, Tommi Hovi, Bryce Currance, and Frank Gilson were among a handful of surprising names to advance to Day Two.