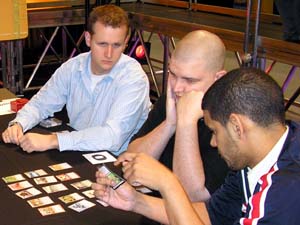 talking to The American Way before the draft, the first thing they explained was that Jon Sonne was in charge. It seems that during the twenty-plus practice drafts they did at TOGIT in preparation for this event, they figured out that each player had a very different idea as to what the decks should look like, and it was causing problems with both their communication and the quality of their decks. After winning their first four practice drafts, they then went on a twenty-match losing streak (and they said this number was exact), losing to practically everybody and their dog along the way. So coming into the tournament, they had decided to stop fighting about picks and leave it to John to make the tough decisions.

When asked about their strategy, they explained they wanted to put Green in seat A, heavy White with Red in seat B, and Blue/Black in seat C. This strategy was subject to change though, depending not on what their opponents were playing, but more on what strong cards were being opened. This left them with a general strategy to pursue, but enough flexibility to still draft strong decks, even if the packs weren't going their way.

In contrast to The American Way, who had done more than twenty practice drafts in the last few weeks at TOGIT, Bottom Set came into Day 2 having done exactly one practice draft, and that was last night after dinner. They did, however, talk to Kai Budde and ze Germans about what their draft strategy should be. It appears Kai and company had done 35-40 drafts when preparing for the competition, but unfortunately did not make it out of Day 1 to use what they had learned. When discussing this, Bob looked at Dave and said, "You know, I don't think I've done 40 team Rochesters in my whole life… including all the Grand Prix and such. Dave did a little Team Sealed practice while he was in Vegas, but we didn't prepare much for this event."

"Yeah, because there's so little to do in Vegas that you really want to practice Team Sealed," quipped Reeves.

"I did though. We went to the game store and bought packs to work with, and ran some Team Sealed in Vegas. Shrug."

The suggested strategy from ze Germans was to put Red/Black or Red/Blue in seat A, mono-White in seat B, and Blue/Red on the left, essentially abandoning any green cards in favor of "good spells." If they did have to run green, they were going to put it in the B seat and create a White/Green deck.

Bottom Set kicked off and Reeves opened a Blinding Beam, while Bob got a Spikeshot Goblin, Krempels grabbed a Solemn Simulacrum, and Sonne got Raise the Alarm. As the packs continued, American Way switched the C seat up to take advantage of some strong Red cards that came their way, putting Gerard into R/B with a splash of Blue, with everything else according to plan. Unfortunately for them, Bottom Set was opening a little bit better, as Maher's deck went U/R, Williams built a solid U/B deck, and Reeves ended up with three (yes, three) Blinding Beams at the end of Mirrodin.

Unfortunately, it all started to go downhill from there. The first Darksteel pack gave Williams a Greater Harvester, but delivered Echoing Decay, Barbed Lightning, and Oxidize to the American Way. Things got worse as Gerard first-picked a Dismantle out of his pack, which scared Bob out of a probable Sunburst plan in pack 3, this forcing him to modify his draft strategy down the road. As the packs continued, they delivered strong late picks to American Way, while leaving Bottom Set with few solid late picks for their decks. It wasn't necessarily that Bottom Set was getting outdrafted, but more that the cards simply were not there for them.

The problems continued in Fifth Dawn, where Sonne got some very strong red cards like Furnace Whelp plus late Rain of Rust and Gerard ended up with two Cranial Platings, while Bottom Set was still scrambling to complete their decks with enough solid picks to be competitive.

Analysis from Bottom Set:
Neil Reeves had this to say after the draft: "I have three Blinding Beams and yet I didn't end up with a deck. How does that happen? All I was looking to do was pick small guys somewhere and the just never showed up. I have two two-mana guys and two three-mana guys and then my whole deck is fat, but I don't have any early acceleration. They crushed us with their fifth through seventh picks. They kept getting quality and we got nothing from ours. It was awful.

Bob also felt his deck was very weak and would have a hard time with Gerard's card quality. The Dismantle in pack 2 for Gerard plus zero Vedalken Engineers had scared him out of what was once a plan to go with sunburst in his seat, leaving him scrambling for enough good cards to play. Dave's deck was solid all the way through, but it would be a battle of his flyers and counterspells against Krempels' acceleration and fat. 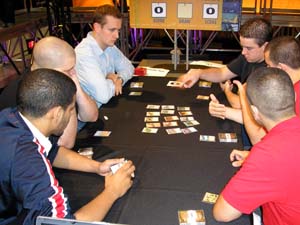 Analysis from The American Way
Craig Krempels summed things up this way: "Our decks are good, but we don't feel like we slaughtered them here. Like, Jon's deck is good, but three Blinding Beams are still going to be hard to play through. I think Gerard has a good matchup against Bob, and I'm not sure how I'm going to do. Well, that's not true… I'm obviously going to win because I'm the great Craig Krempels, but you know, Dave's deck isn't awful."

Added Gerard Fabiano, "My deck is pretty good. We drafted pretty well. I think we can win, but they are really good players, so even though their decks aren't as good, I think they've still got a shot."