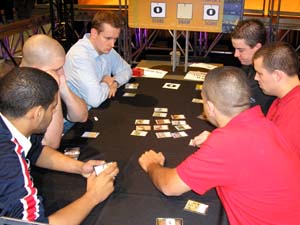 Set are again proving they are masters of the Team Limited format, starting Day 2 third in the standings despite having very little practice. Of course, that's easier to do when you have The Great One (Bob Maher), the man they call J.T. Money (Neil Reeves), and Magic's newest celebrity, World Series of Poker runner-up Dave Williams. After finishing sixth last year, they predicted they would either do awful on day 2 or we would see them again on Sunday, just like in 2002.

Sitting across the table from them was The American Way, another team with a long history of Team Limited success, though with a slightly different composition and a new name. Composed of U.S. National champion Craig Krempels and the remaining two-thirds of Slay, Pillage, Gerard (Jon Sonne, Gerard Fabiano), they are looking to improve on their 5-1 record from Day 1, and perhaps reprise half of the same final four that saw Maher and Reeves make it two years ago.

A second-turn Grimclaw Bats from Williams made for a nice, aggressive start, while Krempels began with a Pentad Prism, Healer's Headdress, and platinum hit, Elf Replica. Fleshgrafter joined Dave's team, while Krempels used his Prism to cast a turn-five Trolls of Tel-Jilad.

Dave used a Slagwurm Armor on his Fleshgrafter to gum up the ground, as his Bats and Cackling Imp beat down through the air. Krempels attempted to pull ahead with ground pounders such as Tangle Asp, Sylvok Explorer, and an Opaline Bracers, but the Bracers hit a Condescend, leaving Craig with the Trolls and an army of one-powered kids. Meanwhile, Dave kept plinking away for two a turn, and upped it to three when the unblockable Ferropede entered the fray. When Krempels couldn't find any answers, he scooped up his cards and they headed to game 2.

"See, that's what you call… runnin hot," said Dave, pointing to the Island he had just drawn off the top of his deck. "I told you man, I'm runnin' hot in life right now."

Neurok Prodigy for Dave plus a Tangle Asp, Pentad Prism, and a turn-four Tangle Golem for Krempels insured "the Champ" (as we now have to call him for the next calendar year) would have a little more action than the last game. Echoing Ruin from Krempels took out a Wizard Replica, but the poker superstar had an answer in the form of a hefty Greater Harvester. Krempels attacked his Tangle Golem into the Harvester, leaving Williams to figure out whether or not Krempels was bluffing a Predator's Strike. Dave let the Golem through, and Krempels cast Myr Enforcer to make sure the Harvester would have problems hitting home.

Williams attacked with the Harvester and Prodigy after doing some math in his head. Before damage was on the stack, he asked "If you have Predator's Strike, just show me and I'll scoop 'em up." Krempels didn't have the Strike, but he did have the equally effective Stand Together, so it was off to Game 3.

While waiting for their teammates to catch up, Krempels killed time by trying on Dave's watch.

"'Got 44 around the bezel', wah wah wah… I'm Dave Williams. I'm too rich to shave, though," pointing out Williams' somewhat scraggly facial growth.

"That's right," Dave smiled, "now I have people shave me."

As Seat A was shuffling up, Neil Reeves took down the supposedly unwinnable matchup over in B, and put Bottom Set up a match.

Neurok Prodigy again set the pace for Williams, while Krempels responded with Sylvok Explorer, Leonin Bola, and two Pentad Prisms. "God, he can cast anything in Magic right now," lamented Dave, pointing out Krempels' nine available mana on turn 4. Krempels only had a Fangren Pathcutter, while Williams increased the tempo of his beatings with Cackling Imp, followed by Wall of Blood and Blind Creeper.

Krempels cast Tangle Asp, Healer's Headdress, and Echoing Ruin on his own and used Prisms to kill the Creeper, trying to stem the tide of flying beaters through tapping them and preventing some damage. The Pathcutter began to race with Dave's lone flyer each turn (one was being tapped) until the point that Williams actually needed to stop attacking and equip his Cackling Imp with Slagwurm Armor. Draw, go played out for a while as Dave slowly whittled away Krempels' life with Imp activations, and Krempels waited to draw out of his mana flood.

"You gotta win, Craig!" was Gerard's exhortation, as he finished off Maher 2-0 to even the match.

Annul countered Krempels's Myr Enforcer, and Dave cast Chittering Rats on his turn, but since Krempels had no cards in hand, it was merely a 2/2. The life totals were 5-4 in favor of Krempels as Dave sent the Rats and Cackling Imp into the zone. Krempels traded his Tel-Jilad Chosen with the Rats, as Williams said, "Gah, I made a mistake there, I should have moved it."

Krempels went all-in by pushing his Tangle Asp and Sylvok Explorer into the red zone, hoping that Williams was merely bluffing a Condescend in his hand, and that Predator's Strike on Craig's unblocked creature would finish things. Williams had the card, though, and Bottom Set -- despite of being outopened and outdrafted -- took the match 2-1. After the match, Dave pointed out that he hadn't actually made a mistake, since he needed the mana to be sure he could Condescend the Strike.

"Dave, do you realize how long it's been since this happened?" asked Maher.

"This is the first time in years that I have actually lost a match and our team has won."

"That's because you used to have Gary on the team, Bob. Now you've got me," Williams answered.