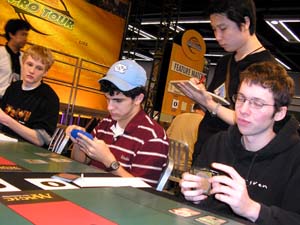 Ichiro Shimura may not be a household name, his team was where every team hoped to be -- 7-0. Tim Aten sat down talking about how his team, :B, qualified for PT Seattle. At Grand Prix Washington D.C., :B qualified when the last slot passed down to eighth place. Aten also spoke about being frustrated by the Fifth Dawn packs. He felt his deck was very good until Fifth Dawn, and then the lack of cards in black and red really hampered him. Shimura (winner of Grand Prix Sendai) and his teammates, Masami Ibamoto and Ryuuichi Arita, laughed about how in the two drafts they hadn't seen a single Spikeshot Goblin but had seen four Pulse of the Forges and four Fireballs.

Shimura began the match with an Iron Myr followed by a Dross Golem. A Nim Replica halted the Golem and Myr. Shimura brought out his first pick: Ferropede. Aten must have planned on activating his Nim Replica because he just played a land and passed the turn. Shimura didn't want to two-for-one himself so he just attacked with Ferropede, which Aten killed with the Replica.

When Aten attempted to bring out Cackling Imp, Shimura had a Condescend waiting. Being behind on tempo versus a deck with multiple Condescends spelled trouble for Aten. Shimura continued the pressure with Grimclaw Bats and a Neurok Spy. Aten played out Chittering Rat and traded them for the Neurok Spy. Aten looked down at his life total (2) and absolute lack of creatures against Shimura's four monsters and conceded.

Meanwhile, Gadiel Szleifer had just won the first game against Masami Ibamoto relying on the power of Qumulox and Icy Manipulator.

While Aten and Shimura were shuffling, a look down to the white mirror match showed that both John Pelcak and Ryuuichi Arita with a tons of permanents out. Each turn they would draw and cast another creature before saying go. Arita eventually broke the stalemate to take the first game.

Aten had a much better start this game with a turn-two Alpha Myr, turn-three Vulshok Morningstar and Tooth of Chiss-Goria. After leaving four mana untapped on his fourth turn, Shimura Irradiated Aten's Alpha Myr in response to Aten trying to equip. Shimura then played a Grimclaw Bats and Tooth of Chiss-Goria while Aten could only answer with Scavenging Scarab.

Szleifer's Qumulox was cleaning up Ibamoto -- the 5/4 flyer was too much to deal with for a Green/Red player. The win for Szleifer placed :B up 1-0 in the match.

Aten decided his best plan was to Morningstar up the Scarab and take a swing. With two cards in Aten's hand Shimura must have been worried about Pulse of the Forge, but he took another six from the Scarab without having played any spells on his turn.

Shimura plays out a Quicksilver Behemoth but was forced to trade with the Scarab after Aten Barbed Lightning Shimura and his Grimclaw Bats. Shimura played out a Scavenging Scarab, a fine attacker but not what he was looking for at only two life. The Scarab became a little more useful when Shimura played out a Leonin Bola…that is, until Aten cast hasted Vulshok Berserker. Shimura sat thinking but wasn't able to Condescend for enough mana so had to let the lethal Berserker resolve.

The match between Pelcak and Arita saw Pelcak in good shape. His Summoning Station was pumping out at least one 2/2 a turn, if not more. An Engineered Explosives for Pelcak wiped Arita's board and tied the match at one game apiece. Now :B just needed either a win from Aten or Pelcak to take the match, while S.A.I. would need both Shimura and Arita to win.

Both players laid a second turn Myr -- Silver for Shimura and Alpha for Aten. Shimura's Myr fired out a Nim Replica and a Slagwurm Armor. Alpha Myr led the way and charged in for the first blood of the game. Aten didn't waste any time in hitting Nim Replica with a Barbed Lightning. Aten would have liked to trick Shimura into using the Slagwurm armor but didn't want to risk letting the Nim kill his Myr.

Shimura decided to equip his Silver Myr with Slagwurm Armor, making it a 1/7. Aten just played Vulshok Morningstar. A Ferropede and Quicksilver Behemoth came out for Shimura. Aten spent his time to equip the Morningstar and play a Vulshok Berserker. Slagwurm Armor was holding both the Berserker and Myr back. Shimura spent a lot time thinking before he Irradiated the Berserker. Shimura then summoned another Quicksilver Behemoth.

Whatever Shimura drew caused the spectators to laugh. Shimura decided to send his entire team in for damage. Quicksilver Behemoth traded with an Krark-Clan Ogre. Aten had just the Alpha Myr left versus a 6/11. The 4/3 Myr was not afraid and went in for an attack. Shimura decided not to block with his Behemoth so that the monster would be able to attack back. Pelcak had just lost his match to Arita, so both teams' fates rested on the outcome of this game. Oxxida Golem chump-blocked the Behemoth to buy time in order for Aten to draw enough land to cast Arachnoid. Shimura continued to wear Aten down with Ferropede, and a Cackling Imp joined his team to double the damage dealing. With Aten at six life things were looking grim for :B. Aten brought out a Cackling Imp of his own and both imps received equipment on the next turn.

Aten drew and went into think-tank mode. Both teams gathered around this crucial game. If S.A.I. won, they would move to 8-0. However, :B could put themselves at 7-1 and in great shape for making Top 4. 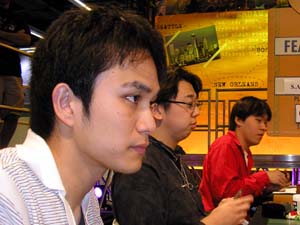 Aten had three cards in his hand and continuously shuffled them. Aten thought for so long that it felt as if he was trying to make Shimura forget about the Imp's special ability. Eventually, Aten decided to play out Moriok Scavenger, returning Oxxida Golem.

Shimura activated Cackling Imp as soon as Aten passed the turn. Shimura attacked Aten down to two life with Ferropede. During Shimura's end step, Aten played Pulse of the Forge but Shimura had one of his two Condescends waiting. Since he had no cards in hand the turn before, Shimura must have just drawn the Condescend! Aten started to mutter to himself about how he should have cast the Pulse on his own turn instead of letting Shimura draw. But even with the extra cast, Shimura still would have still been on ten life.
Aten drew and knew he couldn't deal with both the 2/8 cackling imp and unblockable Ferropede so he extended his hand and the match went to S.A.I.