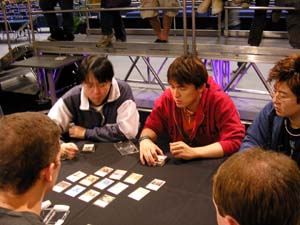 this match, I chose to sit in on the Gary Wise/Jin Okamoto showdown. Partly it was because Gary's a funny guy who tends to talk a lot during matches, and it doesn't hurt that he and I used to play together. Plus there's the whole record he's going for today (first player to land four Sunday appearances in Team Limited). Mostly, however, it was because they were at the end of the table, and that's where my chair was. Inertia rules.

Wise won the roll and chose to play first, but it was Jin who was all smiles. He opened with turn-one Conjurer's Bauble, then sacrificed it turn two and dropped out a Leonin Squire to get it back, which was good for a pained groan from Wise. About this time I looked over to the Cuneo match and saw Trinket Mage equipped with Skullclamp on turn 4. A turn later though, Cuneo had the Oxidize, so it looked that one was going to be a real game.

By the time I turned back to the current match, Jin had played out a Krark-Clan Stoker on turn 3, and then got an even more pained groan from Wise on turn 4 when he played out his Bauble again, sacrificed it, and got it back again with Leonin Squire No. 2. Wise laid his fourth Mountain, cast a Vulshok Berserker and said go.

At this point Ishida took Game 1 from Eugene. I'm told the Sword of Fire and Ice was indeed involved. Not surprising, considering we were only six minutes into the round.

Jin added an impressive-looking Arcbound Bruiser to the table, to which Wise only had a Silver Myr in response. Things were looking very bad for Wise. Though he'd at last have access to blue mana, he was down a ton of tempo and a ton of cards. At this point Cuneo looked over to Wise, who shook his head slightly, clearly indicating he didn't like his chances here. It turns out he had all three of his splash cards in hand, and a couple turns later the players were off to their shuffling phase.

In game 2, Jin took a mulligan so I took the chance to glance back to the Cuneo/Ikeda match, where they were still mired in game 1 with piles of permanents on each side of the board.

Looking next to the Cuneo/ Ikeda match, it looked like turn five of their second game. Ishida had Sword of Fire and Ice equipped again and was swinging with a random ogre. A Fleshgrafter tried to block it, but after the artifact was discarded Ishida had the Ferocious Charge. Ouch.

Back to the Wise/Jin match. While I was looking at the other games, Jin got to abuse his Leonin Squire/Bauble combo again for this second game, effectively getting back his mulliganed card in the process. He also had turn-four Leonin Battlemage, which would have been a game swinger -- but Wise had the Barbed Lightning to stop it before it became active.

At this point, Eugene lost the second game and his match. Guess he was right about Sword of Fire and Ice being a problem.

This time Wise had some aggro going on with Vulshok War Boar and Neurok Prodigy, but he was down about four cards to Jin, who had managed to double up on his Squire combo again and was sitting on Arcbound Bruiser plus Vulshok Morningstar. He added a Vulshok Sorcerer to the team to ping out the Prodigy, and Wise was about in trouble.

However, Wise had Unforge plus his own hasty Tim to take out the Bruiser/Morningstar pair and a Duplicant for the next threat. It also turned out that Jin's hand of four cards had no gas beyond a Blinding Beam to buy time, and after his next draw phase revealed nothing, he scooped up his cards to head to game 3. Meanwhile, half an hour into the match, the Cuneo/Ikeda match was still in game 1 with no player yet having a clear advantage.

Jin opened game 3 with a turn-one Bauble again, causing a noticeable grimace from Wise. When a Squire hit on turn two yet again to draw Jin an extra card, Wise grabbed it and threw it to the ground, only mostly joking around. "Every time!" Bauble came back down turn three, and when Jin tapped two mana to summon another creature, Wise was only too relieved to see Arcbound Stinger rather than Squire No. 2.

At this point Cuneo put away Game 1 of his match, mostly on the back of the Auriok Salvagers/Conjurer's Bauble combo.

Back at Gary's match, Jin was clearly on offense, having followed up his Squire and Stinger with a Quadropod, followed by a very menacing Vulshok Morningstar. Wise had only summoned a (defensive) Berserker. Gary untapped at 9 life, didn't have a fifth land, and had to say go again. At the same time, word came from Cuneo that he had just lost Game 2 of his match just a few minutes after their first game had ended, putting them at 1-1. When Wise asked "Quick game?" Cuneo responded: "I stalled at two [lands]." 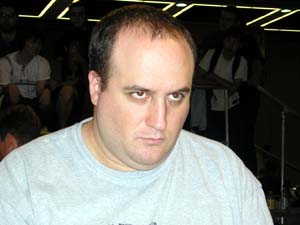 Though Wise was on the ropes, it wasn't over yet. He had Unforge for the Morningstar (which was equipped to Quadropod, so he didn't even get to kill a creature), but he was so far behind that things looked very bad. Starved for mana and behind on tempo, Wise was forced to play out a Dawn's Reflection on his newly drawn fifth land, but had nothing else for his turn. He still wasn't quite out yet. After he got knocked down to four life, he cast Barbed Lightning on the Stoker, untapped, and pointed a Beacon of Destruction at the Quadropod. It was a valiant effort, but with Arcbound Stinger, Krark-Clan Shaman and Viridian Longbow on the other side of the table he was just too far behind on life and tempo to get the chance to use all the cards remaining in his hand.

A few minutes later Cuneo lost his match to Blasting Station/Nuisance Engine craziness and Gary was put out of his misery by a Blinding Beam. The Japanese had pulled off the 3-0 sweep!