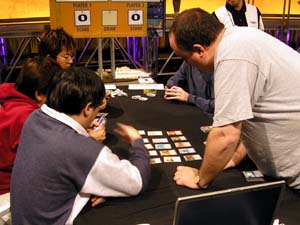 I sat down to cover this draft, I asked Gary Wise to verify his team name for me. He concentrated for a moment, then listed off the entire team name. After a pause he got a big smile and threw his hands into the air in triumph. "I got it! That's the first time I got it!" His teammates smiled proudly at the accomplishment.

Joining Gary for this event are former U.S. champ Eugene Harvey and former Car Acrobat Team member Andrew Cuneo. Though all three players have strong resumes, it's the Wise one who is going for the record this weekend: first player to make four Sundays in Team Limited.

Standing between him and that impressive record are Itaru Ishida, Tsuyoshi Ikeda, and Jin Okamoto. Jin, nicknamed The Last Emperor, was the winner of the last APAC championship and also took second place at the 2003 World Championships. Ishida is regarded as one of the best players in Japan and has done well on the Grand Prix circuit in the region. Ishida is no stranger to success in this format, having played as part of Panzer Hunter on the old Masters circuit.

For this draft, the Japanese won the flip and ended up on the kick. When I asked the Americans their opinion on this, Wise said that statistics for the last couple of years showed it to be basically dead even, so they didn't really care much one way or the other. Though I wasn't able to find out the Japanese strategy coming into the draft, Wise summed up his team's plan as usually putting himself in blue (with green or red), Cuneo typically in green-white, and Harvey most commonly in black.

For the first pack, the Japanese got a Pyrite Spellbomb and Electrostatic Bolt. Harvey got a Wail of the Nym, Cuneo got Fireshrieker, and Wise ended up with a Silver Myr. As the draft evolved, the early packs were respectable but not amazing. Eugene's deck settled pretty quickly into blue/black while Cuneo just as quickly ended up in green/white, all according to plan.

Gary's deck, on the other hand, was all over the place. Given his teammates' color combinations, it was clear he'd need to go into red, but it was slow happening. When a shot at Oxidda Golem came up early in Darksteel, Harvey motioned for Wise to take it but Gary grabbed a different card instead. They talked about this moment after the draft and Gary defended the pick, pointing out that he only had a couple red cards at that point. Eugene and Andrew pointed out that he was the only red player on their team, so clearly he was going to have to go that way. As Eugene pointed out "The draft doesn't end at Darksteel…"

Both teams opened big packs, but the Japanese got the better of it because they often got strong cards off of the opposing big packs as well as their own. Cuneo opened an Icy for himself and a Duplicant for Wise, but the Japanese got to pluck a Barter in Blood, Nuisance Engine, and Viridian Longbow from the same pack. Wise opened a Loxodon Warhammer for himself, but had to ship a second Viridian Longbow as well as a Spikeshot Goblin. The monster pack for the Japanese came when their center player, Ikeda, opened Skullclampand Sword of Fire and Ice. The Japanese got to scoop up both cards, and although the Americans got to grab some decent cards themselves the power difference was dramatic.

I sat down with the players after the draft, starting with the Americans. All three players agreed that Gary was in trouble against Jin's white/red deck. Eugene felt very confident in his match against Ishida, except for the presence of Sword of Fire and Ice. As he put it: "I can't lose my matchup unless my opponent has Sword."

Cuneo's match, however, was trickier to evaluate. Ikeda had drafted a blue/black monstrosity featuring Skullclamp, two Trinket Mages, Blasting Station, and Nuisance Engine, not to mention Skeleton Shard. Asked about his chances, Cuneo responded "I'm going to face a lot of Skullclamp." I asked again, pointing out he hadn't answered the question. He thought about it some more and shrugged a bit. "You know, I'm not sure. I'm not sure he has that many ways to actually win the game…"

Asked how they thought the overall match would turn out, nobody had a prediction. Gary predictably joked and said nothing useful whatsoever. After thinking some more, he suddenly pointed out "I'm hungry!" After a pause he pointed out: "Don't print that though, it may not be true when they read this."

I asked Cuneo what he thought, to which he responded, "Why are you asking me? I don't even know what colors my opponent is playing." 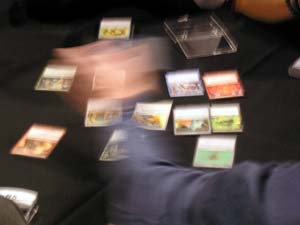 Moving over to the Japanese players during their deck building, it was clear all three were happy. Ikeda's blue/black did indeed have a number of nasty tricks, but also looked like it might have the needed muscle to convert all that card advantage into game advantage, including a Blasting Station that he was able to scoop up surprisingly late. Jin, who was paired up against Wise, had a great red/white deck featuring an outstanding aggressive curve as well as the dreaded Summoner's Bauble/Leonin Squire combo.

That left Ishida, who had a solid-looking green/black featuring the aforementioned Sword of Fire and Ice. When I asked what they thought of their draft, they smiled enthusiastically and indicated that they definitely liked their team's chances, either 2-1 or 3-0. They all felt that Ikeda's Skullclamp special was their best deck and should win its matchup, and the believed they could pick up at least one win, if not two, from the remaining matchups.