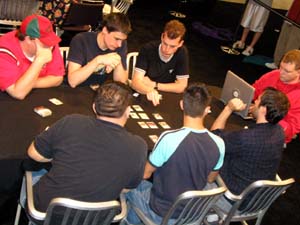 team Von Dutch boasts Dutch powerhouses with oodles of top 8 appearances between them. Jeroen Remie, Jelger Wiegersma, and Kamiel Cornelissen came into this match needing one more win to guarantee a spot on the final day. So far they were 3-0 in drafts using a strategy of having base-White in the middle seat (seat B), base-Green on the left (seat C), and Black/Red on the right (seat A).

Make Fetch Happen are a team of local Seattle Pros who finished sixth at Grand Prix: Washington D.C. They also came into this draft at 3-0 on the day, and are on a seven-match winning streak after starting the tournament 0-2. Their draft strategy on the day has been to put a base-Black deck on the right, base-Green with probable sunburst on the left, and W/U in the middle seat. Since they started out 0-2 though, their tiebreakers are awful, so a loss here would be a deathblow to their chances of making the final day.

To say it plainly, this draft went strangely for all parties involved, and it was all due to some odd color distributions in the Mirrodin packs. By the end of the first set of packs, Jeroen found himself stuck in Green on the right (when he would normally be B/R), Kamiel was pretty firmly in R/G, while Jelger was sticking mostly to plan, drafting a combination of White, Blue, and artifacts in the center. The Dutch didn't seem particularly comfortable about having two Green drafters, but at this point they were rather stuck and would need a very firm push to move their decks in a different direction.

Over on the other side, Make Fetch weren't doing much better. Pettinger in the C seat ended up with a series of Black cards early and shifted into B/G, while Seat B stuck to the plan and Seat A, who started off with two Pewter Golems, eventually shifted into W/R. Sometimes the packs reward flexibility, which is exactly what happened in Darksteel as make Fetch was able to capitalize on a series of strong White packs, including Pristine Angel for seat A. A pair of Essence Drains and an Echoing Decay also gave seat C some very strong removal in a seat where they originally were not going to play Black.

Darksteel helped the Dutch as well, as Jelger drafted two Arcbound Crushers, while Kamiel picked up two Panoptic Mirrors and two Echoing Ruins to go along with Blinding Beam and One Dozen Eyes from Darksteel.

Fifth Dawn yielded its little goodies for both teams, including a Devour in Shadow for Pettinger, Acquire for Thompson, and Cranial Plating for Goldman on Make Fetch, while Von Dutch picked up Moriok Rigger for Jeroen, a pair of Loxodon Anchorites for Bram and a Red Bringer, while Kamiel had to settle for a Furnace Whelp and some Cogs.

Jelger ended up with a solid U/W artifact deck, but felt his opponent's deck was probably a little better. They were definitely thrown off their draft strategy for this one, but said it was all due to the way the packs ran and not to some counter-strategy employed by their opponents. Kamiel was creature light, but had some solid fatties (two Tangle Golems, Fangren Hunter, One Dozen Eyes), and also had two Panoptic Mirrors with a host of sorceries and instants that his opponent had no way to remove. Jeroen's deck looked to be a bit of a hash, but his curve was solid, so he felt he still had a good chance to win.

Make Fetch Happen really felt their draft did not go well, once again due to the weird pack runs, and also due to the fact that they received for the first time all day. They were forced to abandon their planned strategy, but overall they said their decks definitely ended up stronger than expected, even after the deviation.

The B seat is about what they expected after the early packs. Seat C ended up a lot better than they thought, because we got a Devour and two Drains there.

In seat A, they started out with Pewter Golems, but had to adjust when their C seat took Consume Spirit, so they switched into White to improve the matchup against Green, since tappers are usually pretty good against Green's fat. But then they opened Pristine Angel, which they thought would probably be impossible for the opposition to deal with.

Neither team really gave a prediction for this match, as the odd packs early caused a lot of uncertainty among the players.