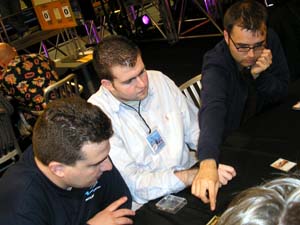 -timer Chris Pikula was staring at a chance to make Top 4 one more time. Chris hasn't made a top 8 in a long time -- Worlds 1998 in Seattle, to be precise. At one time, Igor Frayman had been called the best player to never make a Top 8 but times have changed. Josh Ravitz was the team member who played the most out of the three. He had done well in past team events, finishing ninth and 13th as well as a Top 8 finish at Grand Prix Detroit. For all three of The Max Fischer Players, this would be a big victory.

The Dutch team toernooicentrum.nl/faal (Snepvangers, Warmenhoven, Duerloo) were already out of contention for Top 4, but wanted to have a strong finish for the extra PT points and money. Bram Snepvangers is the only one of the three with any Top-8 finishes on his Magic resume. Didier Deurloo may be at the Pro Tour, but he hadn't even qualified for Dutch Nationals happening next week.

Ravitz kicked off for The Max Fischer Players and took a Bonesplitter, then Pikula went into red with Shatter. Snepvangers' team appeared to have a set strategy as there was not much argument about the division of colors. Pikula's pack contained Spikeshot Goblin, making it easy pick for the meddling mage. Snepvanger took a Talisman of Dominance, while Ruud Warmenhoven grabbed a Blinding Beam. Deurloo continued into green with a Tel-Jilad Chosen and Battlegrowth.

Frayman looked to be the affinity player for The Max Fischer Players when he grabbed a Thoughtcast. Snepvanger first picked Spikeshot, Warmenhoven took Taj-Nar Swordsmith and Deurloo took Solemn Simulacrum. Frayman went right for the Nim Shambler and Nim Shrieker, showing that he would be blue black.

When Warmenhoven opened up his first pack, Deurloo looked at the Molder Slug and went right for it. The only decision was which card Warmenhoven should take -- Slith Ascendant, Skyhunter Cub or Neurok Spy. Warmenhoven took the Spy, leaving the white cards. Pikula ended up with both the Slith Acendant and Skyhunter Cub as Snepvangers went for another Talisman.

Deurloo opened a Crystal Shard but didn't seem excited by it. After having just taken a Molder Slug the Shard would add a new color to his deck. Still, Crystal Shard is too powerful to let the other team get their hands on it, so Deurloo took the Shard and will certainly play it.

For toernooicentrum.nl/faal, Warmenhoven was going to end up playing white/red, Deurloo would be playing a base green deck and Snepvangers looked to be taking up the artifact and black cards. Pikula's team did not seem excited by their last pack of Mirrodin. Slith Bloodletter went to Frayman, Mirror Golem to Ravitz and Fangren Hunter to Pikula. All of those are fine cards, but not the bombs a team trying to make Top 4 really wanted to see.

Deurloo didn't open a powerful rare but the pack had a number of solid picks for the team. For the first time all draft the three Dutch visibly argued about which cards to draft. Their turmoil was brief, however, as Warmenhoven rubbed his hands together as he laid out Pristine Angel. The Max Fischer Players now looked confused and a little dejected as they took Vedalken Engineer, Emissary of Hope, and Echoing Decay. The Emissary would normally be a nice addition to Ravitz's deck, but when your opponent has just taken a 4/4 flyer with protection from everything, the 2/1 flyer just can't compete.

Snepvenger's pack gave his team another Leonin Bola. Pikula picked up Fangren Firstborn. Ravitz took a Barbed Lightning. Pikula opened Fireball and snapped it right into his pile of cards.

Ravitz's pack left The Max Fischer Players with some difficult decisions. Ravitz ended up taking the powerful Arcbound Crusher, leaving Frayman his third Echoing Decay of the draft. The blue reappeared in Warmenhoven's strategy as he picked up a late Spire Golem. Later Frayman would regret letting the Spire Golem go through his grasp.

As Fifth Dawn approached, the match between the two teams appeared to be very close. The Max Fischer Players had Fireball and Sword of Light and Shadow while toernooicentrum.nl/faal had Pristine Angel, Molder Slug and Crystal Shard.

Ravitz opened Vedalken Shackles, perhaps the best Fifth Dawn Limited card. Pikula got a Vulshok Sorcerer, but Warmenhoven's blue flyer collection grew with Qumulox. In the next pack, Pikula took another Sorcerer over the powerful Cranial Plating. Snepvengers took the leftover Plating, and with the number of artifacts he had the plate should be a lethal piece of equipment.

Snepvengers pack saw him first picking a Ouphe Vandal while Warmenhoven picked up Auriok Salvagers, Deurloo helped his mana a little further by grabbing Dawn's Reflection. For The Max Fischer Players Ravitz made out the best from the pack grabbing a Stasis Cocoon.

During Warmenhoven's last pack, a little confusion occurred when Deurloo picked out of order. The minor infraction was cleared up and he still got the card he wanted -- Magma Jet. The Jet would prove to be useful versus Pikula and his three Vulshok Sorcerers.

A second Auriok Scavenger was opened by toernooicentrum.nl/faal but Deurloo couldn't play it so instead he took Skyreach Manta. Ravitz got to take the Auriok Salvager from the pack and he was pleased. Ravitz had to forcibly make sure that his teammate Pikula didn't take the Energy Chamber on the way back. After the pack, he showed Pikula his deck to explain why he wanted the Chamber. Pikula just shrugged.

Pikula took a Rude Awakening out of Frayman's pack instead of his fourth Vulshok Sorcerer. Trinket Mages were a dime a dozen during this draft as well as Frayman picked up another to finish the draft. With two Auriok Salvagers and multiple Trinket Mages in the draft, may the team with the most cogs win.

"I can ping the hell out of people," said Pikula, eyeing his four red-damage creatures.

Frayman and Ravitz looked at Pikula's deck in awe, but Chris was worried about filling out his last few cards. Arcbound Workers were virtually vanilla 1/1's, as Chris only had Oxxida Golem to which to modular. Ravitz's deck was full of equipment but he had to be worried about Pristine Angel in his opponent's deck. Pikula was still searching for cards when he came across Inflame. Will he Inflame himself into his fourth final day?

For each of the three Echoing Decays that Frayman had, Bram had a Lose Hope to match. Deurloo's deck turned into a green sunburst deck. Sawtooth Thresher, Skyreach Manta and Opaline Bracers all worked the sunburst theme. Molder Slug works against the theme but is just too powerful a card to pass up. Had the Dutch realized that Pikula only had four artifacts in his whole deck, they may have opted to not play Molder Slug at all.