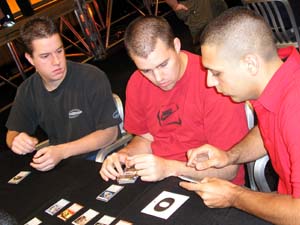 a draft strategy going into Day 2 can give a team enough of an advantage to put it over the top. With five rounds of drafting, the strategies that might seem best at the beginning of the day evolve as teams discover what the opposition is doing. Other teams don't wait around for evolution, and instead attempt to copy what the more successful teams have done

Dead Money (Radonjic, Lau, Thicke) decided that their plan would be to copy whatever strategy Phoenix Foundation (Blume, Baberowski, Budde) was using. When they found out that Phoenix Foundation didn't make Day 2, they were disappointed because they wouldn't be able to implement their plan. Dead Money joked around, saying that during the first draft they were going to only have two players draft while the third scouted other teams' strategies.

New Jersey was the hot spot for top teams to gather and develop strategies. Cosmic Tones for Mental Therapy (Cuneo, Harvey, Wise), Phoenix Foundation, The American Way (Krempels, Sonne, Fabiano), Von Dutch (Remie, Wiegersma, Cornelissen), Shenanigans (Lebedowicz, Sullivan, Horvath), and Truck Oasis (Lynn, Chadha, Vanderbeek), along with individuals from a number of other teams, assembled to practice the team draft format. With all of this talent in one location, no doubt some interesting strategies would emerge. The Dutch started to innovate when they decided to not have any player draft green whatsoever.

Ignoring a color totally can be a very risky strategy in a team draft format. If one team takes no green cards, the other team gets all of them. They felt justified in the no-green strategy because they couldn't manage to make their Green deck win during the draft. Other teams have come to similar conclusions about green being the weakest color but still try to work with it anyhow. Weird combinations, such as Green Affinity decks, emerge as one way to strengthen the power level of a team's decks.

Since only two players need to win to take the match, five-color strategies have become popular. In combination with the loads of mana fixing available in the format, having a player able to take away powerful bombs from the other team makes a five-color strategy even more useful.

Mirrodin block has many more artifacts than the average Magic format. With so many artifacts, teams are forced into making many more decisions than usual during the draft. Normally teams will just have to identify the best card in each color for each deck. With so many artifacts, however, teams are forced to decide which artifact belongs in each deck. Powerful equipment can be used in almost any archetype so properly dividing up each pack will be a challenge for today's competitors.

Something Amazing! (Heiss, Tamblyn, Wagener), being from all across the United States, weren't able to practice as a team and their strategy reflects this. They plan to team draft as individuals. While they will stay out of each other's way during the draft, they don't even have signals worked out. During the draft, Heiss opened his pack and took Blinding Beam, and then he signaled to Tamblyn to hate draft the Leonin Sun Standard left in the pack. When Tamblyn ignored Heiss and instead drafted a Myr Enforcer, Heiss shrunk in agony.

Starting Day 2, the only undefeated team left in the tournament was S.A.I. (Shimura, Ibamoto, Arita). Their strategy involved having a white player, green with artifact, and a blue/black deck. Their opponents -- Cosmic Tones for Mental Therapy (Cuneo, Harvey, Wise) -- were playing a more red-based Affinity, white in the middle, and a black/green deck on the right. Wise was fighting for his fourth team Top 4 finish, and with the Cosmic Tones sitting in second place after the first day he was on the right track.