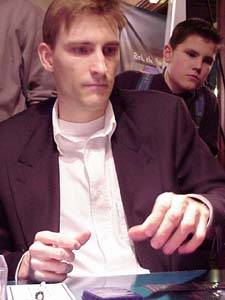 the first time since 1998, the Pro Tour has returned to the city of Seattle. Though it's been a while since the Emerald City hosted the tour, it was originally the ultimate destination for Magic competitors, as it was the location of the World Championships from 1995 to 1998. Here's a stroll down memory lane to see what past action has taken place in Seattle.

The second World Championship of Magic, this was the first to be held in the Seattle area and it occurred at the Red Lion. In a famous battle for the title, Swiss player Alexander Blumke defeated Mark Hernandez of France, giving France its second runner-up finish in two years (Bertrand Lestree had lost to American Zak Dolan the previous year). Bertrand would later go on to make second place at the first Pro Tour (PT New York). Speaking of blasts from the past, take a look at the champion's Type 2 deck from that year: 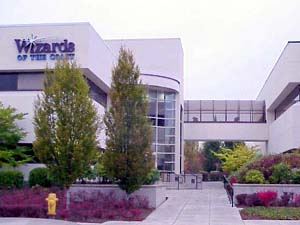 This was the only event to ever be held specifically at the Wizards of the Coast offices. (The event played out on the second floor of the south building, an area now occupied by the CEO offices and meeting rooms.) It's also notable that fully half of the 1996 top 8 also showed up in some form or another for this year's event. Henry Stern, Matt Place and myself are all Wizards of the Coast employees now, and Tommi Hovi is here this weekend as a competitor. Note also that this was Jon Finkel's Pro Tour debut after leaving the junior tour. Finkel placed an impressive ninth. Going a bit further down the standings that year, we see the former World Champion Alexander Blumke in the top 16, and next World Champion Jakub Slemr at 18th place.

Unquestionably the most important story from this event, however, occurred in the finals between American superstar Mark Justice and Australian unknown Tom Chanpheng. Justice was piloting the feared Necropotence deck against Chanpheng's metagamed White Weenie strategy. The crucial play came when Chanpheng blew up all the lands at a critical stage of the game. Justice thought long and hard, then tapped two Swamps in response and buried his lands. Using the two floating mana, he declared a Demonic Consultation for Dark Ritual, and then in a move that stunned the crowd he immediately declared a second Consultation for Dark Ritual as well.

Holding just a Swamp and an Ihsan's Shade in hand, he felt that a turn-two Shade was his best bet. Unfortunately for him the pair of Consultations milled away all the remaining lands in his deck, leaving him with Ritual/Ritual/Shade/Swamp but no land left in his deck to ever cast the six-casting-cost monster. The crazy thing was that Justice could have just cast the first Consult and then waited to see how damaging it was to his deck before deciding what (if anything!) to seek for the second card. The famed "double Consult" would go down in history as one of the greatest blunders of final-day play. 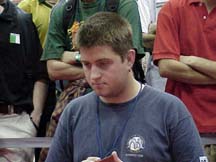 Held at the Wizards of the Coast tournament center and won by Czech player Jakub Slemr (playing "5 Color Black"), the story of this event was Jeff Donais. He began the tournament with a 7-0 record on day 1, but managed to lose every single match in day 2, going 0-7 with his Extended deck and dropping from first place to way out of contention for the final day of competition. His deck featured Sol'kanar the Swamp King, an otherwise great five-casting-cost fatty that had the unfortunate distinction of being easily killable by 3 different commonly seen one-casting-cost spells (Swords to Plowshares, Pyroblast, and Hydroblast). The great 0-7 choke remains one of the most memorable collapses in Magic history.

Held at the University of Washington, this event was won by then-newcomer Brian Selden. Amazingly, despite this event occurring six years ago, six of that year's top 8 are here this weekend as well -- myself and Alan Comer from Wizards of the Coast, plus competitors Ben Rubin, Jon Finkel (his first Worlds top 8), Chris Pikula, and Raphael Levy. 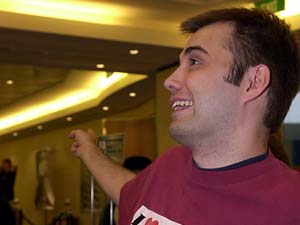 One of my fondest memories from this event was when I was in the audience for the finals match between the youngsters Selden (with Recurring/Survival) and Rubin (with the Tempest-based version of the Sligh deck). Brian Weissman and Chris Pikula were doing the commentary for the match, which you could listen in on from the audience by using headphones that were provided.

The first time Selden had the chance to pull off the Recurring Nightmare/Survival of the Fittest combo the commentators were shocked that he went for Verdant Force first, rather than the usual play of getting Staunch Defenders to provide some extra life buffer against the formidable array of burn packed by the red deck. A surprised Chris Pikula joked that the little kids love their gigantic fatties, and that riff continued next turn when Selden searched out his Spirit of the Night and combo'ed it into play.

This same thing happened several times during the match, and every time the commentators chimed in, joking about little kids and their fatties. Poor Rubin and Selden were up on stage with no clue whatsoever why the audience kept laughing so hard. The best laugh came at a point where Selden had both Spirit of the Night and Verdant Force in his graveyard. Chris Pikula asked Brian Weisman "you know, I wonder what Spirit of the Night and Verdant Force talk about when they hang out together?" Pikula then went on to simulate such a conversation, and the crowd completely lost it. I've always loved watching the final day of Pro Tour competition, but this event was easily the funniest commentary I remember in however many years I've been doing this now.

And now it's 2004. Many of the names above are still here, competing against the new generations of great players. As with any other event, there are all kinds of great stories unfolding -- but it might be a few years from now until we'll have the best idea which ones mattered most. If you're like me, you'll be there Sunday watching the live webcast, listening to the commentary, and eating up all the great new stories coming out of the Pro Tour's latest trip to Seattle.