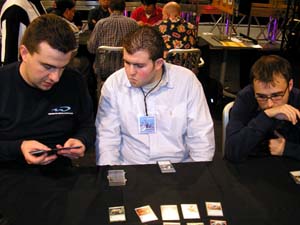 wisdom suggests that to succeed in a Pro Tour event, you need to have the backing of a large team. Usually that team is so big that it tends to be spread out over large regions. Because of the Internet, this usually isn't a problem for large teams to prepare but the Team Rochester format is unique.

This leads to mercenary teams coming together, either out of old friendships or PT point necessity. Teams made up of players in the same region have an advantage of being close enough so that they can get numerous practice drafts in, and get them in earlier than the day before the event starts. Some Pro Tour teams are fortunate enough to fit into both categories.

The Brockafellers (William Jensen, Matt Linde, Brock Parker) are roommates, although it is debatable that they take advantage of this fact. Members of one team -- toernooicentrum.nl/faal (Bram Snepvangers, Ruud Warmenhoven, Didier Deurloo) -- live in the same country (Holland) but don't get to practice with each other much at all. They explained that although they live relatively close to one another, transportation is a problem.

The Max Fischer Players (Igor Frayman, Joshua Ravitz, Chris Pikula) all live in New York. They felt that being able to practice together makes a huge difference. Earlier in his career, Frayman teamed with Gab Tsang and Brian Hacker but they never got to practice much together, because Frayman and Hacker lived on the West Coast while Tsang lived in the Toronto area. Ravitz commented that only New York and New Jersey players put in enough practice to succeed at Team Pro Tour events. Ravitz said that the foreigners would dominate if they put in the same level of practice as the Northeast players.

When I replied that two Japanese teams were at the top of the standings Pikula replied, "No, no, the Japanese aren't foreigners…they are foreign foreigners."

Gary Wise has been a mercenary for almost his entire Pro Tour career. He has three Top 4's in team formats, but never with the same team. He hasn't even lived in the same city as a single other teammate. While he will get together for a playtest session before the event, it is rare for him to have practiced more than a handful of drafts before a team event. After a strong start this year, Cosmic Tones for Mental Therapy have lost to two Japanese teams but still has an outside chance of making Top 4.

Toronto-based team Pocket Rockets (Paul Russell, Joseph Derro, Matthew Wood) have placed themselves into Top-4 contention with a 7-2 record. They live only five minutes away from one another, which helped matters greatly. They said that being close allowed them to practice a good amount of Sealed Deck.

Occasionally, a team that appears to be a PTQ team that should be regional turns out actually to be a mercenary team. :B (Tim Aten, Gadiel Szleifer, John Pelcak) come from three different states (Ohio, Illinois and Minnesota). They got together for Grand Prix Washington, D.C. and qualified there, but haven't been able to practice since. 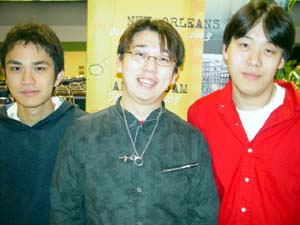 One totally mercenary team is Finding Jaba (Diego Ostrovich, Carlos Romao, Frank Karsten). Karsten lives in Europe, while his teammates come from South America. All three were looking for a PT Point team in Kobe so they decided to start working with one another. The lack of practice caught up to them on Day 2, as they only have 15 points after nine rounds of play.

Which way is the best way to go? With two Japanese teams leading the way it seems that being able to practice with your teammates still makes more of a difference than sheer talent, but PT Seattle isn't over yet -- so anything could still happen.