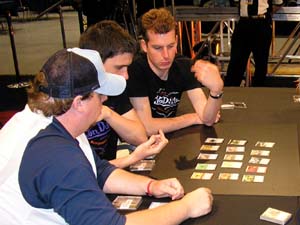 final draft of the Pro Tour had all of the excitement a final deserves. The Japanese team of www.shop-fireball.com2 (Ishida, Ikeda, Okamoto) won the flip and chose to open the first pack instead of letting the Von Dutch (Cornelissen, Wiegersma, Remie) go first. Had they seen the packs in advance, they may have decided otherwise.

Unlike last draft, this time the Dutch tried to figure out how to place the cards before the pack arrived to them. However, once the pack did arrive they chose the same color combinations as in the semifinals. Running the same strategy two drafts in a row can be dangerous, especially if www.shop-fireball.com2 were watching what strategy the Dutch used to beat the Canadians.

Shrapnel Blast or Empyrial Plate? With these two on the table from the second pack, the Japanese were forced into a difficult decision. Jin Okamoto took the Shrapnel Blast, leaving Jelger Wiegersma the chance to pick up the Empyrial Plate for his white deck. Isochron Scepter also worked its way back to Jeroen Remie. The Scepter can single-handedly win games when left unchecked. Much like the Panoptic Mirror that Nicolai Herzog used to win Pro Tour San Diego, if Remie gets the right cards the Scepter could make him Pro Tour champion.

Remie opened up a goodie in the next pack, an Electrostatic Bolt to imprint into the Scepter. Wiegersma and Kamiel Cornelissen recognized the power of artifact kill when they took Viridian Shaman and Glissa, Sunseeker, respectively.

The Japanese appeared to have set up the mirror match by setting Tsyoshi Ikeda into white with Skyhunter Patrol and Bonesplitter. Wiergersma's pack contained an Oblivion Stone, which Cornelissen took. Ikeda took a Terror, showing the his team's willingness to go into white/black. Very few other teams have considered white with black, but multiple times the Japanese have built white/black decks.

These Mirrodin packs have been some of the best seen all weekend. Grab the Reins and Electrostatic Bolt came out of Cornelissen's Mirrodin pack. Itaru Ishida drafted slow and steady. He had shifted away from the white deck he used in the semis to a blue-based deck that relied on the affinity mechanic.

Any of the three players could have taken the Mask of Memory opened by the Japanese. Since Aether Spellbomb was the next-best black or blue card, the mask went to Ishida. He may struggle to keep his creatures alive, but if the Mask hits Remie, then game over.

Darksteel saw the Dutch taking Razor Golem over Stir the Pride. This was a shocking pick. Even though Razor Golem is a solid creature, passing Overrun and Spirit Link combined into one card must be hard to do.

Draft strategies often shift when the power level of the cards in the draft increases. The decks that have bombs must be able to find the best ways to use them, while the decks without the big cards struggle to find a way to win.

The Japanese were more animated this draft than during their match versus S.A.I. They were excited when Rebuking Ceremony fell into their lap. Each team was forced to make close decisions every pack. When Wiegersma took Arcbound Crusher and Remie Echoing Decay, Okamoto received Savage Beating.

With Ikeda having Stir the Pride and Jin having Savage Beating the Dutch will struggle if their games go much past turns six or seven.

The Juggernaut moved into the lead of Top 4 appearances when he was opened for the fifth time in the three Top 4 drafts. This passes Cornelissen who has only four Top 4s. Juggernaut must attack.

Do you ever wonder if the top teams rare draft in the Top 4? Remie picked up and read Scrounge, preventing the Japanese from getting it last.

The Japanese passed Pulse of the Fields in favor of Loxodon Mystic. Of course they are in the finals of the Pro Tour, so you would hope that they know what they are doing. Wiegersma was delighted to get the infinite life-gain card for his deck.

Fifth Dawn once again saw Cornelissen going into sunburst. Ishida picked up Vedalken Mastermind. The card can be very powerful in the right deck and his future picks might try to accomplish that sort of deck.

Okamoto going green was rewarded as he opened Tornado Elemental. Cornelissen kept up with his sunburst strategy but Ishida prevented him from getting a second Opaline Bracers. Hate drafting to manipulate matches was a bigger part of the Japanese plan in this draft. Multiple times they have deliberately stopped the Dutch from grabbing the card they really wanted. 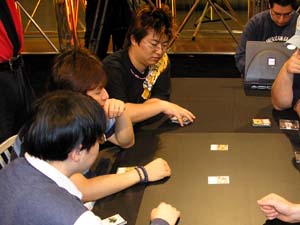 When Remie opened his pack, however, the Japanese could do nothing about the cards the Dutch received. Remie helped out his black/red deck with Cranial Plating; Wiegersma grabbed the efficient Loxodon Anchorite for the mirror. With only a few packs left, it seemed unlikely that the Scepter would end up in Remie's deck.

Magic players worldwide made the rare that Wiegersma opened, Crucible of Worlds. The Crucible really isn't a Limited card, however, as it went close to last. Wiegersma instead took Cranial Plating while Cornelissen took Magma Jet. Remie picks up another instant, Lose Hope, to help out his scepter. Okamoto grabbed the underrated Baton of Courage from the pack as well. The Baton has risen steadily in value since the release of Fifth Dawn. Some players now consider it as strong as Infused Arrows.

Ishida added a Sawtooth Thresher to his pile and may end up playing sunburst. When he opened Skyreach Manta, the transition into sunburst was complete. Every time he took a card away from Cornelissen, Ishida was actually adding it to his deck instead of just denying Cornelissen.

This is the second draft in a row that the Japanese used Ishida to mirror his opponent on the right. Against S.A.I., he played white because the player on his right was white, and now against the Dutch he counter-drafted Cornelissen into a sunburst deck of his own.