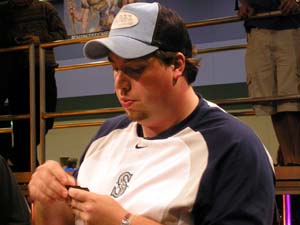 Jeroen Remie sat down for his match, he patted down his pocket and found a toothpick. When asked if he was paying homage to Neil Reeves, he grunted, "I am a big fan of Neil Reeves but I am honoring myself. I have been doing this for a long time now."

Remie was playing a nearly mono-red deck. He left cards such as Chittering Rats in the board to get maximum efficiency out of his Slith Firewalker and two Oxidda Golems. He is just touching black for Terror, Echoing Decay, and Lose Hope. These are just a few of the spells he can imprint on his Isochron Scepter -- a card he anticipated would be very good in this matchup.

During deck construction, Justin Gary looked at the cards in Ishida's deck and declared, "If he wins this match, he will become my new Magic hero." Ishida has been playing this game longer than his boyish looks would indicate. As if to make up for his youthful appearance, Ishida rarely smiles while playing a match. His deck was a five-color Affinity deck that absorbed many of the cards that appeared destined for Kamiel's deck.

This was the first time these two had ever faced off.

Remie began the match by extending his hand to offer his opponent good luck. Ishida accepted the hand. He is not as outwardly gracious as many of the other Japanese players. I would call him polite, bordering on brusque.

Goblin Brawlers were the first play of the match and Ishida came back with the commentary-mocked Quadropod. Juggernaut came down for the Dutch player and he got to do five with it when Ishida played Advanced Hoverguard.

Remie followed up with a Gold Myr and Blind Creeper. Ishida took out the creeper with a trio of spells. He Trinket Maged for Arcbound Worker and played it. Mask of Memory finished it off. Jeroen was contractually obligated to send in the Juggernaut and it only made the Pod bigger when he chumped with the Worker. Rustmouth Ogre hit the board post attack.

Ishida equipped his flyer and attacked for two and a pair of cards. He played a land but had no play. Jeroen sent everyone into the red zone. Ishida blocked the Brawler with Pod, Gold Myr with Trinket Mage and bounced Rustmouth Ogre with Echoing Truth. Jeroen caused the Trinket Mage to Lose Hope and pushed a Brawler and land to the bottom. Ishida fell to 10 and he replayed the Rustmouth.

Tree of Tales allowed Ishida to Irradiate the Rustmouth and he attacked for two and two cards. Jeroen rolled his eyes at Ishida's Myr Enforcer. "This is getting annoying," he said, shrugged, and traded his Juggernaut for Enforcer. He played an Oxidda Golem after combat.

Jeroen could not keep up with the equipped Hoverguard and drew Cranial Plating with only a Brawlers in sight. He looked over at the matches hoping to like what he saw and scooped the first game.

"Jelger?" Wiergesma gave him the thumbs up as he won the first game. When Jelger inquired as to how Jeroen was doing he sighed, "Mask of Memory on untargetable flyer." 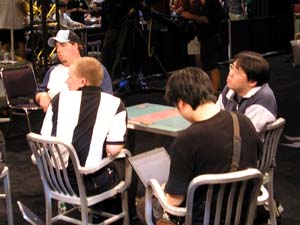 Jelger nodded sympathetically as a touch of sweat began to bead on Remie's temples. He craned his neck to get a read on Kamiel's match. All he could see was a hand full of good stuff in Jin's grip -- two Electrostatic Bolts, Tornado Elemental, and Mirror Golem.

When Jin played the Mirror Golem and drew into Shrapnel Blast, Jeroen shook his head, "Kamiel is not winning that one." Things looked great for Jelger in Game 2 -- he led off with Squire and Razor Golem turns two and three while his opponent missed a land drop. "I need him to win with me losing that game."

Meanwhile Ishida was his usual unflappable self. He would occasionally fuss with his glasses or shift in his seat to keep the blood flowing but mostly he just sat placidly with his hands behind his head while they waited for the signal to play from the spotter.

Jeroen kept a four-land hand and made the first play with Alpha Myr. Ishida kept a hand with mana and spells but no creatures and had to absorb some damage from the Myr and Jeroen reinforced with a Brawlers (he had yet to draw any of his haste guys).

He attacked for four into an empty Ishida board and played a Blind Creeper. Ishida managed a Quadropod for the fourth turn. Jeroen kept up the pressure and sent everyone in. When the Quadropod stepped in the way of the Creeper, the Dutch player tried to kill it with Echoing Decay but Ishida saved it with a free Scale of Chiss-Goria.

Ishida found a way to clog up the ground with Nuisance Engine, and when Jeroen put out a Juggernaut he took it out with Essence Drain and climbed to 13, negating some of the early damage he took. Things looked up for the Dutch when he found a Cranial Plating and promptly equipped his Creeper and attacked. Ishida put his Advanced Hoverguard in the path of it and they traded.

Ishida played a Wizard Replica. Jeroen had no good attacks and played a Clockwork Condor and moved the plating. Ishida had some equipment of his own -- Opaline Bracers for three -- and equipped Wizard Replica.

Jeroen played a Talisman, which gave him double black to move the Plating at instant speed and attacked with his Alpha Myr and Gold Myr. He moved the equipment to take out the blocking Quadropod.

Ishida played Vedalken Mastermind and left all of his men back. Jeroen played Slith Firewalker and attacked with everything. Ishida put a token in the way of a Myr, the Replica in the way of the Condor, and Mastermind in front of the Slith. Echoing Truth bounced the Plating and the Condor was consumed by the Replica.

Jeroen replayed the Plating but there was a growing supply of tokens to clog up the ground, and with his Condor gone he could not fight his way through. Ishida on the other hand was bashing for four in the air with his Replica. He fortified a turn later with an Arcbound Bruiser. 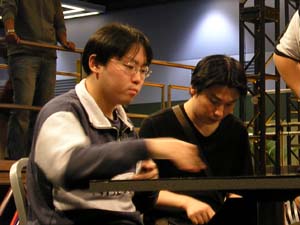 Jeroen could find no way to attack. Ishida swung in with the Bruiser and the Replica, and the Dutch player fell to 8. Next turn he had to block the Bruiser with the plated Myr and dropped to 4. The counters went onto the flyer and Jeroen had one draw to find an answer. He cast Lose Hope on a token in search of some of his own. He pushed both cards to the bottom of his deck and tried to peel an answer.

He drew an Isochron Scepter that offered him no assistance. He shook Ishida's hand and slumped across the table in defeat.