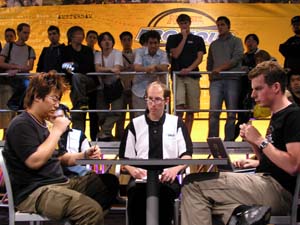 is it, the showdown for the C chair. This match featured two great players -- Jin Okamoto has a second place from Worlds 2003, and Kamiel Cornelissen has two second place PT finishes (back-to-back events at L.A. and Chicago from the 2000-2001 season). So in addition to the team title being on the line, one of these guys is walking away a champion at last.

These players had actually faced each other once before, at the World Championships in Toronto, Canada, where Jin's Oath deck prevailed over Kamiel's White Weenie deck. Portent of things to come? Let's find out!

Kamiel won the roll and would be on the play. He faced an interesting choice right off the bat, as his opening hand was double Forest, double Island, Arrest, Infused Arrows, and Stand Together. Some good spells, but no creatures and no white mana for the Arrest. Kamiel spent plenty of time making his decision, but in the end thought this one was a keeper.

Wizard Replica from Jin was the first creature onto the table followed by a Goblin War Wagon (without any blue mana in his deck, of course). On turn 4, with GGUU in play, the best Kamiel could do was play the Silver Myr he'd just drawn. Jin jut untapped his Wagon and swung with it and his Replica, passing the turn.

Kamiel's turn saw him tap out for Arcbound Wanderer, but again with just two counters. Wagon and Replica continued to swing in but still nothing else had happened on Jin's side of the table. Qumulox came down on Kamiel's side, and the rest of the team swung in for 3. On his next turn Jin at last had some gas, dropping a painful Rebuking Ceremony on Kamiel's two artifact creatures. However, that still left the flying fatty Qumulox in play. Kamiel swung in, then replayed his Myr and also added an Infused Arrows for three to his board, giving him a commanding position, not to mention he'd be re-drawing his Arcbound Wanderer next turn and this time he'd have access to three colors to power it up. In the meantime, word came in from the A table that Remie had dropped his first game.

Jin swung in with everything, making it Kamiel 7, Jin 12. Jin followed up by shooting the Qumulox out of the sky with double Electrostatic Bolt. Kamiel's turn saw the return of Arcbound Wanderer to his hand (what a topdeck!) and predictably it came back into play, a new-and-improved model now sporting three counters. Jin swung in yet again, knocking Kamiel to a precarious 6 life, then dropped out an impressive Mirror Golem imprinted on the Qumulox, but it got a lot less impressive when Kamiel slapped his Arrest on it. 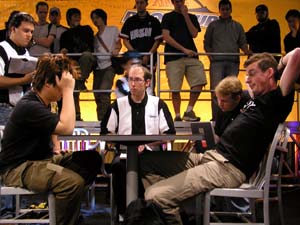 During a very long turn for both players, the results from the table B came in: Jelger Wiegersma had swept his opponent 2-0 to give the Dutch a 1-0 lead in matches. Jin thought long and very hard, and eventually decided to untap his Wagon, which immediately went into the red zone. Silver Myr boldly stepped in front, and Kamiel at last got to cast the Stand Together he'd been trying to set up since before Jin's Rebuking ceremony.

But somehow, Jin still wasn't done. He cast Krark-Clan Ogre, which, with the help of a two-counter Baton of Courage, managed to trade with the super-sized Arcbound Wanderer after a Shrapnel Blast aimed at it was countered by Condescend. Jin had even more gas, playing out a menacing Tornado Elemental. In desperation, Kamiel pointed his last card at Jin, a Magma Jet, dropping his opponent to 1 and looking for anything to pull that last point of damage out or deal with the Elemental. The scry for two revealed double land, which promptly went to the bottom of the deck. Kamiel drew his last card, a Tangle Golem, and perished next turn when the Tornado Elemental charged in and Jin wisely chose to have it deal its damage to Kamiel rather than to the Golem blocking it. In what can only be described as an amazing comeback, Jin had managed to pull an incredibly difficult game off despite a terribly slow start against a deck chock full of monstrously powerful cards.

Jin took a very long time before deciding to keep his initial hand, and the reason became clear when he missed his third land drop, discarding Goblin War Wagon. A Krark-Clan Ogre followed it into the discard pile on the next turn. Jin was in dire straits, as Kamiel had the power and pressure to punish Jin's misfortune, dropping out Tel-Jilad Outrider, Neurok Prodigy, and Arcbound Wanderer with 4 counters.

Jin managed to find his third land (a third Mountain) and played out his Wizard Replica. On his next turn, still on three land, he incredibly managed to stabilize the board by casting Electrostatic Bolt at the Outrider and Echoing Ruin on the Arcbound Wanderer. Unfortunately for him, an Oblivion Stone from Kamiel meant Jin would need to find some way to pressure Kamiel into blowing up the stone without overextending to the point where the Stone would finish him.

Applause from the audience made it clear that Ishida had just taken his match 2-0, so it was all coming down to this match to see who was going home with the $60,000 check. 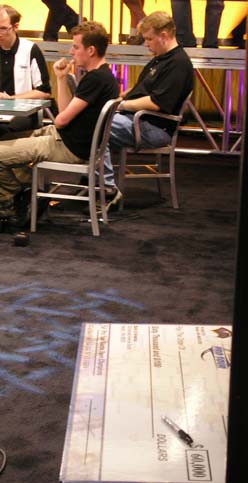 Several turns later, somehow Jin was still stuck on those same three Mountains, but the result of that was plenty of spells to play with. By the time Jin's third creature hit the table, Kamiel (who was holding little other than land at this point) was forced to blow the Oblivion Stone, leaving just his Neurok Prodigy in play. At last Okamoto found some green mana to keep casting his flood of creatures and suddenly the game was swinging around. With plenty of life on each side of the table and a grip of cards for Jin, now somehow Kamiel was the one struggling to pull out the win in this game. Things got even worse for him next turn when a Tangle Spider ambushed his Neurok Prodigy. Kamiel had Glissa to follow up, but the legend was demolished in combat by a Charging Courage. A third creature on Jin's side to Kamiel's zero creatures meant things were getting desperate. At last, however, Kamiel managed to find his Grab the Reins, wiping out Jin's two best creatures and leaving just a Thermal Navigator in play on the Japanese player's team.

Or, at least, that was how it looked like it was going to turn out while Jin considered his options. Since the second creature was going to die anyway, Jin sacrificed it to Shrapnel Blast to direct 5 damage at Kamiel's face, making the life totals Kamiel 2, Jin 8.

Kamiel had no choice but to use his Arrest on Jin's remaining creature. The game continued to swing wildly back and forth as Jin went for Mirror Golem but Kamiel had the Condescend, scrying his way into Sawtooth Thresher (which stayed on top) and Echoing Ruin (which went to the bottom). Thresher came into play with 4 counters on it, and now the burden was back on Jin to find a way to survive the next turn using the two cards he had left.

And he did have the answer! Rebuking Ceremony was cast on the Thresher as well as his own Arrested Thermal Navigator, allowing him to gain back the turn and play out a blocker if he needed it. But this one was not to be, as Kamiel had Infused Arrows to remove the blocker and swing in for fatal damage.

With two phenomenal games behind them, this was it -- one game to decide the Pro Tour title. Jin had managed to put up an amazing fight so far against what many had considered an absolutely insane deck on Kamiel's side. Even more incredibly, Jin had done so with two starts that could only have been described as mediocre at best. What would happen if Jin got the kind of opening draw he knew his deck was capable of?

Kamiel's opening hand had just two land (a Forest and Island) plus some very expensive spells, such as Qumulox and Arcbound Wanderer. He decided to keep the hand. He would be drawing first, and surely the Glissa in his hand influenced his decision as well.

Jin had a much quicker start at last, opening with a Copper Myr followed by Arcbound Stinger. Kamiel found his third land in time, allowing him to play his Neurok Transmuter, which Jin answered with Myr Quadropod. Kamiel found a Mountain for turn four, allowing him to cast a three-counter Infused Arrows. One of those counters then promptly sent Copper Myr to the dumper. Both players had mana, Jin had his aggressive draw, and Kamiel's deck was allowing him to play the slow, developing game. So far, both players were getting to develop according to plan.

Kamiel didn't find his fifth land for his fifth turn, but did manage to draw a Wayfarer's Bauble for later. For now, it was time to send Glissa into the fray and see how things turned out. Jin was still the aggressor though, playing out a Mirror Golem, imprinting his own Myr Quadropod (which had traded with Kamiel's Transmuter the turn before).

At this point, Kamiel was sitting on five juicy cards in hand to Jin's two, and with a board that was arguably at least as strong. When he added a 4/4 Arcbound Wanderer, there was no question who was winning in the current board position.

Mirror Golem and Glissa began trading hits, and Jin had the Echoing Ruin to take out the Wanderer. But Kamiel's hand at this point seemed overwhelming despite his slight lag in life totals. He began by playing out an Oblivion Stone, leaving open four mana for Condescend if needed.

Jin had nothing, however, so Kamiel was able to put a fate counter on Glissa. On Jin's next attack, the stone blew up the world except for Glissa and Jin's potentially game-winning Tornado Elemental ran straight into Kamiel's Condescend. Kamiel sent his Glissa in for yet another three damage, then added a Qumulox to the table to make Jin's position look unwinnable -- never mind the Stand Together Kamiel had just scryed his way into. 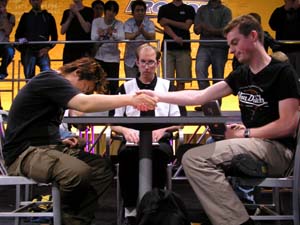 On Kamiel's next turn he drew the dreaded Grab the Reigns, leaving him a ridiculous number of ways to put Jin all the way out. He opted to Glissa Jin's chump blocker and then cast Stand Together on his monsters, sending Qumulox in for all but the last point, which was taken care of handily by a Magma Jet. A great, exciting ending for what can only be described as an amazing battle!