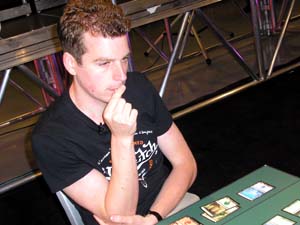 matchup between long-time pros and a Canadian Cinderella story almost didn't happen. If Chris Pikula of The Max Fischer Players had made the correct play with Inflame on the last round on Saturday, his team would probably have knocked Pocket Rockets out of contention. But that didn't happen, and now Matt Wood, a 25-year-old amateur from Toronto, is sitting across from Kamiel Cornelissen, a 23-year-old Dutchie who is now participating in his fourth Pro Tour Sunday.

The deck matchup between these two suggested an interesting matchup, as Kamiel is playing a five-color Green deck with a lot of spell power but few hefty creatures, while Wood drafted a more speedy R/B deck with solid removal and some evasion. Kamiel's strategy was all about getting acceleration early (and keeping it around), but if Wood could benefit from getting down an early creature and a removal-heavy draw, the Dutchman might be in for a load of trouble.

Prior to the match, Jeroen got Kamiel's attention and shook his fist at him, trying to pump up his teammates.

Both players resolved mulligans and waited for the okay to start. Forest, Island, Sylvok Explorer, Wayfarer's Bauble, Psychic Overload, Skyreach Manta, and Looming Hoverguard comprised Kamiel's opening hand. He played a first-turn Wayfarer's Bauble followed by a Sylvok Explorer, while Wood cast Guardian Idol, and then his Chittering Rats set Kamiel's hand back by a turn. The Rats drew first blood, hitting Kamiel for three after being enhanced by a Tooth of Chiss-Goria.

The action was quicker elsewhere, as Jeroen Remie was up a game after a turn-four victory over Paul Russell.

A 4/4 Skyreach Manta from Kamiel wasn't enough to deter the Rats from swinging again, equipped this time by an Ensouled Scimitar. Kamiel attempted to race with the Manta, but saw his attack blunted as Wood simply turned the Scimitar into a creature and blocked. Tel-Jilad Wolf and Vedalken Engineer joined the Dutch squad, but Kamiel dropped to 9 when he again couldn't find an efficient blocker for the 4/7 rodents. Psychic Overload ensured the Rats would stay tapped, but Wood was undeterred and activated his Idol, equipped it with the Scimitar, and tossed him into the red zone. That ploy forced Kamiel to chump-block with the Engineer.

Looming Hoverguard put the Scimitar back on top of Wood's library, and this time the Dutchman got in there to smack Wood for 6. The Idol attacked again, this time without help from the Scimitar, and traded with Kamiel's fresh Hoverguard. Wood then cast the Scimitar again and passed the turn. Kamiel attacked with the Wolf and the Manta, and bounced the Scimitar back to Wood's hand after he turned it into a creature, dropping the Canadian to 6, and then played Tel-Jilad Outrider. Wood drew his card, thought for a while, and frowned, scooping his cards up and starting to shuffle for game 2. 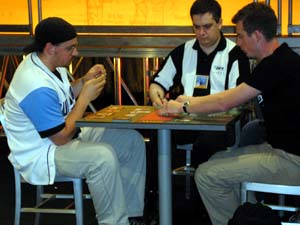 About the time Wood was frowning, Jelger Wiegersma took his game 1 over Joe Derro as well, giving Von Dutch a one game lead in all three matches.

Kamiel looked long and hard at a hand of Crystal Shard, Pyrite Spellbomb, Echoing Truth, Relic Barrier, Thirst for Knowledge, and Ouphe Vandals plus an Island before choosing to keep and plucking a land off the top of his deck, just like a former champion. Pyrite Spellbomb was cycled in search of a third, and found a Mirrodin's Core. Wood's board of Krark-Clan Stoker and an oh-so-fresh Scavaging Scarab looked good -- until Kamiel drew his fourth land and cast Crystal Shard, bouncing the Scarab back to Wood's hand. Detonate on the Shard made certain that wouldn't happen again.

Yotian Soldier stopped the Stoker beatings that had dropped Kamiel to 13 thus far. Thirst for Knowledge from Kamiel drew him three more cards, as he kept a Forest and the Wolf he had drawn, and threw away Vedalken Engineer plus Journey to Discovery. Yotian Soldier died when Wood attacked with the Scarab, the Soldier blocked, and a hasty Vulshok Sorceror finished the tin man. Wood then sacrificed the Guardian Idol his opponent had tapped down all game with Relic Barrier to cast Cackling Imp.

Goblin Brawler and Spikeshot Goblin further increased Kamiel's difficulties, and the next attack brought him down to 7. Tel-Jilad Chosen merely turned into a bodyguard for the turn, catching one to the chest from the thug Spikeshot, and the game ended a turn later when Kamiel drew a Bauble instead of anything useful.

As the players changed tables for the coverage, Paul finished off Jeroen Remie, evening the entire match at one a piece. As he was walking past, Wood asked the result of Paul's match, who told him he had won and suggested, "Don't choke, Matt!"

"Don't choke? How is that helpful? This I my first Pro Tour and he's telling me not to choke..."

"I'm just happy to be here. Like, you know… whatever."

In the other matchup, Derro tied up with Wiegersma to make for a pressure-packed Game 3. 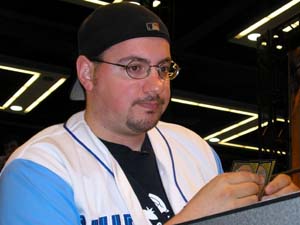 An opening hand of Pentad Prism, Crystal Shard, Sylvok Explorer, Yotian Soldier, Ouphe Vandals, and two Forests greeted Kamiel this time, while Wood thought long and hard about his hand before choosing to mulligan. The second six were clearly better, and they were off. Kamiel stalled at two land early, but Sylvok Explorer helped remedy that a bit, and a turn 3 Ouphe Vandals hit for two, only to be followed up by a very hefty turn 3 Tangle Golem, eliciting a "wow" and a roll of the eyes from Wood.

A Juggernaut from Wood actually represented a strong blocker (which is rare for a 5/3 creature that must attack each turn), but Kamiel had an Electrostatic Bolt primed and ready and swung for 8, dropping Wood to 10. Dross Crocodile leapt in the way of the Golem this time, but the Crystal Shard that Kamiel had just plaed made that merely a chump block as well. Dragon Whelp from Wood again provided a reasonable blocker, but the situation was fast approaching overwhelming for Wood. Kamiel hit in for two more with his Vandals and recast theTangle Golem.

"Oookay, gimme something," said Wood, as he tapped his deck, drew a card, and raised his eyebrows at what he saw before playing an Iron Myr and passing the turn. Unfortunately for Wood, Kamiel tapped the Myr at the end of Wood's turn with Relic Barrier, played Psychic Overload on the Whelp during his own turn, and swung with his team. As Wood extended his hand, he flipped over Barbed Lightning, which would have gone a long way toward evening the board, provided the Whelp was still available to block.

And with that, Von Dutch are in the finals!