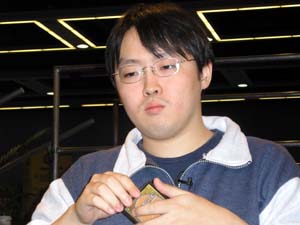 never made a Day 3 Team appearance before, Japan's Magic community took a giant step forward at Pro Tour Seattle as one was guaranteed to make Sunday's final. Ichirou Shimura, Masami Ibamoto and Ryuuichi Arita of S.A.I. were friendly with countrymen Itaru Ishida, Tsuyoshi Ikeda and Jin Okamoto of www.shop-fireBall.com2 as they pile-shuffled before the start of Game 1, although they grew more serious as they were wired for the cameras.

The middle seat featured Ibamoto with an aggressive Black/Green deck splashing for Shatter and Stasis Cocoon. Where many teams dislike green, he has assembled an excellent team of green men. But what it showcases in powerful creatures and a Loxodon Warhammer, it suffers from not having as many early plays as it would like. Ikeda had a strong combination of flyers and affinity but lacked in ground defense. He also had a potential problem with two Tangle Spiders, which are excellent blockers for his Hoverguard Observers.

Ikeda won the flip, but Ibamoto started the game off with a Zealot, while Ikeda had no turn-two play. He then did a lot of calculating in an attempt to figure out how to deal with the Loxodon Warhammer that hit the board on the next turn. Ikeda settled on an aggressive strategy, perhaps attempting to lure his opponent into using the Warhammer prematurely at the expense of his board position and letting him return fire with a well-equipped 8-power Trinket Mage.

Despite this happy news, the Warhammer continued to elicit sighs from the other side of the table, as did the Zealot, which he was forced to allow to take away two cards. At this point, a judge stopped the match to point out that Ibamoto should not gain life from the Warhammer on the last turn because the Zealot was sacrificed with damage on the stack, preventing a 4-life swing. An Enforcer came out but bounced off a soon-to-be-quipped Tel-Jilad Exile, which waited for a Juggernaut to come out first and be sent in with the hammer.

A Darksteel Gargoyle came down for Ikeda, but Ibamoto not only began netting five life a turn off his regenerating Exile but also had a Tel-Jilad Archers to hold off any potential air assault - and his life total rapidly grew well above 20 when he drew his breakthrough card, Leonin Bola. With no answer to either piece of equipment, Ikeda decided to move on to Game 2 but kept a smile on his face.

Meanwhile, Okamoto seemed to be having better luck in the lefthand seat, with Arita down to one land with only lands as permanents, bouncing an attacker with Echoing Truth to stay alive for another untap step. Quicksilver Behemoth came out off of seven basic lands, but it was too little too late as a Sylvok Explorer got through for the win under the cover of Tyrannax.

As the other two matches sideboarded for Game 2, Seat A posed an interesting dilemma. Shimura was off to a lightning start in Game 2, but had to decide how to respond to his opponent's Culling Scales. Will he allow his opponent to catch up and only lose a little card advantage, or keep going and risk even more? He decided to let the clock run out on the Scales, even holding it down another turn with a feint from Chromatic Sphere so it wouldn't self-destruct while he attempted to draw lands (mana-burning for one in the process).

Shimura had a borderline hand for Game 2 and he wasn't afraid to show it, agonizing over the decision by putting his head on the table in thought before deciding that the hand could not be kept. When he looked at what he would have drawn, the hand turned out solid.

Game 2 started off with a Pyrite Spellbomb taking down Shimura's Thought Courier, after which a Battered Golem came out. A Talon of Pain started off in a quest to gain enough counters to take down Ishida's Slith Ascendant, and Ishida double-checked the Talon's wording, halting it in its tracks with a Stasis Cocoon. Trinket Mage attempted to answer, but without a Mountain the Spellbomb it gets will come too late to stop the growing Slith that was accumulating judge-supplied red beads as +1/+1 counters.

Shimura had a Skyreach Manta in his hand, but four of his five lands were Islands and it left him unable to make it big enough to block, raising the question of whether he should have gone for an artifact land instead of the Spellbomb. The decision was clearly bothering him, as he let out a huge sigh and appeared frustrated by his draw -- eventually deciding that playing the Manta as a 2/2 is a better option than not playing it at all.

Shimura assembled an army capable of doing damage through Tel-Jilad Archers, but decided correctly not to risk that and attacked with only Quicksilver Behemoth, doing four damage. However, Tel-Jilad Justice took down the Manta (the only card capable of blocking the Slith Ascendant) and S.A.I evened the match.

Meanwhile, it was the brawl of the century -- or at least the tournament -- as two Juggernauts, Nim Replica, Tel-Jilad Archers, two Tangle Spiders (one of which has Grafted Wargear and Battered Golem) charged into two Quicksilver Behemoths, Petwar Golem, and two Trinket Mages over in the Seat B matchup. Ikeda was attempting to talk through this battle royale out loud, suddenly unsure if he would win the game. His hands quickly moved creatures around the board in an attempt to calculate all the mathematical possibilities. The players definitely appreciated the humor of the situation, as creatures continued to be shuffled around and the commentators hooked up to the Japanese translators for direct quotes of the players' comments.

There was much to consider, as he had many options. Ikeda could attempt to deck his opponent, who had only two cards in his library, or perhaps swing back for the win. But what would he topdeck? Finally, blocks are declared, a Nim Replica is sacrificed, brought back with a shard and replayed, sacrificed again, and the Pewter Golem went down. With no team left to block the next turn, spells doomed Ikeda and the semifinals were even at one match apiece.

A spot in the finals rested on the Seat A matchup. Ishida put down a Chittering Rats to go with his Thought Courier, which was pitching excess lands early in the deciding game. Shimura gained life off a Leonin Elder, going up as high as 27, and played a Leonin Bola that had the potential to take control of the game. Ishida started playing out his flyers.

The mood seemed far more serious now, as joking had been put aside by newcomers and veterans alike. Spire Golem complemented various Hoverguards, creating an air force too large for the Bola to stop. Vulshok Sorcerer came down to kill the Courier, but it had already netted five card draws in exchange for five unnecessary lands. 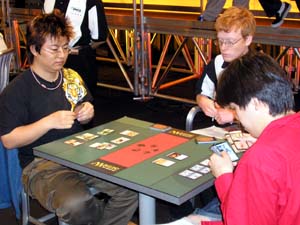 Before the Sorcerer could do any further damage, Essence Drain took it down and the flyers started in on Shimura's life total. Loxodon Anchorite attempted to help stop the bleeding, but a second Essence Drain took it out. Thanks to the special ability of Advanced Hoverguard, it continued to get through for two damage a turn while Shimura was unwilling to sacrifice an artifact to his Thermal Navigator. Things could have gone along in this fashion, but with a new Fleshgrafter and Blind Creeper, Ishida decided to send in the ground assault troops as well, leaving back only Alpha Myr. The attack drew out an Awe Strike, getting in two damage but clearly could not be repeated with the loss of the new creatures.

Shimura fought valiantly, but flooded on mana and after a series of relatively even trades was left with only the Bola and a pair of 1/1 creatures. Despite the life gain, he never had much substance in his draw that did not get removed by the Essence Drains, and card selection took its toll. While flying creatures may have won this game for Ishida, the long-dead Thought Courier was its real star.

1 Wail of the Nim