Share Article
Share Tweet Share
DeRosa is one of the loudest Magic players ever, normally a pleasure to have at the Feature Match table. Shuuhei Nakamura is a typical Japanese player, therefore both brilliant and quiet. The noise level is quite a contrast and it makes for an extra layer of fun, watching DeRosa mimic his jokes for Nakamura.

The Italian-American is playing Goblins with Black while Nakamura is packing Red Deck Wins. Let's see if his deck name turns out to be right for this round. 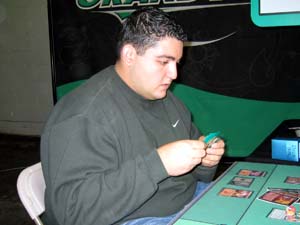 Antonino is working on his Japanese.

On Game 1 they both came out just like they wanted to: Nakamura with the classic Pup, Fanatic draw - although he missed his second land drop while Antonino had Aether Vial and Goblin Piledriver.

The Japanese settled into the usual game plan. He used his burn spells to clear the path for his attackers. DeRosa used Duress to pluck Seal of Fire and figure out he should announce "Cursed Scroll" with his Cabal Therapy. That completely blew Nakamura's hand. The Vial brought in Goblin Flunkies and Goblin Warchief. That blocking duo put a stop to any plans the Japanese might have.

Soon the Antonino was in full control. At tne life he started pumping out Goblins like there was no tomorrow. Luckily for Nakamura he had a "tomorrow": the next game.

Game 2 got out to a slow start with Nakamura playing a turn one Mogg Fanatic. DeRosa had to take a minute to think his first turn, but earned extra style points by apologizing in Japanese for his delay.
He settled on playing a fetchland which proved a good move when Shuuei dropped Rishadan Port.

A cycled Goblin Incinerator got rid of the Mogg Fanatic and the best the Japanese could find to replace it was Grim Lavamancer. Nakamura's deck was not putting any decent pressure on the Italian-American. Despite the two Rishadan Ports Antonino had enough life and time to start unfolding his plan.

Out came Goblin Warchief and Nakamura didn't trade his new Mogg Fanatic for it. The reason was soon clear: he had in hand. Suddenly he had a clock. But did he have any time left. DeRosa's Aether Vial reached critical mass (three counters). 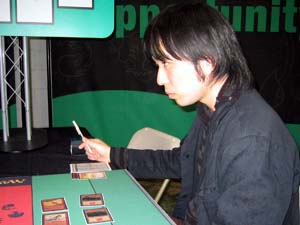 The Japanese had no choice. He had to keep clearing the path for the Kavu. Despite having an active Vial DeRosa had no blocker for the Kavu. He fell to twelve. On his turn he dropped three blockers, hoping to keep the Kavu at bay long enough to clog up the table. With only two cards in hand Nakamura took his time surveying the table. When the dust settled none of them had creatures but Antonino had a full hand. Things were not looking up for the quiet Japanese.

He was out of steam and Antonino DeRosa didn't give him an inch. On the next turn he unleashed Siege-Gana Commander and Goblin Warchief and before he knew it Shuuei Nakamura was using his turn to stop the incoming army. That's never a good sign for Red Deck Wins. They went through the motions but their minds where already on the next round. This one was as good as over.