Share Article
Share Tweet Share
the classic battle between speed - Joshua Ravitz Garza's Red Deck Wins - and control - Jeff Garza's Rock - Joshua got of to a fast start: Grim Lavamancer, Mogg Fanatic and a Wasteland for Garza's Treetop Village. When he followed that with Rishadan Port Jeff Garza visibly slumped in his chair.

The best he could do was try Cabal Therapy, calling Blistering Firecat and missing. Slowly he tried to climb out of his mana problems, with Ravitz unable to find any extra pressure. Eventually Garza reached four open mana and used to cleaned the table at thirteen life. 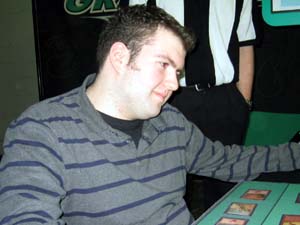 Another Cabal Therapy got Fledgling Dragon out of Joshua's hand and Ravenous Baloth came in to hold the ground. The Red deck had lost control of the table. Ravitz tried going to the dome but Garza quickly upgraded his clock with Kokusho, The Evening Star.

The second game got off with a double mulligan for Garza (he only had one land on the first hand and was so fast on the second one I had no chance to check).

Jeff: "I probably should have kept the first one."

His first land was Treetop Village and Ravitz quickly took it away. Still he made his next two drops while Joshua Ravitz couldn't find any creatures to play. For a moment there, and despite the active Rishadan Port, Jeff Garza started to believe. His third land was a non-basic and once again Ravitz had Wasteland.

The game all came down to Ravitz finding a constant source of damage (i.e., a creature) or Garza finding enough lands to play out his spells.

Jeff: "I haven't played any spells this game. This is no fun."

By then Ravitz had two active Ports and pretty soon he found Sulfuric Vortex. Between that and Garza's inabilty to find another lands the game was over in a few seconds.

With the crowd gathering, they sideboarded and shuffled up for a third - and decisive - game. Garza started with Birds of Paradise and Ravitz promptly shot it down. Like the two games before this seemed to be all about a fight over the mana.

Jeff got funky with a third different basic land (this time Island, promising Chill) and... Bottle Gnomes. Ravitz send it away by playing Sulfuric Vortex. and Ravenous Baloth showed up as an answer. Joshua Ravitz shot the Baloth down before Jeff Garza could untap. 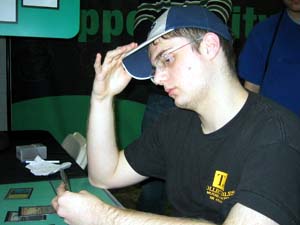 Garza agonizes over his next play.

The Vortex kept ticking while the jockeyed for position and Garza - slightly ahead in life - refused to blow the Deed. The tense game and the huge crowd seemed to be getting on Jeff Garza's head. He kept shifting in his chair and mumbling while deciding what to return with Eternal Witness. He finally settled on Ravenous Baloth.

Ravitz tried to control his mana but between in his own Sulfuric Vortex and the Witness he seemed in dire straits.

The Vortex brought Joshua Ravitz down to two and his last card brought no help. As sson as the game started Ravitz had to explain his plays to his friend Mike Flores.