Share Article
Share Tweet Share
certainly one of the big stories at Grand Prix Boston today: The Japanese are taking over the world! Ok, at least they decided to cross the Pacific and test their game against the Americans. Some of the biggest names in Asian Magic are here today, stringing a few English sentences together to explain to their opponents what the hell they are trying to do. 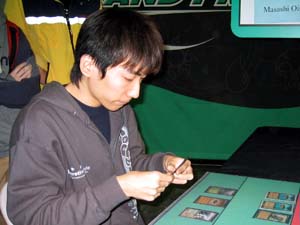 Masashi sets up his combo.

Fabiano was clearly unhappy with his first hand and hardly glanced at Oiso before sending it back. Oiso's Aluren deck came out with a first turn Birds of Paradise before losing it's name card to Duress. Gerard tried to destroy Masashi's hand further with Cabal Therapy but the Japanese had found Brainstorm and used it to protect his best spells.

Out of discard spells, the American decided to try beating down. He played two Goblin Piledrivers and Aether Vial. But Masashi Oiso was ready to close the deal. He tapped out to play Aluren, used Cloud of Faeries to untap two lands and fire Living Wish. Out came Auriok Champion.

From then on it's almost irrelevant. Intuition gave Oiso , which gave him something like one million life points. On the next turn he used Living Wish to get Maggott Carrier. He went through the motions and seemed a bit scared when Fabiano wouldn't scoop. The American jokingly waited for the Japanese to scoop his cards, although he was already at zero life. Oiso seemed puzzled until the crowd started laughing and Fabiano cracked a smile.

Fabiano did a small poll amongst the crowd and found out most spectators agreed with his gut feeling: he had no chance against Oiso.

Still, he came out fast hoping to steal the game before Masashi could set up his combo. Skirk Prospector and Goblin Flunkies hit the table before the Japanese had a chance to play any spell. He took his time resolving Brainstorm and then tried Cabal Therapy, missing. That gave Gerard Fabiano another turn.

Another turn meant two more Goblins. When Masashi only played a "comes into play tapped" land on the next turn the American sat up on his chair: the game was certainly going his way. At the end of his turn he left Oiso one swing away from losing the game, with two Mogg Fanatics on the table (quite useful for , and such). 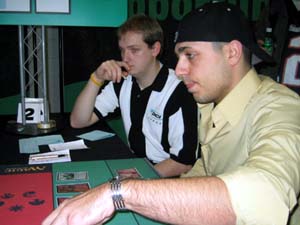 Oiso Brainstormed for some help and used Vampiric Tutor for the perfect help. He tapped out and went for it. Aluren got his Auriok Champion into play. Raven Familiar and came in next. Fabiano tried to get it out of the loop with Mogg Fanatic but Oiso had the crucial Eternal Witness to get it back.

The Raven Familiar and duo went through Masashi Oiso deck looking for the rest. Fabiano sat through it all with a very serious face, making the Japanese roll out the combo.